Winning by Not Losing: Behavioral Finance

Since my first day at Wharton, in August of 1998, my sole focus has been to learn the craft of investing.  This focus taught me that discipline is often the most important thing that separates truly superior investors from average investors.  Not brilliance, not amazing insight, not whatever else the talking heads on CNBC might be selling you, but discipline.  The study of mistakes, and how to try to avoid them, has formed our risk management philosophy of winning by not losing.  Today we outline what we view as the biggest mistakes that we seek to avoid, and how we attempt to avoid them.  The key, we believe, is to study not just our investments but more importantly ourselves and our own psychology.

“It’s remarkable how much long-term advantage people like us have gotten by trying to be consistently not stupid, instead of trying to be very intelligent…You can learn to make fewer mistakes than other people - and how to fix your mistakes faster when you do make them.” – Charlie Munger

Daniel Kahneman and Richard Thaler (pictured below) are Nobel-prize-winning economists who have helped investors better understand hidden dangers and biases that lurk in all of us that, left unchecked, may threaten to keep us from our long-term investing goals.

They, and others like them, research and publish in the field of “Behavioral Finance,” which is essentially the study of how people make decisions and how that might impact security prices.  Their work has consistently shown what I have learned in the markets over many years: investors are not always rational and are prone to making common mistakes.  Study these common mistakes if you want to avoid them.  A good place to start is in their published books, such as Kahneman’s “Thinking Fast and Slow.”

Both authors outline how our irrational, faulty wiring left to its own devices can lead to common and predictable mistakes.  While there are many we could discuss, we believe that the two most important ones to understand right now, ten years into what is the second-longest business cycle in post-war history, are recency bias and overconfidence bias.

Recency bias is straightforward: people tend to give undue weight to the value of recent information and the latest results while systematically undervaluing older experiences.  This is an especially troublesome bias in my view, because it develops in many observers the belief that they can extrapolate recent events into the future.  At peaks, this leads investors to assume the good times will continue.  At troughs, those who succumb to this bias can make the mistake of assuming things will keep getting worse.  Investors who seek to be rational in evaluating their investments and their prospects must rise above this emotional roller coaster.

We often see the most corrosive combination possible in the later innings of a strong upcycle, when recency bias combines with overconfidence bias.  Overconfidence bias could be thought of as another form of recency bias, where a long streak of strong results since the 2009 low could mislead investors to forecast more years of strong returns.  We believe that such thinking could be flawed because it could fail to appropriately estimate the downside from highly appreciated investments, particularly if they are held in an overly concentrated portfolio.  Oftentimes, while such an approach can find success in a raging bull market, it can contain within itself the seeds of its own failure when the cycle reverses.

We believe that a better way to invest is to proactively take less risk as we get deeper into what is already the second longest business expansion in post-war history.  We have taken several concrete steps to do so which include 1) reducing risk by lowering the beta (volatility versus that of the market) of our 100% equity flagship model portfolio to 0.71, its’ lowest in our firm’s history, 2) identifying select investments we believe may prosper during challenging economic times, and 3) increasing our ownership of the highest quality bonds, such as U.S. Treasury bonds - especially those of longer maturity.  With our current investment positioning, we are trying to not only avoid “owning problems,” but are also seeking to “get long the solution” – by owning investments that have a history of profiting during challenging times.

We strongly believe that a foundational aspect of our risk management is the judicious ownership of U.S. Treasury bonds, particularly those of the longest duration.  These bonds have shown their diversification merit recently.  As the chart below demonstrates, treasury bonds have been consistent performers over the last nineteen years, even outperforming the S&P 500! 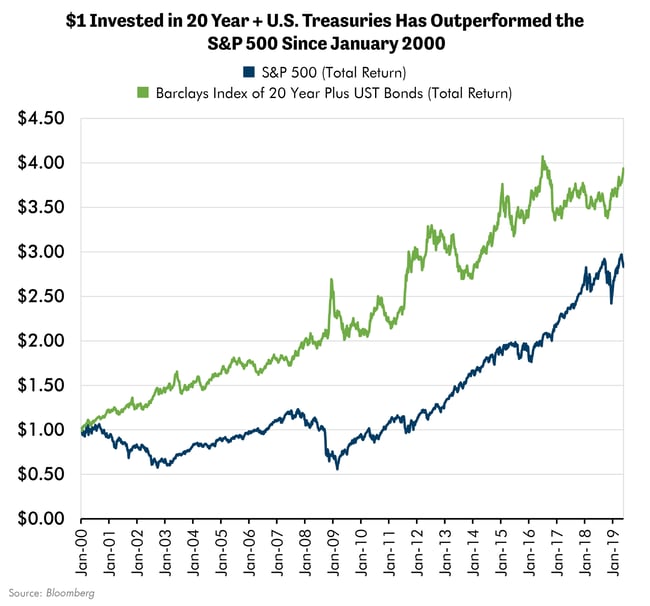 Bonds’ outperformance is the most dramatic in the months just preceding a recession.  Why?  Because the market looks ahead attempting to anticipate an uncertain future.  One of the most common aspects of prior recessions appears to have been the Federal Reserve’s efforts to limit a downcycle by lowering interest rates.  For bonds of the highest quality and longest duration, such as U.S. Treasury bonds, falling short-term interest rates have historically led to startling outperformance and excellent diversification for an equity heavy portfolio, as the table below demonstrates.  In fact, U.S. government 30-year bonds outperformed by 89% and 88% respectively the falling stock market from the peak that preceded the last two recessions. 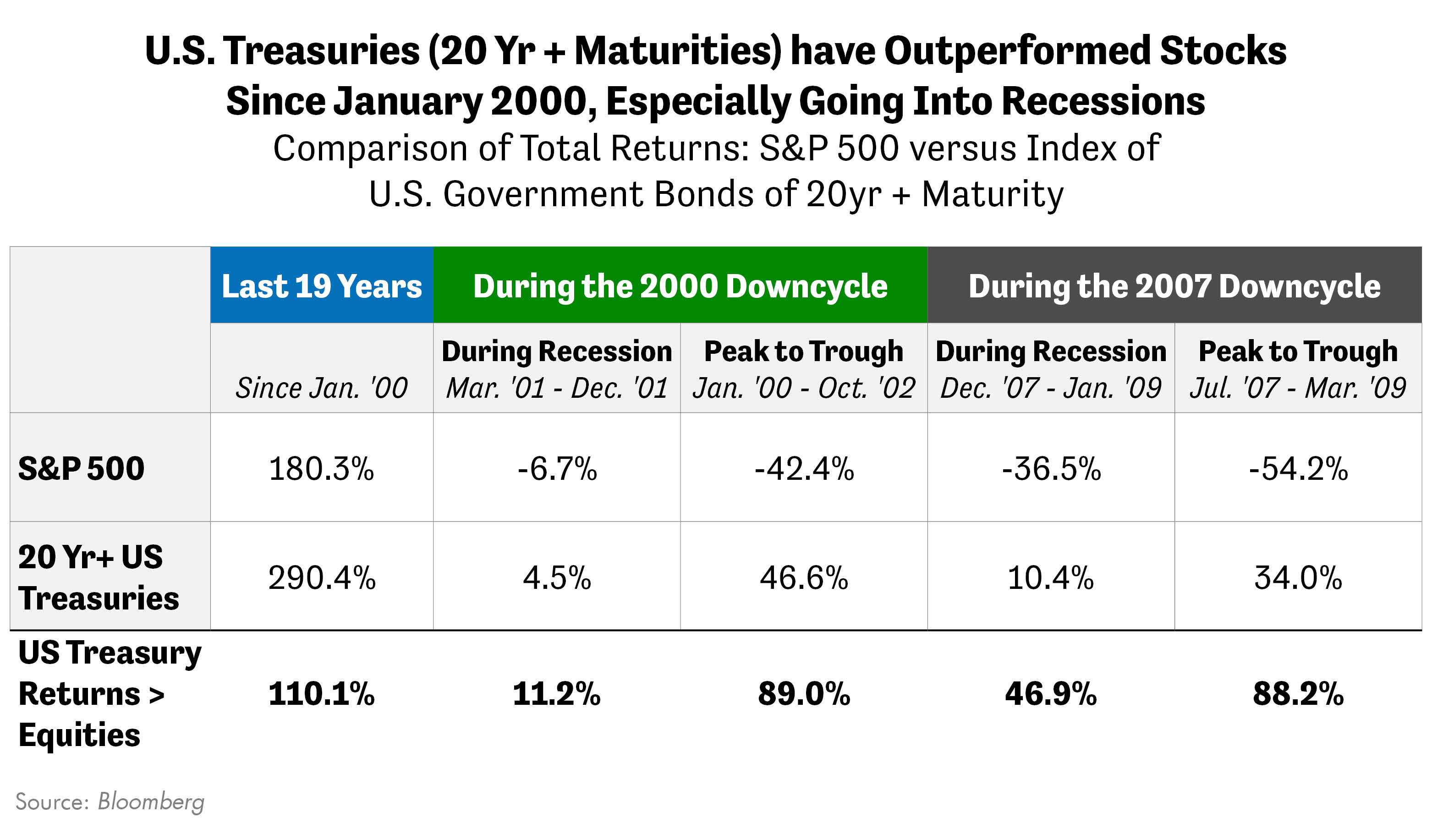 I can think of no better diversification argument for U.S. Treasury bonds than the table above.  We think it means that such bonds can help investors avoid the devastating peak to trough equity declines that preceded the last two recessions.  To recover from these equity drawdowns, it seems investors would need to earn returns of 74% to get back to even from a 42.4% decline following the Tech Bubble and returns of 119% to recover from the 54.2% loss during the Global Financial Crisis. Respectively, to break even from such a decline, an investor would have had to wait four years (from October 2002 to October 2006) and three and a half years (March 2009 to January 2013).

How much better would it have been during this time for such investors to profit from their ownership of U.S. Treasury bonds?  I hope that the analysis above demonstrates why we have consistently argued for the diversification merits of such bonds.  But oftentimes, investors must overcome recency bias and overconfidence bias if they are to enjoy these diversification merits.  No one said skillful investing would be easy!

"What we achieve inwardly will change outer reality." -Plutarch

Our own flawed human psychology may very well be the single biggest threat we face in meeting our long-term investment goals.  The greatest mistakes I have seen people make are getting too bullish at the top and staying too bearish at the bottom.  We believe a disciplined approach to valuation, and proactive asset allocation, can mitigate this risk – but cannot eliminate it.  Furthermore, because markets are so forward looking, investors must learn to move ahead of the news if they seek to achieve the best results.  This is difficult.

As you study your investments, do not neglect the discipline of going further.  Understand yourself, too.  In the study of the risks you face as an investor, it is unwise to neglect the most ubiquitous risk that you face in uncertain markets.  After all, one common risk factor that holds true across all your investments – is that you own them!  You must remain disciplined.  You must resist the harmful biases we outline above that could keep you from the long-term success that you seek.

The investing scars I bear testify to what I have learned: the merits of “winning by not losing.”  I would save you from a similar experience, if I could.  In our attempt to do so, our research team seeks not to achieve brilliance but rather to do whatever we can to avoid mistakes, one decision at a time.  We strongly believe that the path to long-term success begins with a better understanding of one's own biases.