You don’t see that everyday! On February 17, the price of electricity in Houston closed for next day delivery at $8,786 per megawatt hour (mwh). Normally, at the peak of summer air conditioning demand, prices top out at $70 per mwh. Winter prices typically run in the low $20 range. Imagine getting a power bill based on the mid-February price? Many in Texas will during their next billing cycle. To put it into context, imagine pulling into a gasoline station to fill up your car and the pump ringing up a $12,000 charge for 15 gallons of gasoline! Ouch.

In Texas electricity is produced by the remaining coal plants that have not been shut down, nuclear, wind, solar and of course natural gas. Natural gas is the swing producer and therefore ultimately the electricity price is set by the natural gas price. It is the same way in much of the United States.

When our Chief Investment Officer, Lewis Johnson and I worked for one of the oldest and well known commodity trading houses in the world, we had a front row seat into how power and heating fuel prices are derived. That company had a several football field size room of traders, many of whom were trading electricity and natural gas markets in North America. Gas and electricity are produced all over the continent and are shipped by pipelines or transmission lines from where they are produced to where they are consumed. Production usually tends to be relatively steady over the short term while demand varies considerably. Different regions experience hot or cold weather that can dramatically impact their need at any particular time. In general, in the summer air conditioning demand is the key driver and in the winter it is heating.   Where the heat and cold shows up unexpectedly are where consumption spikes occur and thus opportunities for traders arise.

How Prices Are Set

The traders had access to all the buying and selling points on the continent (known as “hubs”) and made a good living arbitraging differences in demand at different hubs. That is, for example, when they saw that the price of gas for consumption in Texas was higher than the price at which they could buy it in Pennsylvania, pay the pipeline fee and sell it in Texas, they would do just that.   It was fascinating to see the intricate mathematical models they had designed to predict prices at all the different hubs in North America. Besides traders, analysts and meteorologists, the company employed a lot of math PH.D.’s to figure it all out. After all, there are hundreds of places on the continent to buy and sell gas and electricity whose prices were all inter-related with arbitrage opportunities. They were also connected to coal and even heating oil to some extent and many hubs could be traded in futures markets. Traders' activities usually efficiently and smoothly allocate the energy resources to where they are needed at reasonable prices. Usually, but not last week. Last week the system did not work. Is this telling us that something is wrong? Have assets not been allocated properly to deal with weather contingencies? Is there an opportunity in this for astute long term investors?

Certainly, the weather in Texas was a major culprit. The state had its coldest week since 1998, nearly 40% colder than the peak in 2010. No wonder it is being called climate change rather than global warming now. However, the rest of the country, even most of the Midwest did not set records, so the hub traders should have been able to move power and gas where it was needed, shouldn’t they have? In fact, the Northeast, which is a major gas heating area was just about average temperature wise during the period. So, it seems reasonable to wonder whether the situation in Texas is indicative of a structural problem.

Last week, natural gas and electricity trading hubs saw prices that exceeded previous highs by shocking amounts. As noted above, electricity prices in Texas shot through the roof. Natural gas prices at hubs in the region were just as extreme. The Oneok Hub in Oklahoma traded up to nearly $400 per mcf on February twelfth and over that weekend. That location had previously spiked to an at the time unbelievable $33 per mcf in the winter of 2014. 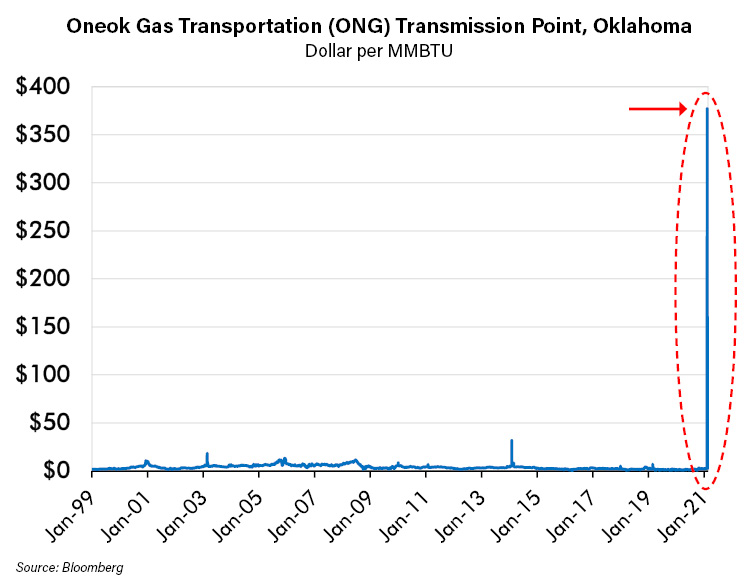 However, lest anyone think those prices were confined to the Texas area, the price of natural gas in Chicago reached $94. In Pennsylvania, an area where its main demand centers in the Northeast were experiencing normal weather, prices hit $8, nearly $2 higher than during the cold 2017 Northeast winter.

So, what exactly happened to cause the crazy prices? According to the data, it appears that wind power, which has grown to be a significant part of Texas’ generation stack, failed as shown in the charts below. At times, over the winter, wind had comprised up to 40% of generation. Around February 9th wind failed. The windmills froze from the very cold temperatures. They were unable to operate. At that point, as the chart on the upper left shows, natural gas took up the slack. Unfortunately, soon thereafter gas failed as well due to gas processing and pumping equipment freezing or losing electricity. Apparently, over the past decade, in order to lower carbon emissions, Texas switched powering its gas facilities from readily available gas to electricity. This change appears to have been costly. 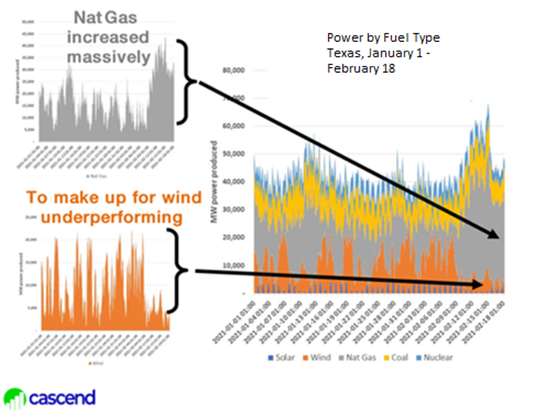 So, that seems to explain what happened in Texas. Interestingly though, extreme events impacting the power grid have not been confined to that state or even the United States. In January, Europe experienced some very cold albeit far from record temperatures.  Germany, which we noted in our publication on Uranium in November is aggressively pursuing renewable electricity generation while also phasing out its nuclear fleet, had some serious problems early in the month. Similar to Texas, much of its wind power was unable to operate in the cold. Also, solar power generation fell dramatically because snow blanketed solar panels in many areas rendering them inoperable. According to Bloomberg, the surge in demand and lack of supply led to a situation that came very close to causing a blackout all over Europe. Crisis was averted luckily as the weather turned warmer just in time. Nevertheless, as shown below, natural gas, which is the main heating fuel in Europe and an important electricity generation fuel as well, spiked to nearly $12 per mcf. 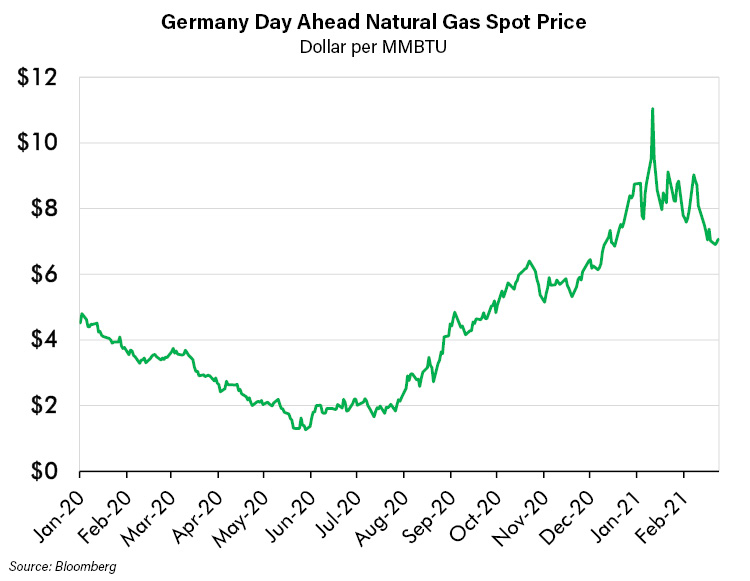 Europe was not the only place that has encountered potential blackouts and extreme pricing as a result of an apparently more unstable grid. Australia had a blackout in 2016 that was nearly catastrophic as well and Lewis Johnson wrote about problems this past summer in California in a Trends and Tail Risk titled “Good Intentions”.

Transitioning to a Carbon Neutral World

The crux of the problem may be explained in research recently published by commodity specialists Goehring & Rozenwag “Ignoring Energy Transition Realities”. We became familiar with the company’s founder, Lee Goehring, more than two decades ago when he was one of a handful of commodity specialists who we learned to trust for deep research and astute insight. In the report cited above he explains that in pursuing a carbon free environment, the world is embracing policies and technologies that are too costly and not nearly as beneficial to the environment as advertised. Renewables are not actually renewable because the windmills, solar panels, batteries and other equipment need to be replaced. That takes a lot of energy. Also, there are externalities that are not counted such as the environmental damage done while mining lithium for batteries, for example. As such there has been a misallocation of resources that has wasted a lot of money and may be creating a suboptimal energy system.

The message is that the best the world could do from the perspective of keeping costs down and lowering carbon emissions would be to embrace nuclear and natural gas, including liquified natural gas for regions that do not have their own supply. There is really no other option until cost effective battery storage technology becomes available, which does not appear to be on the horizon and perhaps will not be for a very long time.

Today in the investing world certain things do not seem real or possible. Negative interest rates have turned hundreds of years of economic and financial theory upside down. Companies with no revenue have market capitalizations of several billion dollars. Those that consume billions of dollars of cash every year with no reasonable end in sight are given market capitalizations of tens of billions of dollars. New forms of money that are not well understood and are impossible to value are nearing a trillion dollars in total valuation. Much of this does not seem real. Entirely eliminating carbon without bankrupting the world may be something that also is not possible in reality. On the other hand, the need to heat homes in the winter is real as is the need to keep electricity flowing. Civilization depends on it. Perhaps there has been too much capital chasing unreal things that has left real needs unmet? As always, we think there is opportunity in potential solutions. This is especially true since in the case of power and energy, in addition to new technologies and innovations, many of the solutions are well understood, simple and currently cheap. They likely will not remain so for long. We intend to invest accordingly.