In true to form life imitating art, the Three Mile Island nuclear accident occurred in 1979 only 12 days after the theatrical release of the “China Syndrome,” a movie that premiered to awards at the Cannes Film Festival. The movie was about a nuclear reactor meltdown at a power plant in California. After three decades of positive publicity for nuclear power and widespread public approval of this cheap energy source, the movie was expected to introduce the public to the dangers the industry posed. In fact, its promotions stated that few people knew what a nuclear reactor meltdown was but “soon you will know!” Jack Lemon won the 1979 best actor award at Cannes for his leading role in the film and he and co-star Jane Fonda got Oscar nominations for best actor and actress, respectively for their roles that same year.

The movie was about a nuclear reactor meltdown that threatened the safety of Los Angeles and the attempts by insiders to hide the danger from the public. Unbelievably, just a few days into the movie’s theatrical run, the world was introduced to the first known accident at a nuclear power plant when a reactor near Harrisburg, Pennsylvania owned by a predecessor to today’s First Energy Corporation called the Three Mile Island Nuclear Plant experienced a partial meltdown.

Had social media existed back then it probably would have been flooded with conjecture about conspiracy theories connecting the movie to the real-life event. Instead, both events catalyzed a world-wide down cycle in enthusiasm for nuclear power due to its potential dangers. Two subsequent reactor accidents, one at a reactor in the Ukraine known as Chernobyl and one following a tsunami that destabilized a reactor in Fukushima, Japan gave further gravitas to claims that nuclear energy should be abandoned.

Environmental activists, mostly in the developed world, were successful in closing down some reactors and thwarting the development of others. Germany in fact decided to wean itself from nuclear power entirely (deciding after the Fukushima Tsunami to move up its sunset date for all plants to 2022 from 2036).   However, countries in the developing world, hungry for cheap electricity to accelerate their industrialization, continued to build new plants. Nevertheless, from 1990 through 2014 more nuclear plants closed than opened.

Nuclear power has remained an important part of the world’s energy needs. In France it accounts for 72% of electricity generation and its neighbor Belgium derives nearly 40%. Many countries such as the United States, Russia, Canada and the United Kingdom are in the very material 15-25% range. Many developing countries are building new reactors and will likely make it into that range as will Japan when it restarts some of the reactors that have been shut down since the Fukushima accident.

This brings us to the market for the fuel that runs nuclear reactors, uranium. The element uranium is mined throughout the world but mostly in Kazakhstan and Canada, the world’s low-cost producers. The uranium market has been depressed for most of the past decade due to the above-mentioned net negative additions of nuclear power plants, the shutting down of the entire Japanese fleet after Fukushima, supply increases from a boom in prices in 2006-2007 and conversion of Russian weapons grade uranium to civilian use. A lot has gone wrong in uranium for a long time. As value investors, this is music to our ears because long downcycles can be followed by surprisingly strong upcycles. 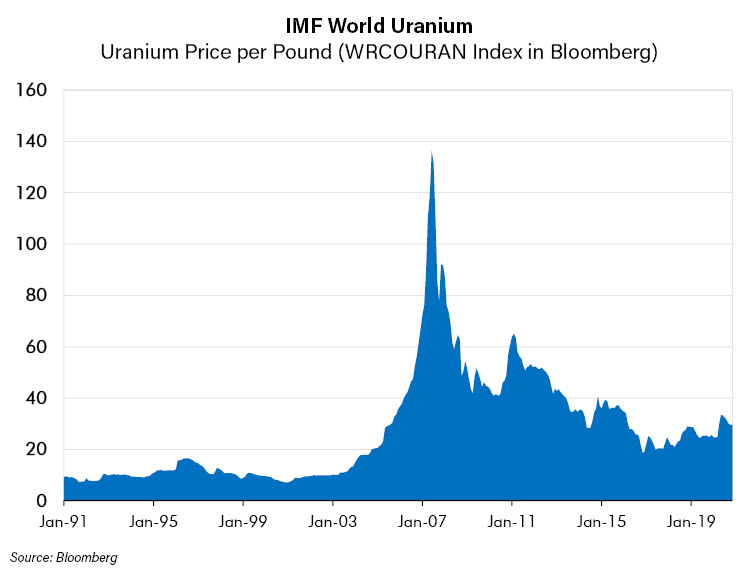 We believe it’s likely that the worst is behind the uranium market and a new boom could be underway. If we are correct, the price of uranium and in particular the share prices of uranium producers are likely to benefit.

There are several reasons we are bullish on uranium. First, the best cure for low prices is low prices. Low prices drive reduced investment in new production. Over time this should lower supply. Occasionally, important producers can take intelligent action to hurry the cycle along through their own actions to help turn the pricing cycle from down to up by curtailing production. We love it when we find such situations, because in our experience they are rare. We believe we may have found such a situation in uranium today, as we explain below.

Dominant producers can manage supply by curtailing excess production in order to help support prices. However, it is rare to see a producer dominant enough to single handedly impact the market with its own production discipline.   To our knowledge, this has only happened twice before in major markets. It happened when Saudi Arabia, through its dominant position in oil, formed the OPEC cartel and began limiting oil production. It happened again in the 1990s when the Potash Corporation of Saskatchewan cut production of potash. Dramatically improved economics followed both of these market-moving changes. We believe it is possible that a similar trend could be underway now in uranium. Kazakhstan is the Saudi Arabia and Saskatchewan of uranium, producing nearly 40% of the world’s total.   The country recently took public its formerly nationalized uranium producer, the crown jewel of the country’s economy.   This newly public company appears to be following the playbook of Saudi Arabia and Saskatchewan by cutting its production by 20%! Our research team takes this as a strong statement about the company’s determination to do whatever it can to try to firm up the pricing cycle of uranium.  Such production discipline at a dominant producer could be a rare and meaningful signal that the company is determined to improve its future economics and is willing to sacrifice to make that happen.

This could support prices in the short-term along with temporary COVID-19 related shutdowns at other important mines elsewhere in the world. In the longer term, the extended period of low prices has driven reduced capital investment. This has led to production costs that appear to be favorable to higher prices in the future. We describe our analysis below by referencing the global “cost curve” for uranium. We explained how the cost curve helps determine the price of a commodity in a previous Risk On - Risk Off report. The curve represents the price at which suppliers can be profitable, beginning with the lowest cost producers on the left side and the highest on the right. Below is the cost curve for uranium according to BMO Nesbit Burns, a Canadian investment bank.

Our interpretation of the uranium cost curve suggests to us that producers need a price of greater than $60 per pound to invest in new production. 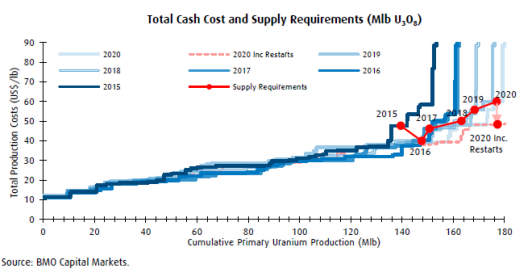 The Outlook for Demand

With what we believe is a bullish supply situation, our attention turns back to demand. We believe demand is likely to grow at a fast enough rate to keep a tight relationship between supply and demand, pressuring prices higher. This is because nuclear power is a cheap and clean source of energy in a world with substantial demand for cheap and clean energy. This is already showing up in the numbers. As indicated in the chart below, since 2014 new nuclear power plants have exceeded shutdowns, albeit modestly, every year, reversing the trend that first appeared in 1990. We think this is an important change!

We expect this emerging trend to continue and accelerate as developing economies build more nuclear reactors. Four hundred and forty plants operate around the world today while 59 are under construction and 160 are in pre-production planning. That is a 50% increase if all are built and commissioned! Given scheduled shutdowns, the trend of growth since 2014 could accelerate sharply over the next several years. In addition, the Japanese fleet that was idled after the Fukushima tsunami is beginning to come back online. Although 33 of Japan’s 54 reactors will probably never restart, 9 have already been brought back online and 12 more are expected to restart. If so, this will add to uranium demand. Also, given the difficult power situation in Europe, it is possible that Germany will need to delay the 2022 closure of some of its remaining plants.

We are favorable on uranium’s fundamentals for the reasons above. We believe the uranium sector may represent a special situation where we could have multiple ways to win by investing. Our thesis is reinforced by our expectation that the macro-economic environment is poised for a real asset cycle due to unprecedented government fiscal and monetary stimulus around the world. The prices of gold and residential real estate have already improved. We think other hard assets and commodities will follow.

We believe uranium will be one of them. Its fundamentals could be primed for improvement after a long downcycle. The several decade bear market in environmentalist enthusiasm for nuclear energy may be changing because of their greater aversion to carbon emissions. That should help demand. This is especially true given our view that a slow growth, over-indebted world is desperate for cheap energy and the current lowest cost energy source in most places is carbon intensive fossil fuel. A key part of our thinking is that uranium supply is now being curtailed by the dominant Kazakh producer. The actions now underway in Kazakhstan could significantly and positively impact the supply/demand balance. If we are wrong and demand growth takes longer to return, favorable actions to curtail excess supply could help to limit risk should we be early in this investment. To our research team, this combination is a favorable balance of risk and reward, which is why we are bullish on the uranium sector.

CWA Asset Management Group, LLC is an SEC-registered investment adviser, doing business as Capital Wealth Advisors and as blueharbor wealth advisors.  Fundamental Global Investors, LLC is a SEC-registered investment adviser that is affiliated with CWA Asset Management Group, LLC. CWA’s ADV 2A can be accessed via https://adviserinfo.sec.gov/. Information presented is for educational purposes only and does not intend to make an offer or solicitation for the sale or purchase of any specific securities, investments, or investment strategies. Clients of CWA or Fundamental Global Funds may hold a position in securities mentioned within the articles. Investments involve risk and unless otherwise stated, are not guaranteed. Nothing herein should be interpreted as investment advice. Be sure to first consult with a qualified financial adviser and/or tax professional before implementing any strategy discussed herein. Specific companies or securities described in this report are meant to be illustrative of investment style. Such case studies are not meant to be, and may not be, representative of any portfolio or holdings of CWA Asset Management Group, LLC, or Fundamental Global Investors, LLC.