“Never interrupt your enemy when he is making a mistake.”

I have studied Napoleon Bonaparte, one of history’s most interesting people, since I was a teenager.  By sheer genius, relentless opportunism, and incredible force of will, Napoleon rose from a poor boy at military school to be the Emperor of France.  He harnessed the power of the French Revolution to create the largest empire Europe had seen since the death of Charlemagne one thousand years before.  Napoleon’s creativity and success on the battlefield was unmatched.  He remained unbeaten for decades.  Two centuries later, his tactics and strategy have lost none of their brilliance.

Perhaps the best example of his genius was Austerlitz, also known as the Battle of the Three Emperors, where Napoleon crushed the combined armies of Russia and the Holy Roman Empire who opposed him.  He did so by creating a powerful, but false, narrative to lure his opponents into the trap he set for them. The outcome was one of the most one-sided victories in all of military history.  In this week’s Trends and Tail Risks we examine this famous battle to better understand the dangers we believe are hidden in the false narrative of all-powerful central bankers.  If investors are not careful, they too risk defeat at the hands of the market, one of the most ruthless and formidable opponents anyone has ever faced. 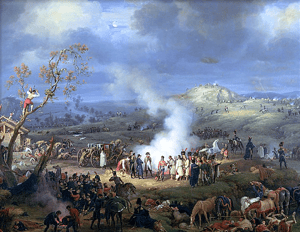 Napoleon actually arrived first at what would become the battlefield of Austerlitz, located in what is now the Czech Republic.  He studied its topography very deliberately because he needed to force a decisive victory over the superior force of the combined allies who faced him.  Napoleon was already a military legend by then.  His unbeaten track record terrified his opponents into overwhelming caution that made it almost impossible for him to strike the overwhelming blow he sought.  How could he enflame their rashness and goad them into committing their forces into the fateful battle he needed?  Napoleon set about crafting a compelling - but false - narrative to feign weakness and lure his enemies into a brilliantly devised trap.

Napoleon abandoned the high ground of the plateau of the Pratzen Heights and assumed the inferior lower ground.  His foes were delighted that finally Napoleon had made a costly error!  Napoleon further weakened his strategic position by deliberately thinning the forces of his extended right flank. His opponents did not know that reinforcements were en route who would support his weakened right flank before the battle was joined.  Napoleon also concealed much of his reserves and cavalry behind a hill, called the Zurlan, on his left flank.  His plan was to feign weakness at his right flank to incite a bold, and risky, attack by his enemies.  His hidden forces would strike the enemy’s center while it was disorganized and cut the enemy force in two.

The allied generals gathered for a conference on the eve of the battle to plan their strategy.  The more experienced, and wiser, generals among his opponents urged caution but were shouted down by the young firebrands among them.  These hotheads found Napoleon’s show of weakness too alluring to ignore.  Finally they had Napoleon exactly where they wanted him.  This was the opportunity they had been seeking!

The dawn of December 2, 1805 broke brilliantly but took its time burning through the shroud of fog that hid many of Napoleon’s forces stationed below the Pratzen Heights. Napoleon was, as usual, outnumbered by his foes. He commanded 66,800 troops versus the 85,400 that faced him.  The impetuous allies struck first at the deceptive weakness on his right flank, falling into his trap.  Marshall Davout arrived just in time to reinforce Napoleon's right flank. The allies weakened their center, effectively splitting their army in two, to commit more of their forces for what they were convinced would be the knock-out blow. The rising sun revealed the unseen threat of Napoleon’s troops facing the weakened allied center. A desperate pre-emptive attack by the allies failed to blunt Napoleon’s forces. The combined French forces would re-form to split the enemy army into two pieces and craft one of history’s most tremendous routs. Final casualties totaled 27,000 for the allies and 7,000 for Napoleon. Napoleon had achieved the decisive battle he sought.  His chief weapon was the allure of the false, but deceptive, narrative of weakness. His opponents’ own rashness and over-confidence sealed their fate. Is there a parallel in today’s financial markets? We believe that there is.

The Myth of All-Powerful Central Bankers

It’s easy to understand how alluring this myth is. Quantitative easing (QE) and promises to “do whatever it takes” seem to be all-powerful tools that move markets with mere words from a central banker’s lips.  After all, is not the sole driver behind Japan’s strong stock market the determination of the Bank of Japan to weaken the Yen? Everyone knows that the Fed’s QE policies levitated US asset prices. Surely everyone can see that the European credit and equity markets turned the very day that the Chairman of the European Central Bank, Mario Draghi, famously promised to “do whatever it takes” to heal the Eurozone’s credit woes. This promise has underwritten the continuing rebound in the price of Greek debt shown below. Oh, wait a second... 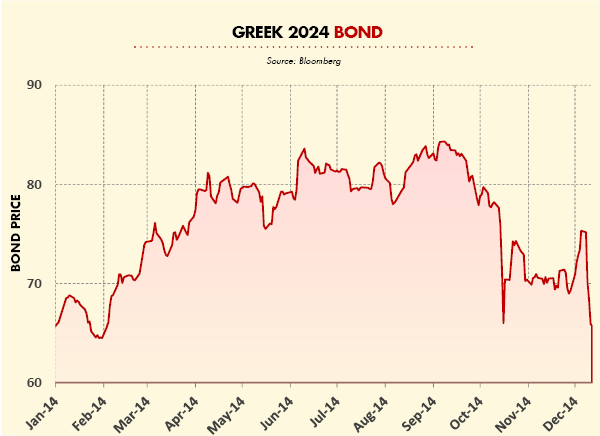 Greece: Where the Narrative Fails?

We have been writing about the Greek bond market since the 21st of May (Big Problems Start Small, 5/21/14) when we noted that political risk was rising again within Greece. The following week we noted that we expected to see further weakness in this, and other credit markets, because we expected an inventory destocking cycle (Making Volatility our Friend: Trading the Kitchin Cycle, 5/28/14) slowdown that would stress the world’s weaker credit markets.  The price of Greek sovereign debt that matures in 2024 is now down nearly 23% since September when the Kitchin inventory cycle that we had been expecting finally turned down. Belatedly, as always it seems, the local stock market clung to its own illusions before crashing 23% last week, experiencing its worst single day since 1987.  Somehow the alluring narrative of the all-powerful central banker is failing in Greece. We would be wise to carefully examine the ground on which this battle is raging.

For months we have been highlighting the dangers of ongoing events in Greece, which have slid from bad to worse to downright scary in the last few days. The cost for Greece to borrow money for three years has nearly doubled from 6% to 11% last week alone. The cost to borrow was 3% just this summer.  Something has broken in Greece. Greece cannot fund itself at interest rates that are this high.  Neither can Greece devalue its currency nor have its central bank print money to solve this problem, at least not so long as Greece remains locked into the failing structure of the Euro. Can Europe somehow muddle through again? Can central bankers once more ride to the rescue? There is much riding on the answer.

Is Greece the Weak Link in the Credit Chain?  If so, a break here will be followed by many others

In May (Big Problems Start Small, 5/21/14) and again in October (Market Raids and Weak Links, 10/22/14) we asked if credit weakness in Greece may precipitate another round of contagion in the global debt markets.  The answer increasingly seems to be “yes.”  Furthermore, we have pointed out the flawed narrative that central bankers are an all-powerful force in the market.  I think the more precise narrative is that central bankers are very powerful as long as sovereign nations allow central bankers to dominate the narrative. Angry Greek voters are threatening to counterattack.  What happens if Greece elects representatives who say “enough!” and re-open the terms of the bailout?  Can the “all powerful” European Central Bank support Greece then?  Will German voters continue to fund the Greek bailout?

The Prime Minister of Greece is locked in a desperate struggle to shore up support for his failing governing coalition.  This coalition is wildly unpopular within Greece because it has presided over the worst economy since the Great Depression and implemented a German-dictated austerity policy.  Unemployment is near 26%.  Fringe parties to the right and left are drawing support from the fading center.  Tired and frustrated voters are fed up.  We have been highlighting the risks that austerity fatigue creates in Europe since June (Ghosts of Invergordon, 6/4/14).  If the Greek Prime Minister fails to secure his coalition, Greece will face the political uncertainty of a snap election.  In the lead at the polls is the radical party Syrzia.  It is threatening to tear up the terms of the German-dictated austerity policy that earned Greece its $297 billion bailout.  Greece has until December 17 to assemble the necessary 200 seat coalition yet only has 155 seats right now.  Successive votes December 23 and 29 have a lower hurdle to form a government and will be necessary if the government fails to secure a super-majority earlier.  I doubt the markets will take this uncertainty well.

Failure at this final date will require snap elections in January or February where Syrzia is the likely winner.  Greek banks are highly dependent on low-cost funding from the European Central Bank (ECB).  The ECB needs the cover of a repentant Greek government to placate Germany’s angry voters and keep the bailout going.  It’s hard to see how Greek banks would avoid insolvency should they have to fund themselves at the now-skyrocketing cost of borrowing within Greece.  Banking counterparties outside of Greece may recoil from all this uncertainty, cut lending, and increase the cost of borrowing as credit weakness spreads to more countries in Europe as the flawed narrative fails.  This is serious indeed.

One of the truisms in investing is “That which everybody knows seldom is worth knowing.”  Is the myth of the “all-powerful central banker” yet another example of this truth in action?  That would be a highly unanticipated shock to most market participants.  But with a little forethought, we need not number among the deceived.  Rather we should learn from the master, from Napoleon, who charged his own generals when he first studied Austerlitz: “Gentlemen, examine this ground carefully, it is going to be a battlefield.  You will have a part to play upon it.”  Greece is shaping up to be a credit battlefield.  We would be wise to study it.•