“As you get older it is harder to have heroes, but it is sort of necessary.”

When it comes to heroes in the investing business, you have to be very careful.  History is filled with cautionary tales of investors who had great runs only to severely disappoint later.  All too often, the cold, harsh light of retrospection illuminates the secret that we feared and yet somehow always knew that we would find: their stellar performance was a function of their bias.  They were in the right place at the right time.  It was only luck, not skill, which allowed them to harvest the temporary fruit of a freakishly bountiful harvest.  When the cycle turned to which they were unwittingly leveraged - boom turned to bust with startling speed.  Unique indeed are those investors who can prosper in both the day of plenty as well as the day of want.  Richard Cantillon was just such an investor.

Richard Cantillon was an Irishman whose respected treatise, “An Essay on Economic Theory,” was first published posthumously in 1755.  His work was one of the few cited in Adam Smith’s “Wealth of Nations” published two decades later.  Famed economist Joseph Schumpeter described Cantillon’s essay as, “The first systematic penetration of the field of economics.”  Cantillon spoke many languages and was friends with Montesquieu and Voltaire. 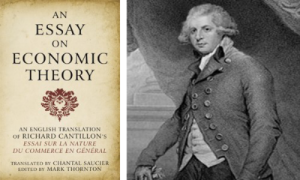 Cantillon was much more than an author and path-breaking economist - he was a brilliant investor too.  Three things make Cantillon worthy of respect even after the passage of three centuries.  First, Cantillon was no fair weather investor.  He made two fortunes, one in a rising market and then another when the market fell!  Second, he did so during the most extreme volatility in the history of financial markets, the legendary global financial bubble of 1719-1720.  Third, the markets in which he traded were state-sponsored bubbles inspired by the financial innovations of John Law, the father of central banking.  The parallels between Cantillon's times and our own are not altogether comforting.  Today’s “Trends and Tail Risks” studies Richard Cantillon to find a profitable way forward through markets that are now so highly influenced by Law’s hyper-active progeny.

The World of Richard Cantillon

King Louis XIV had recently passed away.  His regime had wrecked the French economy with slow growth and too much debt.  Investment stagnated and unemployment was high because confidence in the moribund French economy was lacking.  John Law, a Scottish adventurer, gambler and convicted murderer, got the ear of the new young king’s Regent and protector (Philippe d’Orleans) with a bold idea.  Law believed that much of the strength of France was lying unused and that the innovation of paper money, backed not by gold but by credit, could re-invigorate France.  The Regent agreed and launched Law’s reforms.  The plan’s initial, amazing success made John Law famous.  Law was lauded as an economic genius for creating an economic miracle within France in what came to be known as the Mississippi Bubble.  His success spawned similar reforms in England and the Netherlands.  Historic bull markets would follow in their wake - as would epic crashes.

Cantillon was an early investor in the Mississippi Company.  However, Cantillon’s deep-set suspicion of Law’s system led him to cash in his winnings too soon.  Leery of the ultimate collapse of Law’s system, Cantillon left France in the weeks before the peak.  He took his knowledge to England to catch the nascent huge bull market in the South Sea Company, the copycat version of Law’s innovation.  Cantillon anticipated the early success, and ultimate failure, of the English bubble company the South Sea Company (see chart below).  His aggressive investment in its early days enlarged the fortune he had just earned from the Mississippi Company.  Once again, he sold too soon. The South Sea Company shares tripled again after he sold them.  This last blow-off in the shares of South Sea proved an irresistible temptation to Sir Isaac Newton, who re-entered the stock and subsequently lost a fortune (Sir Isaac Newton: Visionary Scientist, Lousy Investor, 08/27/14).  Finally, Cantillon repeated his earlier successes with an early entry (and exit) in the Dutch version of the global bubble of 1720 then underway, the West and East India companies. 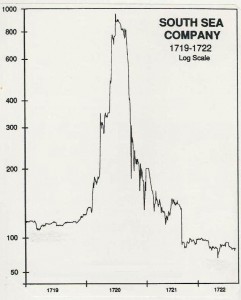 What are the chief lessons we learn from Cantillon?  First and foremost, Cantillon chose his bets wisely. He deeply understood the causal forces driving the cycle. With his investments in the Mississippi Company, he established the precedent of buying early and selling early.  Cantillon sold his investment in the Mississippi Company at 2500 even though it would rally a further four-fold to 10,000 in just another four months.  He raised cash and remained extremely liquid while the stock subsequently lost all its value.   He counseled his clients to exit the English bubble company, the South Sea Company, at 350 only to see it rise to 1000 in just the next four weeks.  One can only imagine the grief he endured from his friends and clients during this time!  Within weeks his longer term view would be vindicated as the shares crashed.  He understood that it was only a constant stream of newly available credit that kept the market levitating, and he feared the day that confidence would break.

Cantillon also teaches us the paramount importance of trade structure.  Trade structure is a fancy word for how Cantillon chose the best investment vehicle to most precisely express his investment views. Cantillon bought puts on the South Sea Company when it became time for the cycle to turn and a more bearish bet was necessary. These puts gave him the right but not the obligation to sell the stock at a specific price on or before a specific date.   It was a brilliant trade structure because it offered a very asymmetric return profile.  The contract had a payout structure that would result in a limited loss if Cantillon was wrong, but a hugely outsized gain if he was correct. And he was very correct!  This structure was also preferable to simply shorting this bubble stock, since shorting presents the disadvantage of a rising liability if Cantillon’s insights were premature.  The trade structure he chose worked out strongly to his advantage by allowing him to be early in his insight yet still ultimately profit hugely in the end.

What was the source of Cantillon’s insight that allowed him to profit in both rising and falling markets?  Cantillon understood the chief flaw in Law’s system.  Law could not simultaneously peg the value of the Mississippi Company’s stock at a fixed price (9,000 Livres) while also maintaining a fixed value for the French currency, the Livre.   The French currency was therefore vulnerable.  Cantillon structured loans in stronger English Sterling to speculators who were keen to borrow to invest in the French Mississippi Company.  He wisely demanded over-collateralization for these loans.  As the summer of 1720 progressed, confidence in Law’s scheme shattered.  As the Mississippi Company stock fell so did the value of the French currency, which fell from one Livre equaling around 1/35 of a Pound in May, to one Livre equaling 1/100 of a Pound by September 1720.  By late 1720 the French Livre literally went "no bid" in London, meaning there were no buyers at any price for the French currency during this tumultuous time.

Cantillon understood the problems of Law’s system far better than Law himself did.  Law had threatened Cantillon with imprisonment when Law first learned of Cantillon’s critiques of his system.  As the end approached for Law, he repeatedly tried to get Cantillon to come to Paris to help him prop up his failing system, an invitation that Cantillon repeatedly and shrewdly declined.  Cantillon did not want to be associated with its collapse, which he believed to be inevitable.

Cantillon’s record was certainly not perfect.  He sold too early, repeatedly.  His insights were often early.  Sometimes even his most thoughtful trade structures gave him fits.  For instance his loans to rich speculators in the stock market bubble cost him many sleepless nights.  He also worried about the strength of his counterparties, particularly Pierre Huguetan who had so unwisely sold the South Sea put option to Cantillon.

The irrational exuberance that enveloped the investing world during this time is the stuff of legend.  Three hundred years later students of the markets still study this series of bubbles.  Even the art world was impacted by it.  Below is just one image of the frenzied speculation in London satirized by Hogarth. 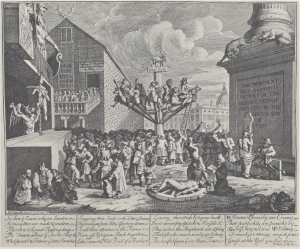 In the study of Richard Cantillon, we can find inspiration that there is always a profitable path forward in any kind of market.  In some instances, we may discover this path through a better understanding of the course of markets or the impact of central bank policies upon them. We must then carefully select the right trade structure with which to express our view of future developments.  Even those steps, quite frankly, are still not enough to guarantee success.  We must also have strong counterparties to ensure that the profits earned by our insights are indeed made good.  Cantillon’s achievement inspires us to find success in any market, up or down.  For his example, and for the lessons he teaches us, we owe a debt of gratitude to Richard Cantillon: author, economist, and investor. •