Investing is about anticipating and profiting from change.  But change can be hard to spot.  Often the biggest changes are the ones that are the hardest to see.  Of course, it is these huge unexpected trends that are the most profitable ones in which to invest.  Over my career I have learned that sometimes the best way to spot these trends is to take a step back and ask the big questions, look at the big maps.  When I do so four big trends are apparent:

These could be seen as problems that threaten some companies.  While shorting problems - betting against the companies that suffer from them - can be profitable to trade, the greatest upside comes from investing in long-term solutions.  After all, society progresses through solutions!

It has been my experience that when seemingly disparate trends unite behind a single innovation or change, incredible multi-year investment returns can follow.  It’s a rare occurrence to be sure, but one for which we are constantly on the lookout.  Could one argue that in robotics these four trends combine?  If past is prologue, the answer may be “yes.”  In this week’s “Trends and Tail Risks” we take a step back to study James Watt, who in the 1760s through the 1780s perfected the Newcomen steam engine, and in doing so kicked started the Industrial Revolution. 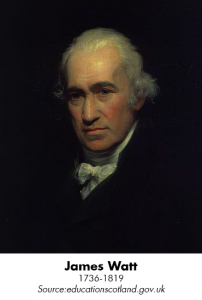 The incredible impact of the Industrial Revolution on the progress of human civilization is rivaled only by the discovery of fire and agriculture.  No one has a greater claim to the title of the Father of the Industrial Revolution than James Watt, a homeschooled mechanical prodigy.  Even the very power we consume today is measured in units named in his honor: the watt.

Watt, a Scotsman, was a contemporary and friend of Adam Smith.  Smith taught at the University of Glasgow in the 1750s and helped Watt land his first job there.  Watt had grown up hard with the early death of his mother and illness of his father when James was only eighteen.  Watt, despite only limited training, had proven himself as a gifted mechanical engineer.  One of the subjects to which he turned his attention was the Newcomen steam engine, the first steam powered machine used to pump water from flooded English mines.  Watt perceived an important flaw in Newcomen’s design: only one of the two strokes of the piston per cycle was creating mechanical force.  Watt’s new design enabled both cycles to be power strokes.  Such improvements would eventually raise the efficiency of his steam engine by five-fold.  As the operating costs of Watt’s steam engine fell, its addressable market rose far beyond simply pumping water from mines. 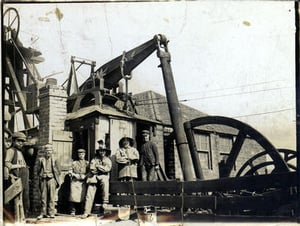 Watt knew he was on to something big.  Still, he needed capital to grow the business and provide a steady source of income while he did so.  There was nothing inevitable about his success.  Indeed, one of his initial backers went bankrupt.  Watt struggled to find metalworking capacity that could finely calibrate parts to the tolerances he needed.  The technology necessary to do so did not exist among most blacksmiths of the day.  He sought solutions to this problem and found them. Progress in his steam engine drove improvements in metalworking, which also made other innovations possible.  The self-reinforcing productivity miracle was underway!

Watt had excellent business sense and forged an innovative business model to profit from his invention.  He licensed out the manufacturing of his engine to others and charged a royalty representing one-third of the annual cost savings realized by his customers using his steam engine relative to the cost of existing Newcomen engines.  Watt would be involved in extensive patent litigation and help create many precedents in intellectual property.  Innovation built upon innovation and Watt’s steam engine would enter new markets with the first such wave in milling, yarn spinning, and grinding.  Later breakthroughs would include transportation and drive down the cost of seaborne and land transportation. This opened up whole new export markets for entirely new regions of the world.  His improvements to the steam engine literally changed the world.

We have written exhaustively about global debt levels that are too high (The Debt Hurricane, 1/14/15). The burden of overindebtedness, and the slowing real growth that accompanies it, is the force driving interest rates to the lowest level in a thousand years (Negative Interest Rates?, 2/4/15).  This is complicating the lives of bond investors to be sure – but does it not also lower the per unit cost of capital for companies to invest in innovative and cost-saving robotic technologies?  At the same time mandates from the U.S. government are increasing the per unit cost for businesses to retain traditional human employees, especially through rising health insurance costs.  Might labor-saving robotics and automation take share away from employees in certain applications?

Markets always respond to incentives.  This truism drives our strategy to anticipate and invest in that which is inevitable.  The incentive to substitute cheap capital for more expensive labor is surely strong and growing.  Has technological innovation progressed to the point where companies can profitably exploit this opportunity?  Can innovation build upon innovation and create new solutions to problems that may threaten to slow this trend?  Which companies, or suppliers, are the best positioned for the future?  Companies that can answer these questions affirmatively should be rewarded by the market.  The market always puts a premium on solutions!  Watt's experience is an excellent example of history's most disruptive technology in action.

For instance, the contributions of James Watt would dramatically accelerate England’s productivity growth. This faster growth enabled England to pay down its exorbitant debts from the expensive American Revolution and Napoleonic Wars, providing history with a rare example of a country deleveraging through higher real growth.

Robotics may sound like the stuff of science fiction movies but the applications are as real as the companies that are investing in them.  More than two years ago Amazon bought KIVA Systems to automate its warehouses, to “pick, pack and stow,” as the company described it.  The sheer size, growth, and complexity of Amazon’s ordering and shipping needs are driving the need for a solution.  Amazon believes that in robotics it has found the answer.  Google, another forward-looking company, purchased eight robotics companies in 2013 but has been working on driverless cars for many years, which the company believes will be available to the public by 2017.  These early technology adopters are substituting lower cost robotics for higher cost human labor as well as exploring robots as a new technology platform similar to a computer or cellphone.  Might this be the start of a new trend?  What are the bottlenecks for which solutions must be found?  The market will richly reward those who can answer these important questions.

One of the things that appeals the most to me about the robotics sector is that there are only a handful of publicly traded companies scattered about the globe. Remember: big trends start small!   Are we in the early days of a robotics cycle?  It’s no exaggeration to say that a fortune could be riding on the answer.  As always we will seek to invest in opportunities benefiting from powerful secular trends without ever losing sight of our valuation discipline.•

“I wonder whether any other generation has seen such astounding revolutions of data and values as those through which we have lived.  Scarcely anything material or established which I was brought up to believe was permanent and vital, has lasted.  Everything I was sure or taught to be sure was impossible, has happened.”
-Winston Churchill

“It is a commonplace of modern technology that there is a high measure of certainty that problems have solutions before there is knowledge of how they are to be solved.”
-John Kenneth Galbraith

“It’s not what you look at that matters, it’s what you see.”
-Thoreau

“The world is poised on the cusp of an economic and cultural shift as dramatic as that of the Industrial Revolution.”
-Steven Levy