"How did you go bankrupt?" Bill asked.

I have always been fascinated by the weather.  Where does it come from?  How does it change so quickly?  What drives the extremes about which we read so often?  “Tragic Tornado Disaster” in the Midwest, “Punishing Blizzard” up North, but nothing is more feared – or more damaging – than a hurricane.  A hurricane’s power is amazing.  The National Hurricane Center estimates that an average hurricane releases 600 trillion (trillion with a T) watts of energy, more than enough energy to power the world 100 times over.  Every second of its life a hurricane releases as much energy as the first atomic bomb dropped on Hiroshima.  A hurricane will release over its life more energy than is contained in the combined nuclear arsenals of both Russia and the United Sates.

So it’s little wonder that reasonable people in the Hurricane Belt, especially here in our own sunny Naples, spend incredible amounts of money to fortify their houses with hurricane strength glass, doors, roofs, even garages.  Homeowners also spend equally impressive amounts on homeowners insurance against wind and water damage from these storms.  But to update what the chart below displays, with the quiet end to the 2014 hurricane season, we have now reached a record ten years without a major hurricane striking land in the U.S., longer than any other time all the way back to 1900.  After such a long stretch, can we confidently declare that hurricanes are gone for good?  Can we stop spending all this time and money preparing for a disaster that has, for the last decade, remained a no-show?  Sadly, we all know the answer is “No.”  It’s only a matter of time before hurricanes return. 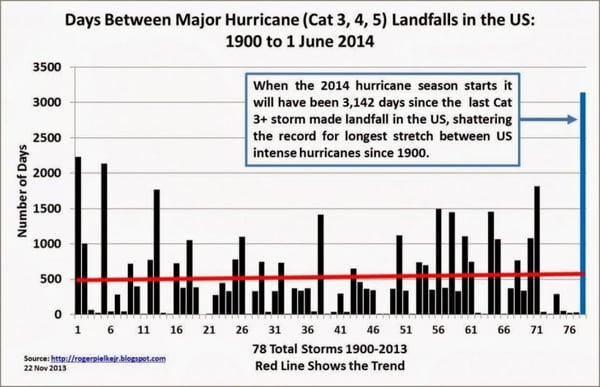 Credit crises like the one that we experienced in 2008 are the financial equivalent of a hurricane.  They are rare but catastrophic events, threatening everything in their path with destruction.  We can learn much about the rare ferocity of a credit crisis by studying history’s greatest hurricanes.  In this week’s “Trends and Tail Risks,” we examine the great Galveston Hurricane of 1900, the deadliest natural disaster our country ever suffered.

Locals had remained before in Galveston and ridden through many a fierce storm.  Why should this time be any different?  This storm was different, a rare and deadly Category 4 hurricane.  The eye of the hurricane struck Galveston on the evening of Saturday, September 8, 1900.  Eight thousand souls would perish by the time the sun rose on Sunday.  The city was completely wrecked (see picture below).  One out of five citizens died.  Nearly everyone who survived was homeless.  Galveston was a wasteland.

The highest point on Galveston at that time was less than nine feet above sea level.  The hurricane’s storm surge was a deadly fifteen foot high wall of water lashing out in the night.  It rolled across the island, smashing homes into matchsticks.  Chastened by this catastrophic loss, the city of Galveston undertook a massive hurricane remediation effort.  They raised the level of the town by seventeen feet.  Galveston also built a seventeen foot high sea wall to ward off the ocean.  Galveston would be hit again by fierce storms, but never again would it suffer such a crippling blow.

Several things conspired to make this hurricane the worst natural disaster in U.S. history.  First, very few people heeded the hurricane warning and were thus trapped when the disaster struck.  Second, the low-lying town was very vulnerable to a storm surge.  Third and finally, the shallow water off the coast in front of Galveston amplified the power of the storm surge, since the water had nowhere else to go and could only rise. 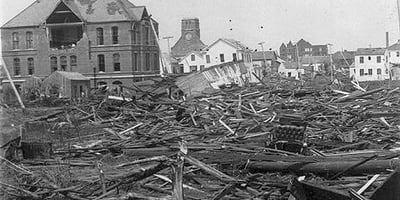 Few homeowners in the Hurricane Belt would leave their homes unprepared and uninsured even after almost a full decade without a hurricane.  The financial markets, however, all too often seem to be filled with participants who would gladly view this “hurricane free” data as evidence of a “new era” of permanent hurricane-free prosperity.   But is it really?  No doubt these eager commentators would credit the activist policies of the world’s central banks as the force behind our new-found “post-hurricane age” of endless prosperity, engineered by the wise and powerful mandarins at the central bank.  Homeowners year in and year out nonetheless continue to upgrade their homes in an attempt to withstand hurricanes and pay their insurance on time.  They do so not in the hope that their homes may be blown down or washed away, thereby justifying their time and expense – but in the fear that they might.  Just as rational homeowners take thoughtful steps to protect themselves from rare but catastrophic disasters, so should rational investors.

Debt is very important to our economy, as the chart below displays.  When debts are rising relative to GDP (blue line), debt growth is adding to GDP growth.  By going into debt now, we “pull forward” into the present demand that could otherwise only take place in the future.  This is why the world’s central bankers are so fixated upon lowering interest rates whenever growth slows.  This is also why central banks have embarked upon “quantitative easing” to force total debts to grow by substituting rising government debts for shrinking private debts.  Their goal is to “stimulate” the economy by getting interest rates down in the hopes that we will, once again, mortgage our future and borrow more now in order to finance consumption today.  Does this not mean that at some point in the future, when debts can no longer grow faster than the economy that we will pay for all the future demand that we stole from ourselves?  This is exactly what happened during the Great Depression when confidence broke, kicking off a sustained cycle of debt reduction that deleveraged the economy.  Scared consumers repaid existing debts aggressively, deferring potential consumption from the present forward into the future in the form of a rising savings rate. 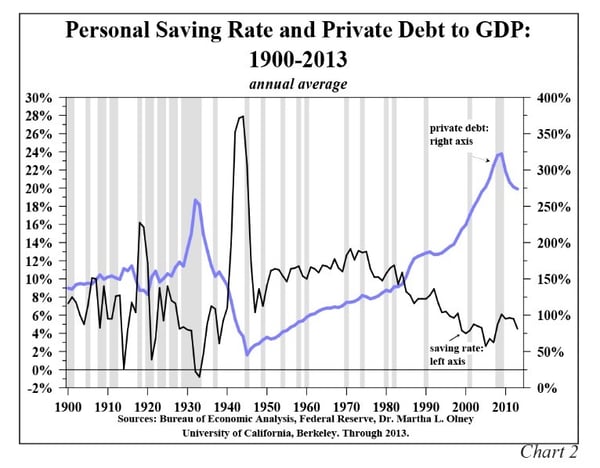 Surely I cannot be the only one amazed at the shortsightedness of what passes for “central bank policy!”  Future observers when they look back on our times will only be able to shake their heads in wonder at the lack of vision of our leaders.  I freely admit that rising debts in the short term are an “economic stimulus” to the economy.   But what more is it?  And at what cost?  Can debts, especially debts relative to the size of the economy, grow forever?

Our debt/GDP levels are already near the highest ever.  As long as debts are rising, the party continues.  The debt driven party is already drawing to a close in many highly indebted emerging markets.  In the short run, we benefit from their problems as capital flees their shores for the safer haven of the stronger U.S. economy.  But can even a country as strong as the U.S. grow debt endlessly without weakening the overall quality of that debt?  At what point does the additional weight of the debt change a “welcome stimulus” into a troublesome burden?  Perhaps we are already starting to see the very first small signs of such a change in the continued strength of high quality, long duration bonds and a quiet bottoming in the relative value of gold? (Gold: Price vs. Relative Value, 7/23/14, Gold: Lessons from the Depression, 8/20/14, Credit: Caught Leaning, 8/13/14, Our Bond Strategy: The Power of Duration, 10/8/14). These are investments that we have already made in preparation for this day.

We worry about what happens when debt cannot grow faster than the economy.  When will that be?  It’s very hard to say.  What we can say, however, is that we are firm believers in Stein’s Law: that which cannot go on forever, will stop.  This is why we study the credit markets.  To get insight into the question of “when.”  This is why we think that hurricanes can teach us a lot about how to plan ahead for the day that this cycle turns and the debt hurricane returns.  We believe that if we study these signs, with a little forethought, we may avoid the rare but catastrophic damage wrought by the hurricane of a credit crisis.

We can prepare in advance for the inevitable credit storm just as we do for the coming of a hurricane.  We build a strong portfolio on a solid foundation.  Most importantly, we keep a wary eye on the credit markets.  This is the equivalent of watching the waters off of the West African coast from May until November, looking for the first small telltale signs of the emergence of a storm.  By doing so, you might see a few storms that will fail to become hurricanes, but you won’t be surprised by the Big One when it arrives.•