Pay Attention to What "Shouldn't" be Happening

I have learned a number of important lessons in my investing career.  One of the most important lessons was to pay close attention to events in the market that did not seem to make sense.  Oftentimes these seemingly nonsensical developments are the most important to understand, because they are often the leading edge of unexpected change, which is why they appear to be so unusual to us when these events occur.

Consensus opinion is that Europe’s “Quantitative Easing” now underway has driven interest rates there negative – but could there be a different driver?  If so, what mistakes might investors be making right now?  In this week’s “Trends and Tail Risks,” we study negative interest rates to ask what they mean for the health of the U.S. bond and stock markets.

Why Would any Investor Accept what Appears to be a Guaranteed Loss on their Money?  What are Investors Really Afraid of in Order for them to Accept Negative Returns?

Renewed credit stress in Greece impacted many other markets around the globe.  Arguably the weakness in the Euro and strength in the dollar reflected similar capital flows out of Europe and into the safer haven of the U.S., where bond yields - while low - are at least still positive!

Many commentators have argued that bond yields are falling in Europe due to the recent quantitative easing (QE) by the European Central Bank.  Perhaps they are right.  However, if so this would mark a completely different market response to QE from that in the U.S. market.  In the U.S. market, QE announcements were almost invariably associated with a sell-off in the prices of U.S. government debt and rising government bond yields because QE was seen to be pro-growth or “reflationary” (Quantitative Easing: Perception vs. Reality, 7/30/14).  Why would the same QE medicine have such a different impact in Europe than in the U.S.?

What other logical reasons could there be to willingly accept negative returns?  Could growing fears about capital controls and bank solvency in Europe be another force driving interest rates negative?  Europe was the first to implement capital controls and “bail ins” of bank depositors upon the failure of Cyprus’ banks.   In March of 2013, for the first time since the financial crisis began in 2008, EU authorities in Cyprus changed tactics from guaranteeing bank deposits and safeguarding bank creditors to actually seizing bank deposits to recapitalize failed banks.  More than two years have passed since the Cyprus “bail ins” but do perhaps similar fears of “bail ins” or capital controls still remain about Greece?

Regardless of the driver of negative interest rates, they remain a stark reminder that the world is still dealing with the strange aftereffects of the global financial crisis.  The prevailing policy trend remains to further empower central banks with more and more power to intervene “unconventionally” in the global economy and financial markets.  In every prior cycle central bankers have been able to lower interest rates during a slowdown to help incentivize lending.  Will today’s negative interest rates call for increasingly "unconventional" central bank policies during the next downturn?

Is the Real Driver of Negative Interest Rates NOT QE but Rather Fears About Greece and/or Falling Growth Expectations?

Negative interest rates really first appeared in Europe in mid-2012 as the European Sovereign Debt Crisis reached its peak – long before any Quantitative Easing (QE) was discussed in Europe.  Distress among the weaker European sovereign borrowers, such as Portugal, Greece, Italy and Spain drove capital flight into the bonds of stronger borrowers, such as Germany and Switzerland.  As capital flight into German and Swiss bonds accelerated, the prices of these bonds rose and their yields fell as investors willingly accepted smaller and smaller yields in an attempt to find safety.  Certainly there is nothing new about a flight to quality in times of credit stress.  The novelty here is the intensity of this flight to quality.  Yields of the strongest borrowers did not stop at zero but in fact went negative!  German government three year obligations flirted with slightly negative yields but never remained negative for long – or became very negative.  Swiss government three year bond yields showed a similar pattern, although with yields that were lower still.

The May 2014 European Parliamentary elections in Greece became a de facto referendum on the austerity policies to which Greece’s politicians had agreed in exchange for its 2012 bailout (Big Problems Start Small, 5/21/14).  A strong showing for the opposition in this election suggested to investors that Greece’s problems were not wholly fixed, as so many had wrongly assumed.   Greece’s politicians gambled on an early election which resulted in the defeat of the existing political parties and the rise to power of Syriza, an alliance of radical leftist parties.

The more the market came to worry about Greek politics, the higher the yields of Greek debts rose as investors demanded more and more compensation for the rising political risks in Greece.  These troubling debt dynamics sprang solely from growing political uncertainty within Greece.  Creditors were increasingly concerned that their debtors may not honor the full value of their debts.  These developments drove capital flight which is now showing up in the form of a weaker Euro, a stronger dollar, and strong bond prices of more creditworthy sovereign borrowers.

Below is a chart showing the yields of Greek sovereign debt of ten year and three year duration.  Mid-October shows a clear inflection point when Greek three year yields began to rise faster than ten year yields.  By late December the Greek yield curve had “inverted,” with the yield on shorter term three year bonds greater than that of ten year bonds.  An inverted yield curve is one of the market’s darkest omens of coming economic weakness.  The inverted yield curve would prove its forecasting merit once more as the Greek stock market would accelerate to the downside in coming weeks.  Yields on Greek government debt rose higher and higher. 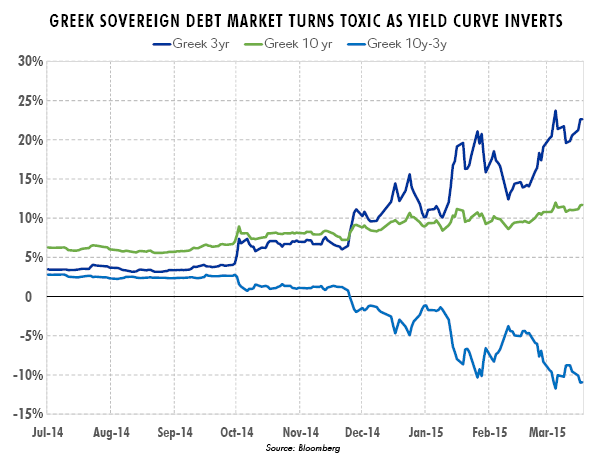 A failing Greek debt market also cast its shadow across the stronger European sovereign debt markets of Germany and Switzerland, where interest rates turned negative again and remain so to this day.  Swiss three year yields would become almost four times as negative in 2014 as their worst level in 2012.  Swiss government three year yields remain negative today at -.74%.  Swiss yields are negative out to ten years.  German three year sovereign bond yields are - .22% today and are negative out to seven years.

Has Credit Stress in the U.S. Peaked for now?  Or Will the Recent Trend of Worsening Credit Continue?  Much is Riding on the Answer to this Question.

The chart below illustrates the yield premium in percent that the market charges to investment grade borrowers (BAA rated) above the rate paid by the U.S. government on debt with a comparable maturity.  This premium can be a handy way to gauge the market’s appetite for credit risk.  When the premium is rising the market is growing ever more concerned about credit quality.  The most disturbing part of this chart is that now for only the third time in the last eighteen years this premium is over a rising two hundred week moving average line, which is a short-hand method many investors use to identify trend changes.

My research on the inventory cycle anticipated last fall’s credit weakness (Is Credit Quality Peaking?, 8/6/14) but also suggested that credit stress could be temporary and abate once the inventory cycle had spent its force.  This is why it is so important to monitor the indicator above for the direction of credit spreads.  Continued weakness in credit would suggest that the fundamentals behind the credit markets are not as strong as one would otherwise expect.  The credit markets, which are far larger than the more well-known and more liquid equity markets, very often will reflect a fundamental change before the equity market does.  This is why our analytical team devotes so much time to monitoring the credit markets (What Does the Bond Market Know?, 5/7/14) in order to seek an early warning of upcoming equity market weakness.

It’s reasonable to expect that a successful conclusion to the ongoing debt discussions between Greece and its lenders would stem the growing tide toward negative interest rates in Europe.  By going to the source of the credit risk – Greece – we can gain insight into the health of the European and the U.S. credit markets and therefore – with a lag - the equity market as well.  The trend of these credit spreads will be very telling about which path the market may choose: healing credit and buoyant equity markets or rising credit distress and weaker equities.  Other key indicators to monitor include the relative value of gold (Gold: Price vs. Relative Value, 7/23/14) and the price of credit default swaps that bond investors can purchase to insure against default.   For now these measures remain quiescent but should be monitored carefully.  The credit markets remain the most sensitive of all financial markets – it is to them that we must listen! •

“It isn’t what we don’t know that gives us trouble, it’s what we know that ain’t so!”
-Will Rogers

“By three methods we may learn wisdom: First, by reflection, which is noblest; Second, by imitation, which is easiest; and third by experience, which is the bitterest."
-Confucius

“All great events hang by a single thread. The clever man takes advantage of everything, neglects nothing that may give him some added opportunity; the less clever man, by neglecting one thing, sometimes misses everything.”
-Napoleon