Asking better questions is the fastest way to make more money in the markets. In today’s “Trends and Tail Risks,” I will take a step back and explain the backstory of how asking better questions drew me to study gold and to understand its usefulness in better understanding other markets as well. Gold is supporting our bullishness on higher-quality, longer dated bonds. Through it all, asking the right questions is always the path to the best investment outcomes.

Learning How to Make Money in the Markets: Studying Companies

After earning my MBA at Wharton, I joined T. Rowe Price as an equity analyst. There I finally could study and educate myself about sustainable growth companies such as 3M, Ecolab, Monsanto and other American icons that have ground out solid returns for generations.  My studies taught me what makes a great company truly great.  However, once I moved on to analyze a new company, I started at zero, leaving my knowledge base behind.  I wanted to make a bigger contribution and more quickly scale my impact on our investors’ success.

As my research coverage grew, my study expanded beyond these sustainable growth companies to include companies whose earnings were not as durable, but rather moved up and down with the business cycle.  These stocks could be amazing investments even though they were more volatile, lower quality businesses - if you were able to buy them right and sell them right.  To do so, one had to understand both the individual company and the cycle.  It was a different kind of investing but one I eagerly embraced in my quest to be a more complete investor.

My journey into cyclicals began with commodity chemical companies, such as Dow Chemical and DuPont.  Their earnings rose dramatically when demand was booming and producers were unable to increase supply fast enough to meet demand.  Supply you could forecast, since new production facilities took years and billions of dollars to build.  Forecasting demand was much harder.  And that is not where investors’ difficulties in cyclicals ended.

Cyclical stocks are very forward looking.  They anticipate results, sometimes by years.  In fact, these stocks will often begin rallying when things can’t get any worse.  This kind of investing was clearly more of an art form than a science.  But I had never seen a cycle, much less traded one.  How could I possibly add value in cyclical investments, especially when billions of dollars were on the line?  I did what I always did: I set about educating myself.

The better my questions, the faster I learned, and my insights had more impact.  I remember one of the foundational questions I asked: why are so many cycles correlated?  For instance, ethylene, a commodity chemical, shared its peaks and troughs with corn.  What could these commodities possibly have in common?  Could I find a way for my knowledge of one industry to improve my investing in another?  I was thrilled at the prospect and dove into those questions.

The first thing I did was order the bible of commodity fundamentals, the Commodity Research Bureau’s (CRB) “Handbook.”  From aluminum to zinc, and everything in between.  What is the trend of U.S. corn exports?  It’s in the book.  Curious about the supply and demand balance of Peruvian fishmeal in 1976?  It’s in there.  A chart of the Great Pepper Bull market of 1948/1949?  Also there.  I remember spending my Thanksgiving weekend in 2002 reading the Handbook from cover to cover.

Prices for commodities were down substantially since the late 1970's. Not just some of them.  All of them. Some fell 70% or more. I saw a huge opportunity unfolding right in front of my eyes.  I kept wondering, what simple truth explained all these moves in so many different markets?  There had to be something deeper at work.

To the contrarian, the Handbook’s hundreds of down-sloping charts told an amazing tale of woe.  Of capital destroyed, of hope thwarted, of careers broken.  In a word: opportunity!  But you couldn’t tell that to most of the analysts who had wasted the best years of their lives covering an industry that only went down, about which nobody really cared anymore.  Here was an opportunity for someone with a fresh perspective, who could focus on where it was going not on where it had been.

Commodities Suggest There is More to Gold Than Meets the Eye

Any thoughtful observer who read the entire “Handbook” with an open mind, as I did, could see that there had never been a sustained move in this mass of hundreds of commodities that was not presaged by a move in gold.  Gold was the tide on which floated all these commodities, each with its own idiosyncrasies.  That one insight was a key driver to the success I would come to have investing across many commodity industries, such as iron ore, steel, potash, and gold.  Few were looking where I was, and almost none of those looked at the whole.  But one had to ask the right question.  I touched upon the importance of gold to commodities last year in “The Message of Gold” March 2016.

I made it my task to study gold, confident that solving its riddle would also help reveal the deeper truths of commodities and of cycles.  Fifteen years later I am still hard at work, but that work has not gone unrewarded.

Not Your Father’s Gold Market

Only grudgingly does gold yield its insights.  One I was able to wrest from it was gold’s usefulness in analyzing other markets.  The chart below is an excellent example.  It displays the ratio of gold prices to the price of the equal weighted CRB Commodity Index on one axis and the price of the TLT exchange traded fund (TLT), which tracks the price of long-dated U.S. government treasury bonds.  You can see the dramatic similarity between this ratio and the TLT. The market is saying that they are basically the same thing.  I agree. 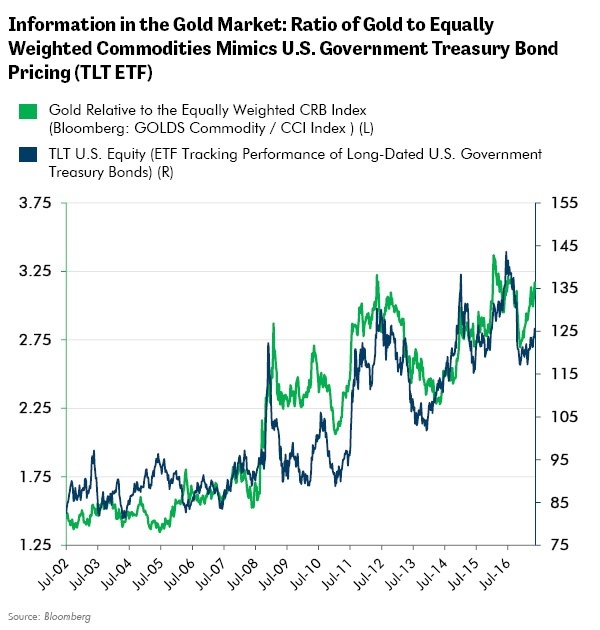 The CRB is basically the Dow Jones Industrial Average of commodities.  This gold/CRB ratio closely mimics the price of the longest-dated U.S. government treasury bonds for an important reason.  Gold appreciates in relative value versus commodities, and many other assets, in times of deflation - periods of slow growth and rising credit stress. 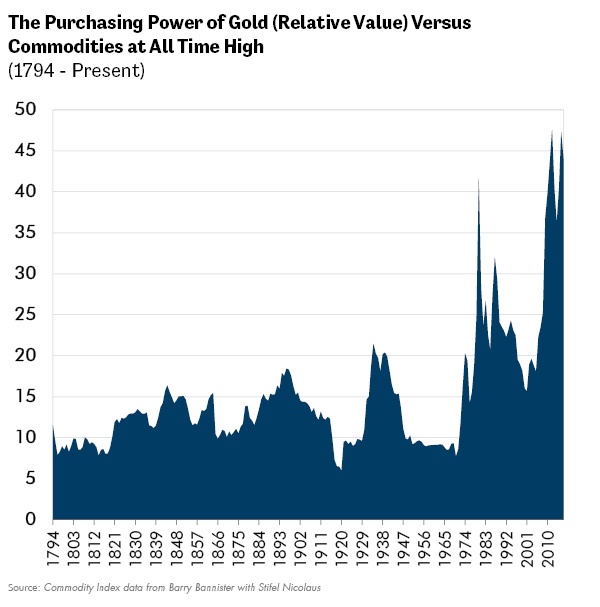 There should be little mystery behind gold’s behavior.  In times of oversupply, of sustained demand weakness, commodity producers desperate for cash flow may sell below the marginal costs of production.  Gold suffers far less than any other commodity from such cyclical pressures because annual gold production is less than 2% of the total available supply of gold.  So gold’s fundamentals can change only slowly.  Gold doesn’t change.  It’s the environment that changes around gold.  Furthermore, gold’s outperformance during depressions remains true - regardless of whether a country’s currency is pegged to gold “officially” or not.  It makes no difference.  Think about that.  That is amazing.

My mantra on this is worth repeating: the world’s governments may have left the gold standard, but the market never did.  For hundreds of years the market has been enforcing the discipline of the gold standard.  Many observers don’t understand that, because they never asked the question of what commodity prices look like in gold terms (relative to gold).

So, the prevailing conditions in such times of the strongest deflation - when risk free interest rates are the lowest - are weak growth, low or falling inflation, and commodity oversupply - kind of like now.  Gold’s relative value during these times should be at the highs, which means that higher-quality, longer-dated bond prices should be high, and interest rates should be low.  And they are!

Bond bears note that interest rates are at multi-century lows.  They are right.  But bond bears are fighting against hundreds of years of history of gold’s relative value.

Gold’s relative value is an important signal that interest rates should be low.  I believe that these are all symptoms of an overindebted world, and that more struggles with debt await us in the future.

We intend to use every tool in our toolbox, including gold’s relative value, to profit from insights that others overlook.  We believe our study of gold gives us an advantage in these markets.  We have this advantage now because years ago we asked better questions.  Our research team’s promise to our clients is that we will keep asking questions. •

“We shall not cease from exploration
And at the end of all our exploring
Will be to arrive where we started
And know the place for the first time.”
- T. S. Eliot

“The difficulty lies not so much in developing new ideas as in escaping from old ones.”
- John Maynard Keynes

“Now we are paying for a lengthy peace.  More deadly than armies, luxury has fallen upon us, avenging the world we conquered.”
- Juvenal’s 6th Satire (written in the days of Imperial Rome)

“A man needs only to be turned around once with his eyes shut in this world to be lost.”
- Thoreau

“I am always ready to learn although I do not always like being taught.”
- Sir Winston Churchill

"There’s no idea to which one doesn’t get acclimatized in time."
- Camus’s “The Stranger”