The most pressing problem that we attempt to solve for our clients is how to grow their hard-won savings thoughtfully.  Money only grows when it takes risk – but what risks to take?  And which risks to avoid?  Our research team gets paid to know the difference and to explain our thinking.

We draw upon the insights of experienced trader and author Nassim Nicholas Taleb as the most thoughtful voice on risk and uncertainty.  Especially in light of the tremendous volatility of recent days, we highlight his work and how it has informed how we invest.  The bottom line for us is that we are in the “stay-rich” business of helping our clients remain wealthy.  This week’s volatility highlights the danger of falling for late cycle “get rich quick” schemes that flourish in the waning days of an extended boom.  Many of these, such as Bitcoin or complex, short-volatility products, have crashed and revealed the enormous risks behind these once “sexy”.

Thoughtful Investing is About “Staying Rich” or “Getting Rich Slowly”

In his 2004 book “The Seven Basic Plots,” Christopher Booker famously outlines his belief that there are only seven basic plot lines in all of literature.

He defined them as:

I can see his logic.

I can say with confidence, after nearly two decades as a professional investor, that there are only two plot lines in investing: 1) get rich quick/something for nothing, and 2) get rich slow/no reward without risk.  Our company is in the get rich slow business of preserving client wealth.  We have never forgotten and will never forget that there is no reward without risk.  Anyone who tells you differently is selling you something.

The crash of some of this cycle’s get rich quick schemes should be a warning to us all.  In fact, I believe that their collapse helped create the historic volatility in markets this week.  Bitcoin’s crash, and those of its related cryptocurrencies, have caused half a trillion dollars in losses in the 70% or more decline in these markets over the last 6 weeks.  As huge as these losses are, however, they are less than the near-total loss suffered by investors owning complex derivatives in short-volatility strategies.  While it’s hard to say with confidence how much capital was devoted to this “strategy,” I have seen estimates placing it as high as $2 trillion.  Many of these collapsed this week when volatility, as measured by the VIX, spiked to the highest percent change in its history.

You can read more about this technical topic at the link below.  After years of smooth and stunning gains, many of these products lost all their value in just a few days, as the chart below displays in the near straight line drop from $144 to $6 of XIV, a short volatility exchange traded fund. 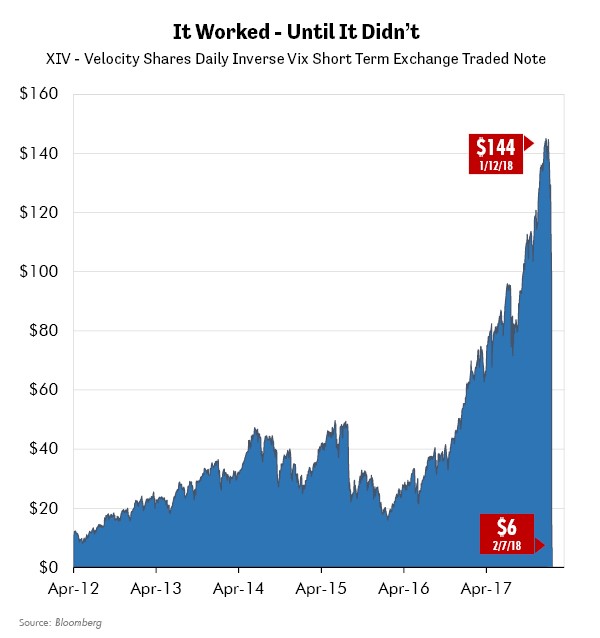 This pattern of a steady rise for years (the trade was “working!”) to instant collapse is a familiar one to our readers.  We profiled almost the exact same chart from Taleb back in November of 2017 in “Don’t be a Turkey!” and highlight it below again in light of recent market events.

There is No Reward Without Risk.  Understand the Risks That You Are Taking

While the products and names change, the pattern has always remained the same.  In the waning days of an extended boom, a vast ecosystem has sprung up offering glitzy short term fixes for long term problems.  These don’t work in the real world and definitely do not work in the financial markets.

The same wistful hopes for gain without pain that are behind the “4 Hour Work Week” or “Eight Minute Abs” get sold every day in the market too in the form of seemingly “can’t lose” investments or investment products.  Often the chief justification in convincing people to buy these is – sadly – that they have worked.  But what is the risk that the “successful” holders took to gain that return?   This is the most important question to ask.

One of Taleb’s most important points is to show the payoff structure of a simplified trade: the well-being of a Thanksgiving Turkey, as shown below.  The Thanksgiving Turkey thought he was getting something for nothing thanks to the care of the farmer!  Who could possibly question the outcome to date?  The numbers didn’t lie!  Every day the farmer fed the turkey.  Maybe the turkey even bragged about his success to his friends.

And who could question the turkey’s confidence? The trade (short volatility, Bitcoin, etc.) was working! 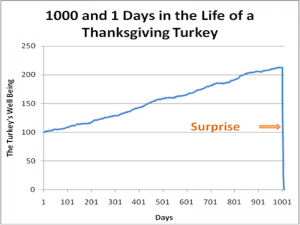 You and I both know that what was really happening was that the turkey was being fattened for the kill.  His “gains” were earned at an awful risk.  Only at the end, all at once, did he learn the terrible truth.  But, to the turkey, the success of his trade was undeniable.  It worked!  Until it didn’t…

Taleb: Don’t be a Turkey!

Taleb’s first non-technical publication was 2005’s “Fooled by Randomness” which launched his second career as a philosophical essayist.  His prior career was as a professional managing complex options.  He is a successful practitioner speaking from decades of first- hand experience in the market. 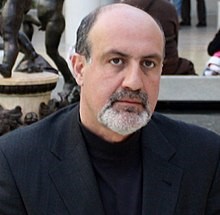 He continues to publish in his chosen field of study, decision making under opacity, to this day.  I recommend you read his full body of work on this topic in Nassim Taleb’s Incerto Series.

I would like to share with you a piece of similar advice I received many years ago from another skilled practitioner tasked with decision making under uncertainty.

In the summer of 1999, when I was a summer intern for Capital Research in Los Angeles, I had the good fortune to meet Jim Dunton.  Jim had been in the investment business for almost forty years and was the lead portfolio manager on the firm’s Washington Mutual Investors Fund, which managed at the time $65 billion (now $102 billion).

Jim, a graduate of the University of Virginia’s Darden School of Business, was the epitome of a southern gentleman.  He went out of his way to help me, an Alabama native, feel at home in Capital’s headquarters in sprawling Los Angeles.  Not an easy task!

On my last day before I was to return to Wharton and finish my MBA, I stopped by Jim’s office to thank him.  The end of our conversation went something like this:

Me: Before I leave, I want to ask you: what one piece of advice do you have to help me be a better investor?

Jim (laughing): How can I possibly summarize the lessons of a forty year career of investing into one piece of advice?

Me: I don’t know but you’re going to have to try!  I am not leaving until you do!

I think often about Jim’s advice.  There are many lessons that such an experienced and accomplished investor could have shared with me.  Think about all the things he could have said but didn’t.   He didn’t say “be brilliant” or “be bold.”  Instead he said “don’t make any big, stupid mistakes.”

Every day when I come into the office I think about how to avoid making big, stupid mistakes.  That kind of thinking is behind our philosophy of “winning by not losing.”  Not all risks are worth taking.  Our job is to discern the good risks from the bad ones – as Taleb advises.

Make no mistake: all investments have risk.  Returns are something that you earn only after you have taken the risks.  This is an old lesson that many investors, such as those in short volatility products or Bitcoin, are learning again now.

I hope that other investors will learn – before they have to suffer losses - that it takes more than a history of “working” for something to be a good investment.  Taleb’s turkey knows that some things work until they don’t – then they don’t work at all.

The fact that we are seeing more and more high profile crashes in the market is a sign that we are late into an extended upcycle.  It’s also a sign that we have to be on guard for the un-intended consequences on our own investments of the collapse of other, more speculative endeavors.  In a pinch, people sell not what they want to sell but what they can sell, harming the valuation of even sound securities.  This is the logic behind the Wall Street saying that “when the police raid the cat-house, they take away the piano player too.”

We try to manage this collateral risk by making our portfolio more conservative the deeper we get into the cycle, particularly through our ownership of hedges such as gold linked investments and higher quality bonds.  You can learn more about this philosophy and why we follow it here.

This strategy is the best way we know of to preserve capital deep into the final innings of an extended boom.  This is the trade-off necessary to control risk.  We think it’s the best way of avoiding making a big, stupid mistake with our clients’ money.  I think Jim Dunton would approve, but more importantly, this is what our clients are counting on from us. •

"There are decades when nothing happens; and there are weeks where decades happen."
- Lenin

"A Black Swan…is an event…that is both unpredicted by some observer and carries massive consequences."
- Nassim Nicholas Taleb

"It is a curse to have ideas that people understand only when it is too late."
- Nassim Nicholas Taleb

"To understand how something works, figure out how to break it."
- Nassim Nicholas Taleb

"...to succeed in life requires a total inability to do anything that makes you uncomfortable when you look at yourself in the mirror."
- Nassim Nicholas Taleb

"We die only once, and for such a long time."
- Moliere

"The unexpected has happened so continually in my life that it has ceased to deserve the name."
- Arthur Conan Doyle ‘s Sherlock Holmes

"If anything can go wrong, it will."
- Murphy’s Law

"General principle: the solutions (on balance) need to be simpler than the problems."
- Nassim Nicholas Taleb

"Failure resistant is achievable; failure-free is not."
- Nassim Nicholas Taleb

"Let us find what risks we can measure and these are the risks we should be taking."
- Nassim Nicholas Taleb

"People should only teach what they have learned organically."
- Nassim Nicholas Taleb

"Only when the tide goes out do you learn who has been swimming naked."
- Warren Buffett