The Blind Men and the Elephant: De-Globalization Accelerates as Tariffs Rise

Steel tariffs, and those on aluminum too, are much in the headlines.  We maintain our long-held bullishness on the U.S. steel sector for reasons that have nothing to do with tariffs, and everything to do with more deeply rooted fundamentals - namely an increase in the cost to produce steel in China.  We do, however, believe that President Trump’s recent tariff announcements are one part of a larger, ubiquitous trend that is re-shaping so many markets: the rise of nationalistic populism.  We explore this trend to understand the larger forces at work in our markets. 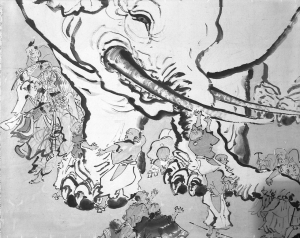 Understanding the Whole: Studying History Pays off During the Financial Crisis

In 2006 I had the good fortune to work with a handful of truly brilliant thinkers who helped me understand how the housing boom would turn to bust and cause a global financial crisis.   I was convinced that we were facing the biggest financial crisis since the Great Depression.  But how to prepare for something that hadn’t yet happened?  My first thought was to study history.

So, I read every book I could find on the history of financial disasters, starting of course, with the “History of Financial Disasters 1763-1995,” (in three volumes) and dozens of other such books, many of which I have reviewed in these pages.  I probably read 10,000 pages in record time, convinced that there wasn’t a moment to spare.

This comprehensive study was helpful for two reasons.  First, to visualize the crisis in its totality - from its quiet start all the way to its screaming crescendo.  This gave me a huge advantage over those to whom each day’s news revealed only a tiny bit of the bigger puzzle - the way each of the blind men perceived the elephant.  Second, this comprehensive study helped me to understand the interaction of bedrock principles - financial leverage, liquidity, confidence, and how they could conspire to create disaster from a seemingly trivial beginning.

Studying the Whole: The History of Political Turmoil and the Ending of the Existing Order – Will it Pay Off Too?

My history studies switched to politics in 2010 when Greece needed its first bailout.  This revealed the fault lines in Europe’s overly leveraged financial system, and how vulnerable it was - especially its banks - to any change in the existing political order.

Since then I have examined historical changes from a more globalized system led by a dominant country to whatever forms have succeeded it - both at the level of national governments and in international relations.  Many examples come from the 1930s, but there are dozens of other examples of political regime change and its consequences.

The Five Parts of the Elephant

You can’t begin to understand the events underway until you embrace the profound voter anger in many countries.  The perception is clear that the elites have failed us.  The bailouts and weak growth that followed the Global Financial Crisis bailouts are proof to most that the system is not working for citizens as they expect it should.  This is the failure of traditional centrist politicians and is a recurring theme. We wrote about this trend before it was news, before Brexit and before President Trump's win. This trend is global and is certainly true in the United States.

It’s very important to understand the real human toll that globalization has wrought upon those Americans unable to adapt.  Populists are right when they note that the hollowing out of the American middle class, especially the loss of manufacturing jobs, has robbed the middle class of its surest path upward.  Civilizations do very poorly indeed should their middle classes ever stop looking up to the wealthy, stop aspiring to be wealthy, and start concluding that the wealthy only got there through a “rigged system.”  This creates a hotbed of resentment from which wealth expropriation, through taxes or otherwise, has always sprung.  After all, if people come to believe that the wealthy didn’t earn their money fairly, then what harm is there in seizing that wealth, right?

As national politics change, expect international politics to change as well.  The driver here is the inability of the current international trading system to deliver the benefits that citizens expect.  Remember that the Doha round of trade talks under the World Trade Organization collapsed years ago.  This was the first time ever in the post-World War II era that a round of trade liberalization talks stalled for good.  That happened years ago.  This week’s tariff spat is simply the logical extrapolation - with a long delay.  Other aspects of our post World War system that will likely also change extend far beyond international trade rules and extend into the realm of national defense with NATO and the United Nations.

As our ability to maintain the security umbrella for our allies wanes, we cannot be surprised as they start fending more for themselves with an independent voice.  As we back away from these prior responsibilities, no doubt we will save money.  But do not be surprised at the logical conclusion of this trend: the re-armament of our formerly dependent allies, most notably the Germans and the Japanese.   We fought a World War to the death to defeat them, with Americans fighting and dying on foreign soil, is it really in our long-term interest to encourage their re-armament?  In time, the chances of a global arms race are higher than most think.

One of the least understood yet most deeply profound of all the parts of this elephant are the inherent flaws in our currency system.  Countries that could game the system, have gamed the system, by devaluing their currencies versus the dollar to lower their costs and promote a trade surplus with the U.S.  John Maynard Keynes understood this flaw and the need to punish those with a chronic trade surplus, rather than just to penalize those with a chronic trade deficit.  But his proposal did not make it into the final draft of Bretton Woods or any part of the post-World War Two systems that followed, such as the floating exchange rate system.  This flaw is one of the most profound curses we face since our currency is used by the world as the global reserve currency, as Barry Eichengreen explains in his brilliant work “Exorbitant Privilege.”   The world’s constant demand for reserves means a chronic and systemic over-valuation of the US dollar relative to all our trading partners.  Therefore, as long as the dollar is the world’s reserve currency, it is likely to remain overvalued causing a persistent trade deficit.  A sustainable solution will elude us until we fix this core problem.

We have written before about our bullishness on the prospects for companies operating in the U.S. steel industry, which have nothing to do with any tariff changes.  Our views remain unchanged.

We expect that higher volatility is here to stay and is likely to increase as we near the end of this already elongated cycle and the world’s central banks wind down their asset purchases, which were really thinly disguised volatility suppression.  Our portfolios are appropriately defensive for these reasons.

We are willing to contemplate that growth expectations may surprise to the downside given the huge rise in political and economic uncertainty that is accompanying this regime change.  Capital investment is the most volatile component of the economy, and its easy to see how rising uncertainty may lead executives to delay investment and seek more clarity.

Traditional safe havens such as gold and U.S. Treasuries are unlikely to remain scorned asset classes, which is why we continue to endorse their ownership as hedges to an equity heavy portfolio.

In particular, we remain on the lookout for signs of stress in Europe’s highly leveraged financial system.  Financial leverage exacerbates volatility so pay attention to any emerging signs of European weakness, where leverage is the highest and the currency flaws the greatest.

We have found many reasons to be bullish on U.S. defense companies, we are now exploring defense contractors overseas who may profit from the global trend of re-armament that we expect.

The election of Donald Trump in the U.S., and the rise overseas of other populist nationalists, shows that the world’s political system is undergoing one of its most profound realignments in the Post World War II order.  It would be a mistake to believe that this will not change our economy in many ways.

As with any change there will be winners and losers, which for us means that there will be investments that will prosper and others that will falter.  Our challenge is to discern the most profitable way forward, in a world of rising volatility and much change.  This challenge is not for the meek!  Still our research team believes that, as always, the tools of fundamental analysis are equal to the challenges that we must overcome if we are to succeed. •

"A group of blind men heard that a strange animal, called an elephant, had been brought to the town, but none of them were aware of its shape and form. Out of curiosity, they said: "We must inspect and know it by touch, of which we are capable." So, they sought it out, and when they found it they groped about it.  In the case of the first person, whose hand landed on the trunk, said "This being is like a thick snake." For another one whose hand reached its ear, it seemed like a kind of fan. As for another person, whose hand was upon its leg, said, the elephant is a pillar like a tree-trunk. The blind man who placed his hand upon its side said, "elephant is a wall.” Another who felt its tail, described it as a rope. The last felt its tusk, stating the elephant is that which is hard, smooth and like a spear."
- Ancient Indian parable

"The beginning of wisdom is to call things by their proper name."
- Confucius

"Political change is the slow silence before the big change."
- Qiao Mu

"Only a fool learns from his own mistakes, a wise man learns from the mistakes of others."
- Bismarck

"The art of being wise is the art of knowing what to overlook."
- William James

"To expect and dread a thing for a lifetime; does not prepare you for the thing itself."
- Mary Stewart

"[investing] is not supposed to be easy.  Anyone who finds it easy is stupid."
-Charlie Munger