What we believe to be the biggest change in decades is underway in monetary policy, which is creating new winners and losers in the markets. Central banks are selling hundreds of billions of dollars of investments, as quantitative easing (QE) reverses. QE’s aim was to suppress volatility and levitate asset prices. It worked. It’s also ending now. What does this mean for the markets?

There are three aspects of gold as a portfolio diversifier that we will explore today.  First, why demand for gold may be primed to regain its luster in a post QE world.  Second, how gold equities may be especially undervalued here as QE ends.  Third, what the psychology of investing has to say about the above.  We will start today’s journey with a story that reveals the abyss into which gold related sentiment has plunged.  In my experience, this is often the best place to find compelling values and thus begin a successful investment campaign.

"So what if nobody needs you, it takes a real man to fight off loneliness. A Maytag Repairman, the loneliest guy in town." - Maytag's first commercial with the lonely repairman

A few days ago, I was speaking to a good friend of mine, a talented analyst whom I have known my entire career.  He has been seemingly cursed to cover the gold mining sector for decades now.  He admitted to me that as he looked ahead to the new year, it was a challenge to find anything positive amidst the wreckage.  His coverage of many long years of weak performance meant that no one seemed to care about his stocks.  We joked that he was the “Maytag Repair Man,” waiting by a phone that never rang.

Our conversation reminded me of one I had fifteen years ago at the painful bottom of another extended downcycle, so I shared it with my friend, the Maytag Repair Man.

“In the real dark night of the soul it is always three o’clock in the morning, day after day.” – F. Scott Fitzgerald’s The Crack Up

One of my best friends back in 2003 at T. Rowe Price, was the analyst charged with covering the oil services sector.  Its deeply cyclical companies provide equipment and services to oil producers.  My friend had patiently identified his valuation-driven entry points and invested.  But it was a deep downcycle.  The stocks had fallen 50% from their prior peak - five years prior.  It was kind of getting ridiculous.  Cheap stocks, as they so often do, got cheaper.  The news was horrible.  Every single day the stocks seemed to go down.

I will never forget the day I walked into his office, there on the 8th floor in downtown Baltimore, to find him staring at his computer screen.  “Why?  Why?” he mouthed quietly to no one in particular.  His largest holding and favorite idea had just cut its earnings estimates and even eliminated its tiny joke of a dividend, adding insult to injury.  It was down huge.  Again.

He could imagine what the day held for him.  Another long and painful day of explaining why this investment would be a great idea when the cycle turned, despite its disappointing short-term performance.  He put his head on his desk.  He needed a quiet moment.  I could imagine his inner monologue, “Make it stop!” he was thinking.  I know because I had been there myself.  Many times.  My experience allowed me to step back dispassionately and examine it objectively.

My friend the Maytag Repair Man and I shared a good laugh over this story, because all the funniest things are true.  We had both been there.  Many times.  This is the psychology of bottoms.  It’s the hardest to see for those who are the closest to it. Gold feels that way to me now.  But I believe there is much more to the merit of gold right now, especially as a portfolio diversifier in a post QE world.

“The intelligent investor is a realist who sells to optimists and buys from pessimists.” – Ben Graham

Long-time readers will know that John Exter’s “Inverted Pyramid” is a foundational framework for our risk management over the course of the cycle.  This framework suggests that when a bull market becomes a bear market, capital flees the larger but riskier markets for equities and more illiquid assets for the relative safety of stronger, more liquid credits such as gold and U.S. Treasury bonds.

Perhaps the best way to understand gold’s diversification value is to follow the story of its investment demand as displayed in the world’s gold-linked exchange traded funds (ETFs).  When investors buy many of these gold-backed ETFs, the ETFs buy gold in amounts that we can monitor daily.  To me, the pattern displayed below suggests a clear conclusion: QE’s success was in many ways gold’s failure. Who needs gold’s portfolio diversification when QE is levitating riskier asset prices?  But when volatility returns, demand for gold rises.

A key moment in QE was the July 2012 promise of Mario Draghi, as the leader of the European Central Bank, to “do whatever it takes” to stop the sovereign debt crisis then unfolding in Europe.  Financial stress promptly collapsed in Europe and elsewhere, taking with it the perceived need for gold’s diversification.  So, demand for gold fell while riskier assets rallied.  John Exter would not have been surprised. 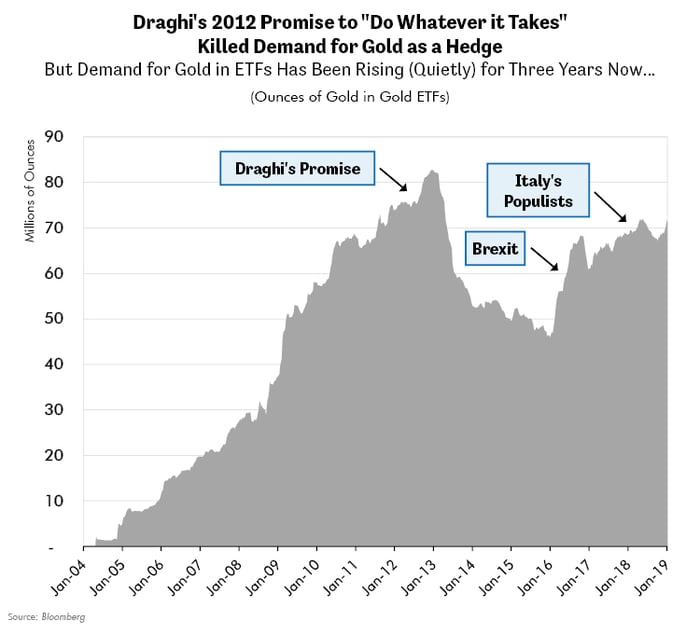 The 72 million ounces of gold now in these ETFs totals $92 billion, a drop in the ocean of global asset values.  I find it interesting that we can see the slow return of volatility in the spike of holdings related to Brexit and again when Italy’s populists sparked the return of risk in the prices of Italian sovereign debt.  Investors seem to believe that risk is returning to global markets and are seeking gold to diversify that risk.

“History repeats…first as tragedy, then as farce.” – Karl Marx

The chart below displays the dramatic de-rating in the gold mining sector into the peak of the Internet Bubble, and very recently, as these stocks’ relative price/book valuations crashed versus the S&P 500.  In fact, on this valuation metric, currently gold mining equities trade below their valuation during that epic stock market bubble.  Dr. Hussman’s view on gold mining equities was rewarded as they performed strongly during the 50% equity collapse that followed the end of the Internet Bubble.

Does this suggest Dr. Hussman was onto a deeper truth?  Could ownership of such gold mining equities again prove their merit in diversifying today’s equity portfolios?  We think the answer is yes.  We see in today’s markets the opportunity for them to re-rate to higher valuations that should accompany a rational investor’s rising demand for portfolio diversification in a post QE world. 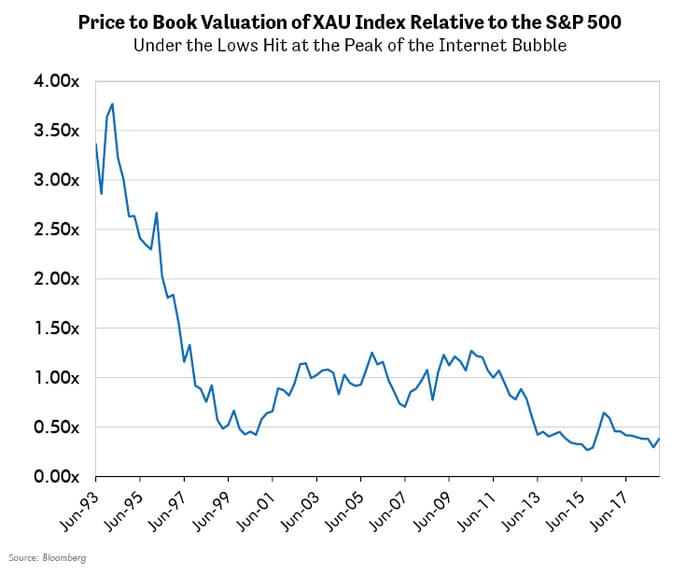 I would highlight that for many years we have been very circumspect about the challenges that accompany investing in gold mining equities.  Our long experience with the group has taught us to be cautious when considering its investment merits, which most strongly expresses itself as riskier assets such as equities are peaking.  Our experience trading hundreds of cycles has taught us that there is a time for everything.  We can increasingly see the investment case for these equities become clearer by the day.  We believe that we are approaching the most profitable window during which such equities may be confidently owned for their diversification merits.

As the great QE experiment is winding down, volatility is returning.  Equities are fully priced by historic standards, while portfolio diversifiers appear underpriced.  Our experience is that the combination of historically low gold mining valuations and the potential catalyst of cyclical change can improve the odds dramatically of successful investing.

But make no mistake: cyclical investing is never easy, or everyone would do it well.  The biggest cycles and the greatest successes start from the deepest depths of the blackest despair.  I see the traditional preconditions of that in the gold mining equities and the cloud of gloom in which they are enveloped.  I have learned from hard-won experience that the most successful investing journeys often begin amidst the painful depths of disappointment and doubt.  This appears to me as where we now reside in the cycle of gold investment in both the metal and the companies that mine it.  I honestly find this both comforting and familiar.  I expect our research team to identify more investment opportunities among this depressed sector in the weeks ahead as I confidently expect these investments to, once again, provide valuable portfolio diversification.