Searching for the World's Best Investments? Begin by "Inverting."

I think that the best path to identify the world’s best investment ideas starts with a process that minimizes mistakes. Charlie Munger calls this the “Inversion Principle” as we discuss today in the first of a two-part series. His framework focuses on how not to be stupid, rather than trying to be brilliant. We agree!

I have dedicated these last twenty years of my life to the search for outstanding investments. There is nothing like firsthand experience as a teacher!  During these twenty years, I have identified and owned my fair share of such ideas and come to understand the power of just a few amazing insights.  Along the way, I have also learned from colleagues at some of the world’s most respected investment companies.

Prior editions of “Trends and Tail Risks” have chronicled part of my journey.  In them I have sought to learn by studying who I believe to be the world’s most respected investors.  Some have included history’s most legendary investors such as Benjamin Graham, Phil Fisher, and Sidney Homer. Others have featured brilliant investors from whom I have been fortunate to learn from personally – such as John Neff or Jack Laporte. I realized, however, that I have made a major omission that I will now rectify.

It struck me the other day that, while I had quoted Charlie Munger liberally, I had yet to profile him in these pages.  Mr. Munger is Warren Buffett’s partner at the iconic investment company Berkshire Hathaway. Today as I write the first of a two-part series on how to find what may be the world’s best investment ideas, I think it’s appropriate to profile Mr. Munger, for two reasons.

First, Mr. Munger is worthy of our respect for the key role he played as Vice Chairman in the enormous success of Berkshire Hathaway.  The market capitalization of Berkshire is now a staggering $491 billion, making the company’s investment partnership of Buffett and Munger arguably the most successful one in the history of the world.

However, there is an equally compelling reason to study Mr. Munger’s views, and that is the uniqueness of his perspective.  Perhaps the most insightful of these is Mr. Munger’s admonition to “invert, always invert.”  Its meaning?  The best way to solve a complex problem is often to flip it around and look at it differently.  What better way to begin the study of the world’s best investments than to study how not to fail?  Frequent readers of this strategy piece will no doubt recognize instantly the similarities between this view of Mr. Munger and my own philosophy of “winning by not losing.” 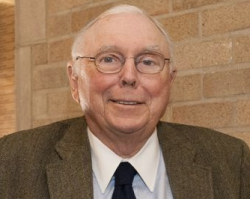 Charlie Munger was born in Omaha, Nebraska where coincidentally enough as a young man he worked at the grocery store run by Warren Buffett’s grandfather.  Mr. Munger would, however, not meet his future partner until many years later.  During World War II Munger dropped out of Caltech’s undergraduate meteorology program at the age of 19 to serve his country in the Army Air Corps.

After earning his degree from Harvard Law, he returned to California to practice law.  His interest in investing drew him away from this first career.   As an investor, he developed part of the philosophy he still has today about the merits of owning great businesses for a long time.  Mr. Munger met his future partner during a visit to his childhood home in 1959.  Interestingly, they have run their wildly successful partnership while residing in different cities.

Buffett has credited Munger as the architect who created the design of Berkshire’s success, while calling himself as Chairman the general contractor who built the company according to Munger’s blueprint.  In this metaphor, Berkshire’s management teams run its subsidiaries, “doing the real work as sub-contractors” as Buffett says. Even so, Buffett has called Munger “the Abominable No-Man” for the frequent negativity with which he would greet some of Buffett’s ideas.  Perhaps one of Munger’s biggest contributions to their partnership is his belief that it was superior to own wonderful businesses at fair prices than to own fair businesses at wonderful prices.

Charlie quotes the logic of Carl Gustav Jacob Jacobi, a German mathematician to “invert, always invert.”  Its meaning is that sometimes the best path to success may be to first understand failure and how best to avoid it!  Accordingly, today in the first part of this two-part series we summarize key failures to avoid, before proceeding in part two to the positive aspects that potentially world-beating investments share. Among the feedback I have received over the years of writing Trends & Tail Risks, is the seemingly disproportionate time devoted to what to avoid. However, I am proud to share that framework with an investor of Mr. Munger’s stature. 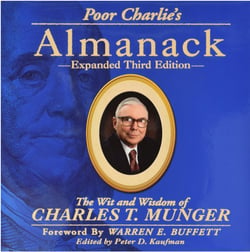 To learn more about Charlie Munger’s wisdom and insight, be sure to read “Poor Charlie’s Almanack.”

The biggest mistakes I have seen in investing can be divided into two: errors made by a company’s management and errors made by investors.  Capital allocation, what a management team does with shareholders’ money, is the greatest challenge.  I cannot begin to tell you of the decades I have spent sorting through the wreckage that follows flawed capital allocation decisions.  Of course, as value investors we can profit from a company’s prior bad decisions in the gloom and undervaluation that follow in their wake.  Clearly, such capital allocation errors should be avoided at all cost. In the forthcoming part two of this piece, we will examine the incredible benefits of capital allocation done correctly.

In my opinion, the worst three capital allocation mistakes that a company’s management can make come from 1) over-priced acquisitions made at the peak of the cycle, 2) excessive investment in the business at the wrong time, and 3) the failure to understand the true nature of how the business competes and how that competitive landscape may change.  I cannot begin to tell you how often I see major failures in one or even all three of the above, which is one powerful argument for understanding failure first before we start defining success.

Investors, as fallible humans, can also set themselves on a path of woe without any help from a company’s management team.  Victims of this slippery slope can find themselves in error for several reasons.  One of the easiest mistakes to make is to misunderstand a business’ identity.  For instance, believing that it’s a true growth business when in fact it’s just a well-run cyclical business enjoying a powerful (but soon to ebb) tailwind.  This leads to a high opportunity cost in lost profits and sometimes even outright capital losses.   Another all too common failing is to fall in love with a management team or an investment and lose objectivity.  In our investments, we are called to be rational investors, not cheerleaders.  Perhaps the greatest challenge is to forecast the durability of a company’s competitive advantage or "moat," Finally, a lesser but still painful mistake can be to pay an extravagant price even for what is arguably a wonderful business.   The future is always uncertain, so we protect our capital the best when we invest it in situations where we have identified a margin of safety.

Charlie Munger is right that sometimes the easiest way to solve a complex problem is to invert it.  The fastest way to answer the question of “how to make great investment decisions” may be to understand how to avoid horrible ones.  In the next part in this series, we will build upon this foundation to outline the positive attributes that in our experience make outstanding investment results, both at the level of a company’s management and investors’ decision making.  In the meantime, do yourself a favor and learn all you can from Charlie Munger’s unique framework of inversion.  We think often of his framework, which plays a key role in our philosophy of winning by not losing.•

“Think forwards and backwards - invert, always invert…many hard problems are best solved backward.  Figure out what you don’t want and avoid it and you’ll get what you do want.

"You don’t have to be brilliant, only a little bit wiser than the other guys, on average, for a long, long time."

“You can learn to make fewer mistakes than other people- and how to fix your mistakes faster when you do make them.”

“It is remarkable how much long-term advantage people like us have gotten by trying to be consistently not stupid, instead of trying to be very intelligent.”

“The most extreme mistakes in Berkshire’s history have been mistakes of omission. We saw it, but didn’t act on it. They’re huge mistakes — we’ve lost billions. And we keep doing it. We’re getting better at it. We never get over it. There are two types of mistakes:  1) doing nothing; what Warren calls “sucking my thumb” and 2) buying with an eyedropper things we should be buying a lot of.”

“Go where there is dumb competition.”

“Charlie and I have not learned how to solve difficult business problems. What we have learned is to avoid them.”

"There is no better teacher than history in determining the future. There are answers worth billions of dollars in $30 history book."

“Invest in seven ventures, yes, in eight.  You do not know what disaster may come upon the land.”

"The big money is not in the buying and selling. But in the waiting."

“If losses are going to make you miserable and some losses are inevitable, you might be wise to utilize a very conservative pattern of investment and savings all your life. So, you have to adapt your strategy to your own nature and your own talents. I don’t think there’s a one size fits all investment strategy."