“Science advances one funeral at a time.”

I have been watching with interest the European Space Agency’s “Philae” probe, which recently landed on a comet (of all things) after a ten year journey.  What a remarkable engineering achievement!  The probe found what it was looking for - evidence of carbon-based organics among the samples it took off the comet’s surface.  What a wonderfully vindicating day this would be for Sir Fred Hoyle, one of the most brilliant (and controversial) scientific minds of the 20th century, who predicted this discovery decades ago.  We can learn a lot about the science of investing from Dr. Hoyle – especially from his incredibly disciplined and data driven approach.

Dr. Hoyle was one of the most prodigious scientists in history.  He played a leading role in the British development of radar during World War II, one of the most important innovations of the War.  His greatest scientific research achievement was to illustrate that elements heavier than hydrogen and helium were synthesized by stars through fusion (stellar nucleosynthesis).  We are all composed of elements that were formed in stars: we are truly stardust!  This incredible discovery merited the Nobel Prize – which he never received.  Dr. Hoyle was incredible in his range as both scientist and author -- a true “Renaissance Man” – who was not afraid of controversy when he knew the data was with him.  This often led him into conflict with conventional thought and accepted dogma, which eventually denied him the honor of a Nobel Prize.

At the same time, his originality of thought led him to many insights that were literally decades ahead of their time. One of the most controversial of his views was that Darwin’s Theory of Natural Selection was a flawed and incomplete theory in that it could not explain the enormous profusion and complexity of life.  The answer to Dr. Hoyle lay in the numbers, which showed that life in the profusion in which it now exists on the Earth required more organic material, more variation, than natural selection alone could explain. So Dr. Hoyle looked more deeply into the universe and discovered huge clouds of organic material in interstellar space. Might that organic material hold the key to solving the deficiencies of Darwinism?

Sir Fred Hoyle had an unflinching belief in the data, even when it took him to difficult and uncomfortable places.  The data from Philae is the first step that suggests that perhaps Hoyle was right in his view that organic chemicals could enter the solar system carried by comets and interact with the development of life on earth.  Are we watching in real time the vindication of Dr. Hoyle’s unerring belief in the data?  This is where the investment implications come in.

Our research process is data driven.  Our goal is to expose investor capital to only the most compelling investment opportunities.  We seek out undervalued securities with a margin of safety to limit risk first and foremost.  Second, we seek to identify investments that can benefit from tailwinds others do not anticipate, which means that we enter into investments where we believe that we have multiple ways to win.  Our biggest successes will come when we get both parts of this process right.  One of our recent investments has been in the gold royalty area, which is composed of only a handful of companies globally.

Gold royalty stocks actually benefit from the distress now gripping the gold mining companies.  Gold mining is a horribly difficult business.  The worse it gets for the gold miners, the better it gets for the gold royalty stocks.  Let me explain. The gold mining stocks, as represented by the GDX index, have fallen almost 70% from their highs more than three years ago, even while the broader US equity indices keep hitting new all-time highs.  Many negative surprises have disrupted the gold mining stocks, such as labor strikes, rock falls, cost overruns, and volatile commodity prices.  Gold mining is a tough business.  However, gold royalty companies benefit from this volatility because they are the providers of capital in the last resort to the gold miners.  Alternative sources of capital to the gold miners are drying up.  Management teams at the royalty companies are taking advantage of the desperation among miners to invest capital at very favorable returns and with very favorable terms.

We have learned through long experience that wise – but aggressive – investment at the trough of the cycle is the key raw material from which great future returns are forged.  The data below suggests that right now may be just such a time.  The price of gold is very important to the performance of gold royalty stocks.  Our proprietary leading indicator of the price of gold has only been this weak 3% of the cumulative time in the last twenty three years.  Now that is rare!  Surely things could always get worse from here, such as we saw briefly in 2008, but as long-term investors it’s hard to not get excited when we find a situation that is under almost unprecedented short term stress. 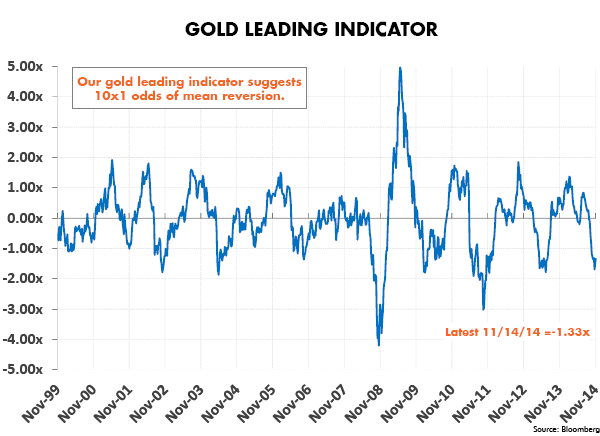 One of our favorite stocks in the gold royalty sector, Franco Nevada (FNV) has deployed $1 billion into the trough of this gold market weakness, and has another $1 billion available that it can further invest.  FNV has no debt and is run by one of the savviest investment teams that I know, including Pierre Lassonde, a legendary gold investor and former Chairman of the World Gold Council.  I have known Pierre for more than a decade when I was one of the largest investors in another company he ran.  There is no one on the planet that I trust more than Pierre to intelligently allocate capital in this sector.

FNV’s investment takes two forms: royalties and streaming deals.  The first, royalties, attaches to the land and guarantees the royalty-owner a top-line share of revenue from any mine that may ever be built on that land.  The risk to the royalty holder is limited to his initial investment.  FNV has made royalty investments that have returned as much as 400 times its initial investment.  These are of course very rare but illustrative of the power of royalty investing.  The second form of investment, streaming deals, are a form of financing where a company like FNV extends financing to low cost producers in exchange for the delivery of physical gold at an advantageous price, sometimes for the entire life of the mine. FNV’s investments it makes today may pay off for decades, in fact our estimates show that FNV’s existing investments can reasonably be expected to cash flow to FNV for more than twenty years!  This does not count any new investments the company is making during these hard times for miners.

One of our biggest challenges as investors is to avoid the “curse” of Sir Fred Hoyle, who ended up being “right” but was too early. He always followed the data.  This was his genius and, tragically, also his greatest weakness.  As investors we are always challenged to master a similar balance – focusing on the long term opportunities that we see with the humility to understand when our insights are premature.   We attempt to do so by letting the data be our guide and in thinking deeply about the precise investment we want to make and why.  Of course, we have to do all of this at the right time!  A humbling task no doubt but certainly a balancing act that Sir Fred Hoyle would understand. •