The Value of Patience

One of my first mentors in the investment business told me that “There are many ways to make money in the market. There is no one right way.”  I was surprised to hear this from him of all people, since he was an extremely accomplished investor with literally one of the best long-term track records of anyone in the country. As the years I have spent in this industry have turned to decades, I reflect often on how very right he was. Indeed in the business of investing we must be constantly learning. In this week’s “Trends and Tail Risks” we examine what we can learn from Philip A. Fisher, the father of patient growth investing, who Warren Buffett has called one of his greatest mentors.

If you tried you could not have created a more challenging environment into which Phil Fisher launched his investment company. He started Fisher & Co. in March of 1931 into the teeth of the most virulent phase of the Great Depression.  His vision was to create a specialized investment firm that would identify a select group of companies that could compound at strong rates of return over many years. Fisher believed in a very in-depth research process whose goal was to learn as much as possible about potential investments, especially by speaking with a company's suppliers, customers, and competitors. Decades later he would distill his thoughts into one of the most impactful investment books ever written: “Common Stocks and Uncommon Profits,” the updated 1996 version of which contains other valuable tracts from Fisher.

This wonderful book by Fisher details his top fifteen points to look for when it comes to identifying truly outstanding investments, which I will not fully repeat here but do heartily recommend!  What I find just as interesting is his list of “don'ts” which he created from long experience.  The three “don'ts” that speak the most to me are:

Fisher was famous for his philosophy that “If the job has been correctly done when a common stock is purchased, the time to sell it is – almost never.”  Forever is a long holding period, especially now in these days of turbocharged high frequency trading.  But for a select few companies of the highest quality, forever just might be the right length of time. 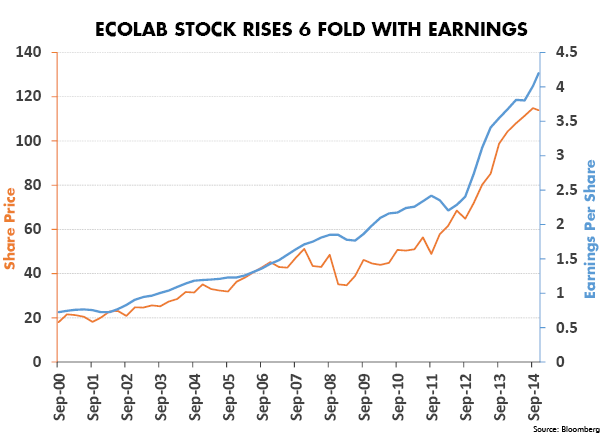 Ecolab may be one of those such companies, (ECL) a St. Paul, Minnesota based company with a $34 billon market cap.  ECL provides cleaning, sanitizing, pest elimination, maintenance products and systems to the world’s hospitality, restaurant, and institutional businesses.  Ecolab was the first company I studied back in 2000 when I joined T. Rowe Price as an analyst.  Ecolab in 2000 had robust returns on capital, strong free cash flow generation and very disciplined use of that cash into dividends, buybacks, and small acquisitions.  The company’s exceptionally strong competitive position drove its impressive financials.

Ecolab started off fixing and maintaining the dish washers for its customers.  Restaurants have only so many dishes they can use to serve their guests.  Break the dishwasher and the business grinds to a halt! From that initial service, ECL expanded to provide dozens of services to its customers at each of their locations globally, and sends one invoice per month to each customer!  Each new service Ecolab adds makes the company that much more valuable to its customers.  Ecolab is in a very strong competitive position. I have known and respected Doug Baker, now CEO, since he joined the company many years ago. The company estimates it has 10% share of a growing global market.

Back in 2000 the market had rewarded the company with an impressive 25x price/earnings ratio on twelve month earnings. To many investors who did not fully understand the company, and the strength of its competitive advantage, that seemed like a high price.  Fast forward to now and the numbers tell an impressive story: earnings have risen nearly six-fold and the stock has risen slightly more than six fold.  All the while Ecolab averaged a price/earnings ratio of 26x!  Ecolab is an example of a Phil Fisher stock that can be patiently held.  We continue to find other such exceptional businesses in the market.

As we survey the investing world, we constantly evaluate many kinds of different investment opportunities.  Some are small, illiquid and very inexpensive.  Some trade in exotic foreign markets, and some own brands that you see every day in the supermarket.  We draw from such an eclectic pool of ideas to select what we believe are the most compelling long-term opportunities in the marketplace.  But it takes more than a great idea to create a great investment.  It also takes time!  We can learn this important lesson, and many more, by studying legendary investors such as Phil Fisher.•