Activity Does Not Equal Progress: The Value of Patience and the Importance of Valuation

The two most necessary preconditions for successful investing are 1.) insight and 2.) patience. One without the other will do you absolutely no good. Held patiently, a diversified portfolio of the right investments can yield strong results. But to achieve this goal, investors must understand deeply that activity does not equal progress. Sometimes, what is called for is eternal patience, as our deeper dive on Amazon’s long-term performance demonstrates. We manage our portfolios, and the investments within them, with multi-year goals in mind. Short-term thinking can doom long-term performance, as today’s “Trends and Tail Risks” illustrates

I ran across an interesting article the other day and wanted to build upon it for our investors and friends.  The website “Irrelevant Investor” showed the long-term performance of Amazon.com (AMZN), which though only public for twenty years, is now one of the world’s largest publicly-traded equities with a market capitalization of $378 billion.  Over this time-frame, the stock has compounded at 35% per year, for a total return of near 38,000%.  The lucky investor who put his money down when Amazon’s stock first went public would by now have earned 380 times his initial investment!  Isn’t that amazing?

Surely we all wish we could travel back in time and load the boat with as many shares of Amazon as we could possibly own.  But as I illustrate below, even with the benefit of hindsight, the continuous ownership of Amazon along its volatile journey would have taxed the patience of even the most disciplined of investors.  Nonetheless, this patience we must find if we hope to be successful, especially in today’s volatile and increasingly short-term obsessed markets.  The tools we use to accomplish this goal are our fundamental research and security valuation, all expressed in a diversified portfolio.

In February of 2000 I was finishing my final year of the graduate MBA program at Wharton when Jeff Bezos came to campus.  Only days before he had been named Time’s 1999 Person of the Year.  These were heady days in the markets. 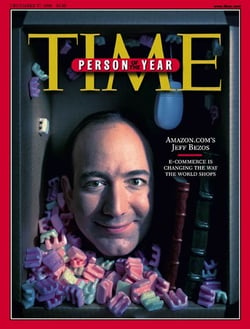 The stock market was zooming each day to new all-time highs, especially the technology-laden NASDAQ which had just hit 5,000 for the first time (a level now exceeded only by 10% despite the passage of a painfully long 17 years).  Even back then I was a “value guy” and was skeptical of the incredible valuations at which many high-flyers such as Amazon were trading.   I asked myself: could there possibly be a future so bright that it could justify these prices?  If you did the math, you just couldn’t get there.

I couldn’t make myself believe that investors would earn a reasonable return on their investments given the nosebleed prices on the highest of the high fliers of the day.  But reason was not in the driver’s seat.  A bull market was underway, a powerful one that had steamrolled all the naysayers who stood in its way.  And I couldn’t pass up the chance to meet and learn from Jeff Bezos, an icon of the new internet age that was clearly dawning.

After his speech at Penn’s Zellerbach Theatre, I fought my way down to Mr. Bezos through the mass of students thronged around him for the chance to shake his hand and ask him what advice he had for an ardent young graduate.  Above the din of the crowd, he shouted into my ear “Follow your passion!” This was a really good piece of advice, by the way, but that is a topic for another day.  Unbeknownst to both of us, his stock had already peaked for the cycle.  Its incredible collapse, and subsequent meteoric rebound, would begin one of the most harrowing journeys of any stock I have ever studied.

A Series of Unfortunate Events

From a high of more than $100/share in 1999, Amazon’s share price would plunge to $5/share in less than two years.  This is not what the good folks at Time magazine expected to happen. 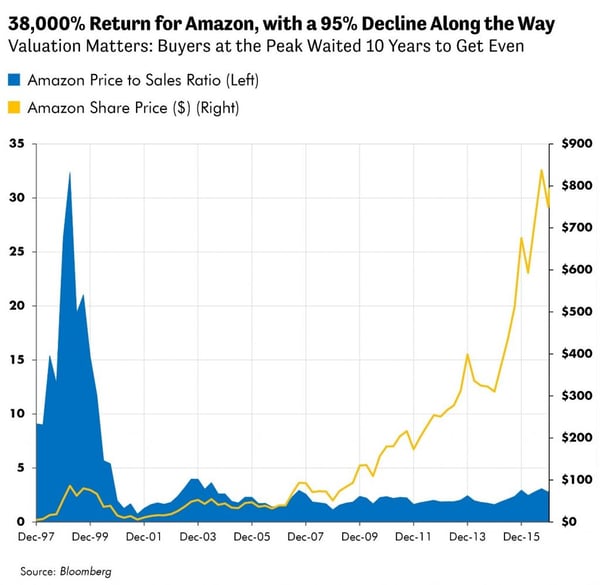 As the chart above demonstrates, the problem was one of valuation, of the price investors paid to own Amazon.  The seemingly never-ending expansion of Amazon’s valuation came to an end before the end of the economic cycle.  At its peak, Amazon’s price to sales ratio (the ratio of equity market capitalization to revenue) was more than 30 times, a stratospheric valuation more than ten times higher than the valuation at which the company now trades.

We know now that the future for Amazon's business was indeed bright.  In fact,I believe it was amazing.  Amazon’s sales would rocket nearly 100 fold from 1999 to 2016, but along the way its valuation would fall by 90%.  The combination of these counter-vailing forces – declining valuation plus improving fundamentals – would work at cross purposes to mute the return earned by shareholders.  The end result?  From Amazon’s 1999 valuation peak until now, investors buying at the peak valuation earned a more pedestrian return of 12% per year.  Twelve percent is not bad, but it’s not 35%.  The 23% per year difference bled out in the relentlessly compressing valuation of Amazon.  That’s a tall price to pay for buying the stock at such a tragically flawed valuation.

Lessons to be Learned from Amazon

Amazon was indeed an amazing company in early 2000, but those who purchased its shares at that extreme valuation would have to wait a full decade just to break even, after enduring a 95% loss in the shares over the first two years.

The first lesson is that owning the stock is not the same as owning the business.  Amazon’s stock is a claim on the business, that is true, but when the valuation of the stock is too high, investors end up owning the business at a bad price.  Such a starting place for an investor may lower the investor’s long term returns - even if it’s an outstanding business.  Valuation matters.  The price paid for an investment is one of the single biggest determinants of subsequent results.  This is why our valuation-driven research favors undervalued stocks.

The second lesson is the incredible patience it would have required to consistently own this long-term winner.  How many investors could have held on, realistically, during that 95% decline?  Who could have – honestly - watched $1 million turn into $50,000 and remained a patient holder?  I fear the far more likely scenario would have been for investors to panic out somewhere along the way, more likely near the bottom than the top.  The odds of a panicked sale would have gone up dramatically if an investor was overly concentrated in this one stock, such that its returns dominated the returns of the portfolio.  What a tragedy that would have been.

And even if, miraculously, there was a heroically patient investor who could stomach that 95% decline, there was more “adventure” to come.  Even after the initial fall that reached its nadir in 2001, Amazon’s price would decline again many times before recovering.  Its intra-year declines would be – 37% in 2002, 21% in 2003, 41% in 2004, 29% in 2005, a whopping 46% in 2006, 24% in 2007 and a punishing 69% in 2008 just to name a few.  At what point would volatility fatigue set in and send even a heroic investor packing?  No doubt along the way, patient holders had to overcome the drumbeat of negative consensus opinion that had once lauded Amazon, at its peak valuation of course, but had turned on the company, questioning the sanity of anyone foolish enough to own such an “obviously” flawed security.

I have been a professional investor for almost twenty years now.  During that time, I have seen my fair share of mistakes and committed more than my fair share as well.  Throughout this period, I have learned that investing can be simple – if we allow it to be.  But it takes courage, insight, and patience to keep investing a simple business.

We could not improve our long-term results through a hyper-focus on each short-term wiggle of each security that we own.  Few fortunes have come from brilliant short-term trading.  Many fortunes, however, have come from long-term ownership of wonderful businesses, especially when their stocks are attractively priced and can be patiently held.  Often it takes years for a true insight to play out in the markets.  The same can be said for the entire portfolio as well, since it is constructed of many securities each of which can move about in volatile ways that, in the short run, are hard to predict and are – like the volatile intra-year declines of Amazon – ultimately irrelevant to multi-year returns.

Believe me, if there were an easier or better way out there to generate returns, we would be doing it.  In this imperfect world, we strive to create a simple and repeatable investment process that gets the most out of our analytical team’s fundamental research.  The most important tools for success in this endeavor remain patience and insight.  These are the tools we use, in Mr. Buffett’s allegory, to plant the trees under which investors may enjoy the shade tomorrow. •

“Measure three times and cut once.”
– Accepted wisdom from carpentry

“It's not how far you fall, but how high you bounce that counts.”
―Zig Ziglar

“All of life is peaks and valleys. Don't let the peaks get too high and the valleys too low.”
― Coach John Wooden

“My own view is that every company requires a long-term view.”
― Jeff Bezos

“In the short run the market is a voting machine, but in the long run it’s a weighing machine.”
― Legendary Value Investor Ben Graham

“Invest in seven ventures, yes, in eight; you do not know what disaster may come upon the land.”
― Ecclesiastes 11:2

“Someone’s sitting in the shade today because someone planted a tree a long time ago.”
― Warren Buffett

“Now small fowls flew screaming over the yet yawning gulf; a sullen white surf beat against its steep sides; then all collapsed; and the great shroud of the sea rolled on as it rolled five thousand years ago.”
― Herman Melville’s “Moby-Dick, or the Whale”