The Rise of the Robots?

Robotics and automation technology improvements are reaching a critical mass. These technological advances along with bias from government policies that favor capital over labor have the robot industry poised on the threshold of immense growth.

Robots have been a staple of science fiction entertainment since sound was twinned with “moving pictures” in the 1920s to make the first “talkies.”   Since then, a long list of writers starting most famously with Isaac Asimov have featured robots extensively in their works.  By the 1960’s, robots were regularly featured in movies and television.  Amongst many memorable fictional robots, who can forget Rosie the cleaning robot from the “Jetson’s” cartoon?

Life is now imitating art.  The cleaning robot is now a reality, thanks to the Roomba vacuum cleaner made by iRobot (IRBT). 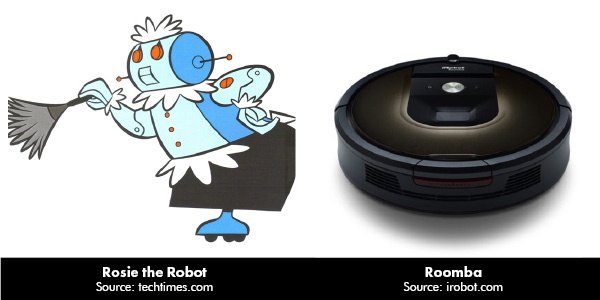 The first Roomba was introduced in 2002.  Today it has about the size and dimensions of a bathroom scale and moves about the house, vacuuming for two hours after which it charges itself and prepares to do it all over again.  Global sales have eclipsed a cumulative 10 million units!  The model my family recently purchased is the latest model, the 980.  We have been extremely pleased so far.  Apparently, we were not the only ones as sales in the US rose 47% last year.

Certainly the Roomba lacks some of Rosie’s charm and skill but it is, nonetheless, the first major labor-saving device for the home since the rapid and wide-scale adoption of the microwave oven in the 1970s.  Robotic vacuum cleaners are now 17% of U.S. vacuum sales, of which the Roomba continues to have the dominant market share.

It took decades for businesspeople, engineers, and scientists to combine all the different attributes necessary to make this machine commercially viable.  Think of all the disparate steps required.  Motors and drives had to be minimized.  The machine needed a functioning navigation system to help it “see” and find its way out of corners.  It needed guidance from a sophisticated algorithm to minimize wasted time and duplication as it cleans.  All these innovations and more have occurred and have taken robots from the pages of science fiction and placed them solidly in our daily lives.  This is only the beginning.  Many far more sophisticated robots are being developed and in the surprisingly near future a model with all the functionality of the Jetson’s Rosie is likely to be available.

In today’s Trends & Tail Risks we will be examining the rise of the robots, which are likely to be the greatest labor saving devices ever invented and may drive bountiful investment returns for those who understand the technology and the companies who are going to be the industry leaders.

Subsidizing Capital at the Expense of Labor: Unintended Consequences from the U.S. Federal Reserve

A deeper dive into the future of robotics begins, surprisingly, with a seemingly unrelated topic: the U.S. Federal Reserve (the Fed).  In 1977 Congress clarified the original Federal Reserve Act of 1913 by expanding the Fed’s mandate to include “the goals of maximum employment, stable prices, and moderate long-term interest rates.”  These goals are known today as the “dual mandate.”

Of course, the Fed’s tools for achieving the dual mandate were the setting of short term interest rates and market operations that impacted interest rates.  Most of the time over the past 40 years the Fed has kept interest rates low with an intact trend of ever lower rates (with every cycle experiencing lower lows and lower highs).   This has resulted in an enormous mountain of debt that now requires even more continuously low interest rates to avoid undo financial stress.

Surely one unintended consequence of these lower rates is an increasing subsidy of capital relative to labor.  As interest rates get lower the relative attractiveness of investment over labor increases.  Although the official unemployment rate shows near full employment, more broad based measures show that employment among many parts of the population is persistently much lower now than it has been in the past.

Businesses use the key inputs of capital and labor to grow.  Managers must choose the optimal mix from among these factors.  Both cost money.  However, the Fed’s low interest rate policy is a subsidy to capital making it cheaper relative to the cost of unsubsidized labor.  In fact, labor is taxed (payroll taxes, income taxes, etc.) making it further relatively unattractive.  So it should be little surprise that the returns to labor have been suffering relative to the returns on capital and thus labor is suffering. It seems it is not easy to achieve the dual mandate.

We Populists are from the Government and are Here to Help

One of the principal forces behind the populist movements, both here and abroad, about which we have been writing (A Bull Market in Populism and De-Globalization, November 2016) is the pressure that labor is under.  Fed policy is at least partially to blame.  However, populist attempts to help it's labor constituents might further exacerbate the problems.  Certainly raising minimum wages around the country further incentivizes business owners to substitute cheaper capital for more expensive labor.  Less well understood is that protectionism will likely do the same thing.  Forcing business owners to use more expensive legal domestic labor may only accelerate the replacement of more expensive labor with capital intensive robotics.

Robots are the Labor Saving Capital of the Future

Robotics and automation are the forms of capital most likely to be used to substitute labor.  This is because the technologies necessary for game changing robotics and automation are all seemingly approaching the critical mass required for transformative change and wide scale commercial adoption.   When we first wrote about these changes being underway, two years ago (Secular Trends Uniting, February 2015), we did not foresee how populist politics could supercharge this trend.  We understand it now.

For the last two years we have been monitoring robotics companies and the industries in which they compete.  Many of these companies are leaders in the technologies necessary to make a unified robotic product or in the specialized application of a more narrow, but powerful, solution.  A number of key technologies include 1.) computing and processing functions necessary to enable robots to work independently, 2.) “thinking” by artificial intelligence, algorithms, and machine learning, 3.) sensing information about the environment such as through visual mapping, GPS technology, and highly sensitive grips, 4.) directing the movement of the machine, and 5.) the integration of all these necessary steps into a fully functioning whole.

Thankfully, our research has uncovered many examples of companies in fields as diverse as consumer products such as the Roomba, to factory automation, to self-driving cars and auto fleet optimization, to medicine and even oil services, just to name a few.  We have a short list of companies with leading management teams who have devoted their professional lives to solving these important problems.

In our ongoing work to identify the winners, we use the same discipline that has served us so well for so many years in previous investments:  Who are the business leaders creating a culture of success that is winning now and will lead them to succeed in the future?   Which businesses are creating an island of valuable skills that will yield rising and sustainable profits in the future?  Which problems are the most important, and thus most valuable, to solve?  Which foundational technologies and skill sets will be at the core of tomorrow’s innovation – the microchips of the robot age?  It’s not an exaggeration to say that fortunes await those who will answer these questions correctly.  Until we can add the crucial and final step of integrating the answers above with our own proprietary valuation analysis our work remains incomplete.  A daunting task to be sure but the rewards will be well-worth the effort!

We should seriously heed Nils Bohr’s warning about the difficulty of prediction when it comes to the future.  But an idea that one cannot stop pondering is the close relationship between stock market indices and industrial production. There has been a near 90% correlation over the last 100 years between the two here in the United States.  This close correlation makes intuitive sense given the extreme importance of companies driving long-term productivity growth to industrial production and thus living standards.   Such companies in aggregate are the stock market.

This realization helps us find comfort in an uncertain and rapidly changing world.  When that future day arrives and we truly do find ourselves in a profoundly robotic world, could the accompanying productivity boom drive industrial production to levels that may shock even the bulls?  The time between then and now may be very long indeed, or it may be far closer than we think.  The prospect is surely one worth pondering.  Given the stakes, we intend to keep an open mind!•

“Prediction is difficult, especially if it’s about the future.”
―Nobel Prize Winning Physicist Niels Bohr, the Father of Quantum Mechanics

“Its kind of fun to sit there and out think people who are way smarter than you because you’ve trained yourself to be more objective and more multidisciplinary.  Furthermore, there is a lot of money in it.”
― Charlie Munger

“The advancement of machines, from year to year, taxes our credulity and seems to presage the arrival of that period when human improvement must end.”
― Henry Ellsworth, Commissioner of the United States Patent Office in 1843

“I wonder whether any other generation has seen such astounding revolutions of data and values as those through which we have lived.  Scarcely anything material or established which I was brought up to believe was permanent and vital, has lasted.  Everything I was sure or taught to be sure was impossible, has happened.”
― Winston Churchill

“The number of transistors incorporated in a chip will approximately double every twenty-four months.”
― Gordon Moore, Intel’s co-founder and the author of “Moore’s Law”

“The most obvious characteristic of science is its application: the fact that, as a consequence of science, one has a power to do things. And the effect this power has had need hardly be mentioned. The whole industrial revolution would almost have been impossible without the development of science.”
― Nobel Prize Winning Physicist Richard P. Feynman