An Investment Lesson from Homer's Odyssey

Investors must protect themselves from the Siren song of deceptively important “news.”  While news can change daily, the value of a company’s assets and business change only slowly. Disciplined, fundamental research creates true insight that can mute the allure of current news.  How else can investors hope to avoid making bad short-term decisions at the expense of long-term goals?   Over time, a focus on what really matters is what leads to investment success.  The key?  Do the hard work in advance to determine the value of your investments.

When Homer wrote “The Odyssey” around the 8th Century B.C., he couldn’t have known that his epic poem held an important investment lesson.  “The Odyssey” followed the struggles of its hero Odysseus’ travels toward home after the conclusion of the Trojan War.  One peril he and his crew had to overcome was to sail past the land of the Sirens.

The Sirens were known for their seductive and irresistible singing, which invariably lured the sailors who heeded it to their death on the rocks of their island.  Odysseus prepared to overcome this challenge by stopping up the ears of his sailors with beeswax.  He, however, was curious to hear their famous song and had his sailors tie him to the mast of his ship so he would be unable to respond to it.  The song that he heard was the false promise of better knowledge if he would only sail closer to the rocks to hear it.  His precautions paid off as his sailors passed safely by the Sirens as Odysseus begged for release to swim to his certain doom among the killing rocks.

The Investment lesson in this?  The importance of preparation in investing and the discipline that it provides to ignore the deceptively alluring – and often fatal - Siren Song of “news.”

Prospective clients always ask about investments that have gone wrong.  This is a great question. Anyone who has been investing as long as we have - nearly twenty years now- has made their fair share of mistakes.  Successful investing is not defined by zero mistakes, rather by a disciplined process that makes fewer mistakes – and less costly ones.

The real world of investing is noisy, volatile, and irksome.  These frustrations arise because we must man the investment helm daily on a very long-term journey, numbered in years, over the disturbed seas that are today’s investing climate.

Quite possibly the biggest challenge in this journey is the discipline to ignore alluring and ever changing “news” that might cause us to make rash decisions on buying or selling investments.  The rope that we use to restrain ourselves is the discipline of valuation.  Only through preparation, understanding the assets that our companies own and their proper valuation, can we hope to avoid the wreckage of our investment efforts when confronted with the Siren song of news flow that beckons us to act rashly.

Our investment in CoreCivic (CXW, formerly known as Corrections Corporation of America) is a prime example of this lesson. In today’s “Trends and Tail Risks” we examine the recent trading history of CoreCivic to examine how we use valuation to tie us to our ship of investment success.

We have been shareholders of CoreCivic for many years.  Our research on the company identified three characteristics that merited our investment.

First, we liked that its business, the private operation of prisons, had its own unique set of risks that had very little to do with the risks inherent in the investments we own across the rest of our portfolio.  Leverage to a distinctly different cycle helps to build defensiveness and diversification into the portfolio as a whole, because we do not want all of its components to go up and down together.  Second, we were favorably disposed towards the company’s generous dividend yield, which was 6% at our initial investment (now yielding more than 5%).  Third, and most importantly, we liked the underlying economics of the business.

CoreCivic’s chief source of revenue comes from prison facilities that it owns and operates.  These facilities are costly to build. The U.S. prison system operates at roughly 130% of capacity utilization, meaning that it is overcrowded – or thought of another way – that demand is greater than supply.  Because we know that an equity investment is a claim on a company’s assets, we take the time to understand the company’s underlying assets, their economics, and their value, particularly replacement cost.

Accordingly, our analysis calculated the replacement cost of CoreCivic’s prison facilities.  We concluded that we were buying these assets at a much lower price than they could be rebuilt for.  Thus, there appeared to be a large margin of safety.  With the comfort of these conclusions behind us, we decided to invest.  Everything went fine – for a while.  Then disaster struck. 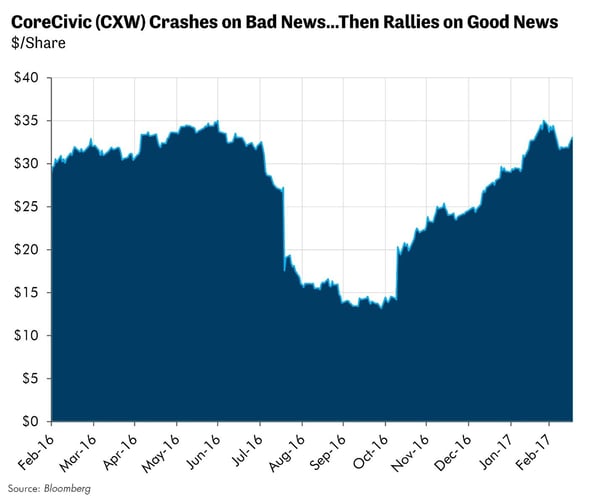 CoreCivic suffered an epic meltdown on August 18, 2016, falling by more than 50% intraday.  I remember the day quite well.   It was not a good day.

What caused the fall was the release of a Department of Justice report instructing the Bureau of Prisons to reduce the use of private prisons when contracts came up for renewal, which would happen gradually over the next few years.  Despite the total revenue CoreCivic derived from contracts subject to this report being only roughly 7% of its total business, sentiment toward the company soured instantly.  The stock crashed to $13/share where at that price the dividend yield rose to a stratospheric nearly 17%.

Never underestimate the ability of the market to wildly over-react to short-term news.

Sentiment toward the company remained low for the following few months.  Even Hillary Clinton furthered the negative perception by disparaging the company during one of the presidential debates.  Given that she was heavily favored to win the election, there seemed to be little reason to own such a company.  If one was looking at nothing more than the news, the prospects for CoreCivic seemed utterly hopeless.

Our conclusion was different, because our analysis was different.  Many investors fled the stock because they were fearful of what would happen to the company’s cash flow in the future. No one knows what will happen in the future but we chose to ask a better, and more profitable, question: Even if the government stopped using private prisons, what would the assets be worth?

The cost to replace the company’s assets did not change with the news, nor did their value.  At the knockdown price of $13/share, the company was trading at an extreme discount to the replacement cost of its assets.  Remember that the industry as a whole was operating at 130% of capacity utilization.  Unless the prison population declined dramatically, it made far more sense for someone to use CoreCivic’s assets than to build new prisons.  Therefore, they had value – if not to CoreCivic then to others.

Want to improve your investing outcomes?  Then don’t freeze when confronted with an unanswerable question.  Rather creatively find the question that you can answer.

CoreCivic is an instructive case study because it’s a real world example of how a messy and noisy world of news flow conspires to thwart investors from achieving long-term investment success.  But if we can resist the siren call of extraneous news, I believe our investment results will be the better for it.

This was not the first “accident” to befall one of our investments.  Sadly, it won’t be the last either.  Our knowledge of the replacement cost of the company’s assets did not keep us out of harm’s way: we still got caught up in a panicky sell-off.  But that is not where our story ended.

Our analysis was different, however, because before we ever purchased the first share of stock we knew the replacement cost of the company’s assets.  This asset value was the reason we could be patiently confident despite a catastrophic near-term loss.  Our reasoning penetrated far beyond the changing news on the company.  Our initial analysis understood the company’s assets, their value, and the margin of safety that they created.  We were not part of the cascade of selling when others, unable to answer the unanswerable “news” question, sold in a panic.

If investing were easy then everyone would do it successfully.  But most don’t.  Successful investing takes preparation, which means a keen focus on the discipline of valuation.

Investors who seek more profitable outcomes would be wise to heed the near 3,000 year old lesson of resisting the Siren Song of ever-changing daily “news.” Our valuation discipline, which focuses on replacement cost, is the rope that we use - like Odysseus - to lash ourselves to the mast.  How else can we profitably ignore the treacherous, though alluring, Sirens to reach the goal of our voyage?

Forty-one million shares of CoreCivic traded on the day that the Sirens turned their attention to the company.  A meaningful part of the fortunes of many investors evaporated that day.  How many millions were lost upon the rocks from panicked over-reaction to short-term news?

If we would seek to benefit from this volatility, rather than be a victim of it, then we must surely stay focused on what matters and what endures, and not on what is ephemeral and changes.  For that, we can be thankful for our discipline of replacement cost valuation.•

“You hit homeruns not by chance but by preparation.”
– Roger Maris, who held the record for most homeruns in a Major League Baseball season for over thirty years

“Success depends upon previous preparation, and without such preparation there is sure to be failure.”
―Confucius

“The world breaks everyone and afterward many are strong in the broken places.”
― Ernest Hemingway’s “A Farewell to Arms.”

“If you can keep your head when all about you
Are losing theirs and blaming it on you,
If you can trust yourself when all men doubt you,
But make allowance for their doubting too;
If you can wait and not be tired by waiting…
Yours is the Earth and everything that’s in it,
And—which is more—you’ll be a Man, my son!”
― Rudyard Kipling’s “If-”

“Before anything else, preparation is the key to success.”
― John Wooden

“No, that is the great fallacy: the wisdom of old men. They do not grow wise. They grow careful.”
― Ernest Hemingway’s “A Farewell to Arms.”