Even in the most expensive and challenging markets, disciplined value investors can find thoughtful investments with limited risk. One of the many lessons we learned from legendary investor John Neff is that its far better to be long the solution than short the problem.

John Neff is a legendary mutual fund manager.  He managed Wellington’s Windsor Fund from 1964 to 1995.  During that time, he outperformed the market - net of fees - by 3.1% per year.  Now 3.1% may not sound like a lot, but over 31 years an investment in Windsor would have returned 5,546% versus the S&P 500’s total return of 2,230%.  Interestingly, like Mr. Buffett’s returns at Berkshire Hathaway, Neff also underperformed the market for ten of those thirty-one years, twice stringing together three consecutive years of nearly 40% cumulative underperformance versus the S&P 500..

Despite these short-term hiccups, Neff's long-term track record as a disciplined value investor was extraordinary, earning him a place on Barron’s Roundtable for twenty years.  I encourage you to read more about Neff and his simple investment philosophy in the book he published in 1999, “John Neff on Investing.”  He published it in 1999 precisely because value investing had fallen deeply out of favor.  It might have been down, but Neff did not think it was out. Kind of reminds you of today's market a little, doesn't it? 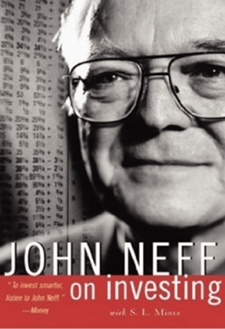 The Toughest 25% Return Neff Ever Made

What you won’t find in Neff’s book is a story I want to share with you based upon my personal experience with him.

I first met John Neff at Wharton when, during my final year in its MBA program, I took his class on investing. Talk about an opportunity!  Here it was in early 2000.  Outside the classroom, the Internet Bubble was raging.  Although few knew it, the bubble only had a few more days to live.  These were historic times to be in the markets.  Sharing that time, with an investing legend, was just one of the reasons I am so thankful for the opportunities that Wharton delivered to me.

In class we discussed Neff’s book, the many lessons from his long and storied career, and talked of the powerful but increasingly dangerous market.  After years of watching high stock market valuations become excessive, then finally freakishly dangerous, Neff admitted that in his personal account he couldn’t keep himself from shorting – betting that the price would fall - the most egregious of the internet’s high fliers: Internet Capital Group (ICGE).

ICGE’s focus on “business to business” was exactly what the market wanted in early 2000.  The stock was not without serious business backing.  Early investors included Dell Computer, IBM and General Electric to name a few.  New executives left behind established and well-respected companies to join ICGE in the hope of making a fortune in the new internet gold rush.

For a while, the market validated their confidence.  The stock doubled on its very first day of trading.  ICGE would rocket to a valuation of $60 billion at its peak on 1999 revenue of only 16 million dollars.  The internet was only a few years old.  Its potential seemed limitless.  And it was.  But not for ICGE’s shareholders. 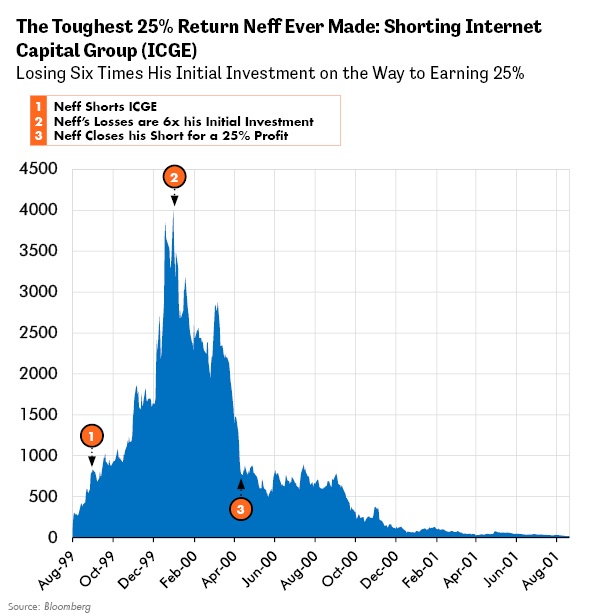 From its peak ICGE would fall 99.5% in the coming months.  Neff would suffer the value investor’s curse of being right but early.  On the way to making the hardest 25% return he ever made, Neff’s bet against ICGE would first cost him six times his initial investment.  Amazingly, as only Neff could have done, he hung onto his short position, sticking it out to profit from one of the most epic crashes in the history of investing. As a true value investor, he entered the position early and closed it early.

A Better Way to Profit During an Overvalued Market: Get Long the Solution Rather than Short the Problem

Neff shorted the "problem" of ICGE and prevailed- eventually.  The path he took required fortitude that only a few investors in the world like Neff could have summoned.  What about us lesser mortals?  Is there a less heroic way to attempt to hedge the risks of an expensive market?  We think there is.

We construct our portfolios with the goal of making them resilient to sustained downturns.  The chief tools we use are gold-linked investments and the judicious ownership of the much reviled U.S. government 30 year Treasury Bond.

These investments, and a bias toward a longer maturity and higher quality bond portfolio, help us create portfolios that we believe are “long the solution” because they can profit from the falling interest rates that are likely to accompany the next recession – whenever that is.  We believe that such a thoughtfully constructed portfolio gives us “one foot out the door” because it positions us conservatively this late into a well-developed market upcycle.  At this point in an aging equity cycle, that strikes us as prudent risk management.  For this insight we can thank Neff, and the many great investors from whom we have been fortunate to learn.

Learning from Neff: Finding Value Even in Overvalued Markets

There, at the peak of the most expensive market ever, during the 2000 technology bubble, Neff still found value. He believed that the largest and best managed homebuilders were actually unrecognized growth companies.  His “investment thesis,” as we say in the research business, was that these companies had the wind at their back and many competitive advantages that would allow them to outcompete their smaller rivals. If Neff’s view was wrong, the low valuation at which the homebuilders traded would limit the downside.

How right he was.  Even while the Internet Bubble crashed, handing the tech-heavy NASDAQ losses of 78% and the broader S&P 500 losses of 50%, the homebuilder index soared 429% from the end of 1999 to 2005.  We share Neff’s confidence that the hard-working value investor can find safe harbors from the storm, even in the most overvalued markets.

We construct our portfolios with hedges that we believe help us get long the solution rather than short the problem.  These portfolios are more tortoise than hare, which we believe is appropriate for our “safety first” philosophy. Furthermore, we are inspired by Neff’s success in 2000 that value can be found in even the most over-valued of markets.  Our clients’ money should always be working for them.  Our task is to guide this effort thoughtfully, balancing risk and reward.

This is the goal that gets us out of bed every morning and keeps us fully engaged in the markets. We believe that the right mix of investments can get our investors home safely.•

“The market can remain irrational longer than you can stay solvent.”
- John Maynard Keynes

“Many so-called value funds have suffered a rough road. As a contrarian I say that’s to be expected. When better to write a book about out-of-favor investing than when it’s out of favor?”
- John Neff

“Individual investors enjoy a key advantage over professionals in one critical respect. You can pick and choose stocks and bide your time unflustered by the fierce and often corrosive quarterly performance sweepstakes, especially in hostile market climates.”
- John Neff

“Conventional wisdom suggests that, for investors, more information these days is a blessing and more competition is a curse. I’d say the opposite is true. Coping with so much information runs the risk of distracting attention from the few variables that really matter.”
- John Neff

“I attribute success not to genius or blinding insights, but to a frugal nature and lessons well learned.”
- John Neff

“Successful stocks don't tell you when to sell. When you feel like bragging, it's probably time to sell.”
- John Neff