Hurricane Irma and the Limits of Prediction

Hurricane Irma gave all of us in southwest Florida a real world example of the limits of prediction.  In life as in the financial markets, we believe it’s better to beat the rush and panic early.  This confronts us with the challenge of acting on imperfect information, which is never easy to do.  Failing to act, however, and delaying in the hope of waiting for more “certainty” can impose a shockingly high cost upon us and on our portfolios.  Our mantra in life and in the markets is always “safety first.”

Days ago Naples bore the full brunt of Hurricane Irma, one of the largest and most powerful hurricanes ever recorded.  Given how much worse things could have turned out, we have a lot for which we are thankful.  Our families are safe.  The damage to our homes and office was limited.  All the members of our team made it through the storm safely.  Our office is fully up and running again!  Thank you so much to all of you who reached out to let us know that we were in your thoughts and prayers.  This hurricane, while a disaster, has been answered by the best of humanity.

It could have been so much worse for us and for our community.  Irma was the first hurricane to directly hit Naples in more than fifty years.  One of the most important keys to life is to always learn from adversity.  Irma’s lessons can teach us a lot about decision making in an uncertain world, especially in the financial markets.  In today’s “Trends and Tail Risks,” we outline how we can try to make better decisions given the limits of prediction.

To see your home city featured non-stop on disaster TV is an awkward experience. Such things always seemed to happen elsewhere.  Not this time.

For days, the uncertainty about where Irma would strike was rivaled only by increasingly dire warnings of the damage that could accompany the storm which peaked as a massive category five hurricane.  One such visual, displayed below, compared Irma to Hurricane Andrew, which cut a legendary path of devastation across Florida in 1992.  You could have fit three or four Andrews in Irma.  Irma was that big. 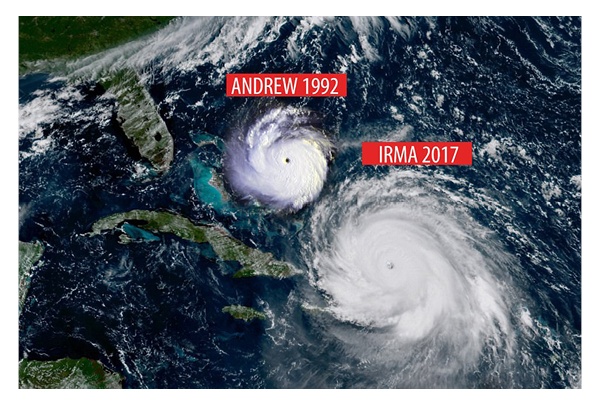 For me, the worst part of the forecast was Saturday when our neighborhood got a mandatory evacuation order due to the storm surge that was expected to accompany Irma.  My home is not in a flood zone but the forecast for a catastrophic twelve - foot storm surge would have been enough to flood our neighborhood.  My family faced the very real prospect that our home would be destroyed.  Thankfully, we were following developments from a safe distance at the pet-friendly hotel that would be our home for the next week in Atlanta, Georgia.  Following my philosophy of panicking early to beat the rush, we had been fortunate to find a hotel that would accommodate my family and Sherman the Wonderdog too.

We had been there since Thursday.  I had been out of town on a business trip while the hurricane’s forecasted path was drifting west towards Naples.  My wife Carol had driven the kids and the dog north to meet me there.  The trip took a punishing nineteen hours, nearly twice the time it should have taken.  We would learn later that my family’s travels were part of one of the largest evacuations in U.S. history.

Weighing heavily upon us was our concern for our friends, clients and co-workers who had stayed behind.  They faced daunting burdens, many of which were caused by the fear and uncertainty inherent in the approach of such a huge storm.  Our town faced the usual shortages at the grocery stores for batteries and water that could have been reasonably expected.  More problematic, however, was how quickly travel lodging became unavailable, and worse yet, gasoline shortages became ubiquitous.  The option of leaving became impossible for many people.  After all, where would they stay and how would they get there?  All kinds of unexpected things started to go wrong in ways that would have been very difficult to predict.  It was a dark time with the menace of the hurricane closing in.

Naples in the Eye of the Hurricane

I took the screenshot below at 5pm on Sunday September 9th as Irma’s eye was passing over Naples.  We wouldn’t know for sure the scope of the feared storm surge until dawn the next day.  Sunday night was a long night. 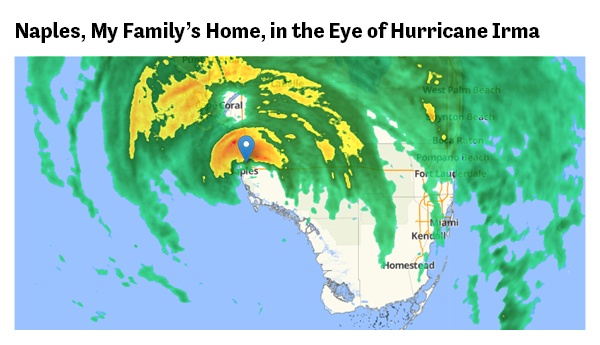 As the sun rose on Monday we found many reasons to be thankful.  The storm surge had been limited to less than five feet and a more limited duration than we feared.  Irma would grind her way up the west coast of Florida, striking fear in the hearts of residents who had yet to face her wrath.  The worst of our ordeal, however, was over.

What I Learned From Hurricane Irma

Irma’s most important lesson is one that may be familiar to veterans of the financial markets: the humbling limits of prediction.  So much of the stress and uncertainty that accompanied Irma was in the crush of panic it caused when its forecasted path swung away from Florida’s east coast toward Naples.

The course of action that was reasonable and safe just a few days prior had changed dramatically.  As the storm tracked westward, the mandatory evacuation order forced many to seek shelter elsewhere.  Worst of all, this forced migration was thrust upon people who could not find gas to travel a safe distance away, and for whom overnight accommodation was almost impossible to find.  In hindsight, it is not surprising this occurred. After all, nothing like this had ever happened before. It was the state’s biggest evacuation ever.  Still though, no one wants to find their choices limited by forces beyond their control.

The known unknown, to borrow the phrase from Donald Rumsfeld, was that the hurricane’s path was uncertain and could change.  The unknown unknown was how quickly everyone’s choices would dwindle once this more accurate forecast became available.  A cascade of failures quickly followed.  First lodging then gasoline.  After that there were only a few undesirable choices left.  This aspect of Hurricane Irma is an example of the limits of prediction, and a key reason why we choose safety first as the best motto in life and in the financial markets.

What are the lessons for our decision making in the financial markets?  One of the most accurate truisms in the market is that it can be expensive to delay your decision until you get full information.  The reason?  The market is an anticipation machine that is always looking ahead.  It’s like planning to wait until just before the next recession to make your portfolio safer.  That’s easy to say but hard to do.

Mostly, by the time you get the information you had sought, the market has already priced it in.  This is similar to the real world experience so many faced with Hurricane Irma.  Hoping to make a better decision by waiting often increases risk by limiting choices.  To delay a decision to de-risk a portfolio by waiting for “more information” is often to run an unacceptable risk of loss.

Nearly twenty years in the markets have taught us the limits of prediction.  Hurricane Irma shows us these same limitations, only in a new light.  For this reason, we seek to build in as much safety as we can now into our portfolios.  We have great respect for the unknown unknowns that may arise to thwart even the best laid plans.  We believe at this late stage of a long equity bull market that a prudent strategy is to panic early to beat the rush.

The risk we run is that a more conservative portfolio could underperform into the peak of the cycle and thus leave money on the table.  Our own view, however, is that the market’s extended valuation and the lateness of the cycle could make it prohibitively expensive to wait for too much information.  Our experience in the markets and now, again - from the lessons of Irma, have taught us the value of acting now despite incomplete information, to do what we can to protect ourselves and our portfolios. •

"I get paid to get suspicious when I’ve got nothing to be suspicious about."
- Wilford Brimley’s character, the head of security in “The Firm”

"We need to stop, and admit it: we have a prediction problem.  We love to predict things — and we aren’t very good at it."
- Nate Silver’s “The Signal and the Noise: Why So Many Predictions Fail - but Some Don't”

"All models are wrong, but some models are useful."
- George E. P. Box

"There was a difference between being stuck and choosing to stay."
- Martina Boone

"Knowing where the trap is - that's the first step in evading it."
- Frank Herbert’s “Dune”

"War is the realm of uncertainty; three quarters of the factors on which action is based are wrapped in a fog of greater or lesser uncertainty."
- Carl Von Clausewitz