Chief Conclusion: We believe that investors can best reach their goals through the ownership of a well-diversified portfolio, held patiently. This requires understanding the truism that a diversified portfolio means that while some assets are rising, others are falling. It is this diversity in the pattern of returns that can promote a smoother long-term return and encourage investors to stay fully invested and overcome the chokepoints that would threaten this discipline.

I was struck the other day with the vulnerability that all investors’ plans face in an uncertain world. In particular, I was thinking about the challenges investors must overcome. They must have not only the discipline to stick to a long-term investment plan but also the fortitude to power through the often-scary chokepoints along the way. These could be brief and terrifying, like the recent COVID-19 powered bear market, or they could linger and work on us only slowly, such as the current weakness in the bond market.

As long-time readers of “Trends and Tail Risks” would no doubt understand, I was inspired to reflect on this topic of investment challenges while refreshing my study of ancient military history – the Battle of Thermopylae. The Battle of Thermopylae took place in 480 B.C. and was one of the most important battles in the history of Western Civilization. My prior study of this battle ascribed to it this importance because it marked a key turning point in what would end up being the successful defense of Greece and Sparta against the invading hordes of the Persian Emperor Xerxes from the East, the most powerful empire of that day. Without the sacrificial valor of the brave soldiers defending their homes at Thermopylae to successfully delay the Persians, it’s likely that the overwhelming might of Xerxes’ assembled soldiers could have changed forever the course of Greek civilization, and everything else that followed in Western civilization. 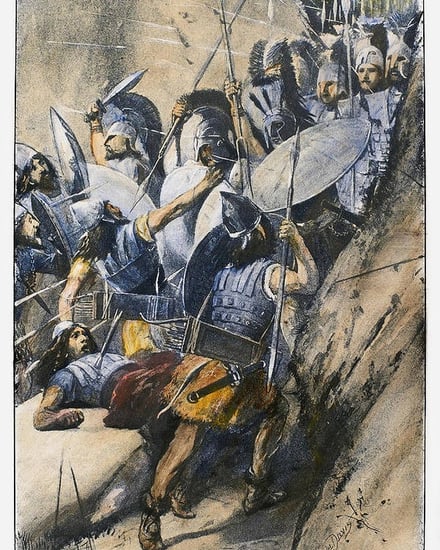 The Chokepoint at The Hot Gates of Thermopylae

Xerxes, when he planned his epic invasion of the West, had many reasons to be confident. He ruled the world’s largest empire and had the largest army, by far, in the world. But Xerxes’ plans failed him at Thermopylae, also known as the “Hot Gates.” Thermopylae was defined by a narrow pass that led from the beaches where Xerxes had landed his troops to the interior of Greece, his goal. In this narrow chokepoint, the numberless hoard of his army, the largest ever assembled in world history at the time, could not be brought to bear all at once. Rather his numerical advantage was irrelevant in the close quarters of the narrow pass, the chokepoint that thwarted him, and cost him the future he sought. He may have had a great plan, but his inability to successfully navigate this chokepoint cost him everything.

So, this time, when I re-read once more this storied battle, I appreciated it from an entirely new perspective: how it thwarted the plans of Xerxes. In my role as Chief Investment Officer (CIO) of CWA, I find myself worrying a lot about what could go wrong in the markets. In fact, I have often been called our Chief Worry Officer. It is true that I worry a lot about the risks our investments face in the markets. We spend many hours selecting investments and constructing diversified portfolios to face those risks. However, there is an even more important risk our clients face standing between them and the secure financial future that they seek through investing, one bigger than the uncertainty from a new administration, the COVID-19 pandemic, or anything else the market can throw at today’s investors.

What could possibly be a greater challenge to investors than all this? Managing their own behavior through the challenging chokepoints that stand between them and their desired financial future. Here I mean specifically the discipline of sticking with a well-diversified portfolio. Look no further than the very disparate performance of different asset classes. While equities are doing great, bonds and gold-linked investments are struggling. But isn’t this uncorrelated performance one of the chief goals of a diversified portfolio? After all, if everything in the portfolio was down on a down day and up on an up day, that portfolio would not be diversified!

Make no mistake, these equity diversifiers are still performing the valuable benefits for which they had been selected. This is rather portfolio construction working as it is meant to work! It was only a year ago when the opposite was true, and bonds and gold-linked investments were the star performers while equities collapsed. Can it be all that surprising that one of the strongest equity markets in recent memory would create some temporary weakness in traditional equity hedges?

To me, there are two things that matter most. The first is the overall long-term return of the diversified portfolio. The second is an investor’s ability to stick to a long-term strategy day in and day out, to gut through the chokepoints that would keep them from their long-term goals. That is where the value of diversification really shines. The charts below demonstrate the principle of diversification in action.

We can now see retrospectively that the tech-heavy Nasdaq was one of the best places to be invested. In the first chart below, we show the total return of the Nasdaq versus the S&P 500 and the MSCI All World Index of global equities. The Nasdaq achieved a nearly 30-fold total return over 30 years – extraordinary! But remember that to earn those returns, you had to be 100% invested the entire time, living each day in real time, with no knowledge of what the next day might hold. Is it truly realistic to assume that anyone could have powered through the chokepoint of the 80% decline in that index from 2000 to 2002? Eighty percent of your money is a lot to lose in two years.  I, for one, would not want to have my own investment plan depend on me being able to take a near-death 80% beating without flinching. Isn’t that just too much to ask? Especially for a retired investor?

Worse yet, don’t you think that the most likely place that such a “plan” calling for a 100% Nasdaq investment allocation to fail would be at the emotional lows following the 80% loss? Clearly that would literally be the worst-case scenario: taking too much risk and panicking out at the worst possible time, locking in past losses and foregoing future profits. This is a tragic outcome that must be avoided at all cost. 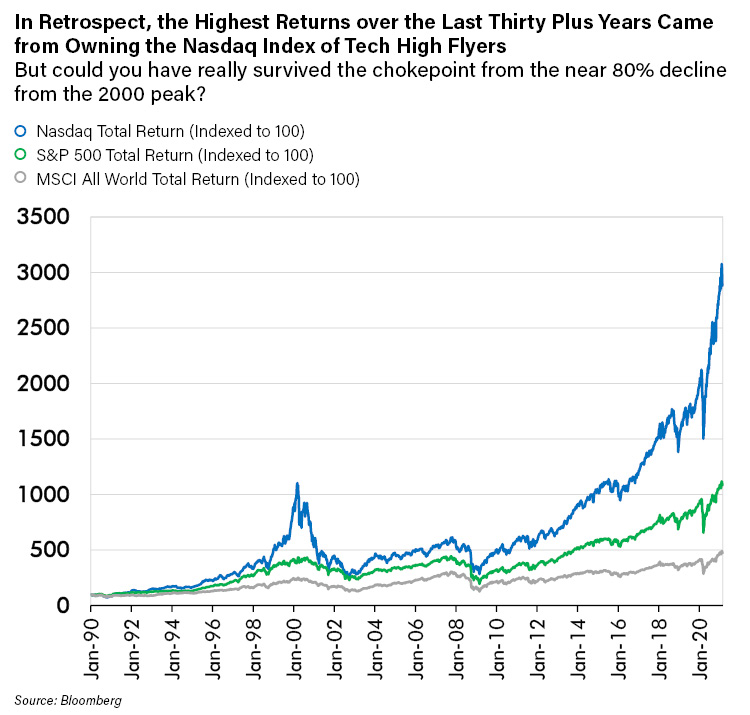 We believe that professional portfolio management can minimize the likelihood of this worst-case scenario by constructing a thoughtfully diversified portfolio. But again: remember that the definition of a diversified portfolio is that the investments in it are not all correlated. They do not rise and fall together. Some rise while others fall, and vice versa. Is that not exactly what we are seeing today: equity strength, and near-term weakness in traditional equity diversifiers such as bonds and gold-related investments?

So, our view is that one of the best benefits of a thoughtfully diversified portfolio is that it encourages its owner to stick to a long-term plan through the chokepoints that would thwart it. Below we show the pattern of returns of the tech-heavy Nasdaq versus the U.S. Government 30-year bond. Note that both investments had good returns over time. More importantly, note how the bond did best when equities did worst during the periods around 2000, 2008, and 2020. As equities crashed, bonds soared. Those were the times when the temptation to panic out of underperforming equities would have been the greatest. Bond returns counter-acted those equity losses. Bond returns could have kept you patient and focused on the long-term. 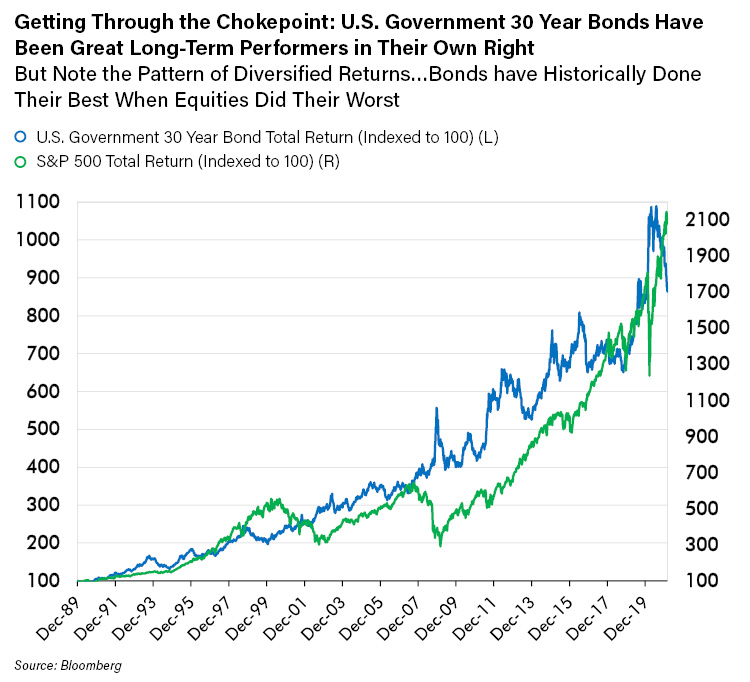 “Everyone has a plan until they get punched in the face.” – Mike Tyson, Former World Champion Heavyweight Boxer

There is no shortage of challenges to long-term successful investment. Some happen quickly – like the recent COVID-19 crash. Others take place slowly, like today’s grindingly slow but nevertheless disappointing performance from traditional equity diversifiers like bonds and gold. But we believe that these are all parts of a thoughtfully and professionally constructed portfolio.

Therefore, it’s important to understand not only your long-term financial goals but also the risks that you are comfortable taking on that long-term journey to your investing future. Any chokepoint along the way that breaks your discipline and forces you to panic can lock you into losses and lead you to needlessly question a diversified portfolio that is doing exactly what it was constructed to do.

I understand the temptation in a raging equity bull market to want to own more equities when they are outperforming. But I have also seen its darker side, the temptation to want to own fewer equities in a bear market when they are underperforming. In my opinion, we have two ways that our team can best help our clients to reach their long-term goals. First, to use our experienced internal research team to design thoughtfully diversified portfolios. Second, to help clients remain focused on the long run, powering through the chokepoints that threaten to disappoint their plans.