Déjà Vu All Over Again

California’s well-intentioned “clean energy” policies are only just starting to bear the first of the bitter fruits of unanticipated consequences we expect for the state’s long-suffering electricity consumers, who are paying more for less reliable power. This is not how it was supposed to work, not in one of the world’s most advanced economies. What in the world is going on? Today, we outline what is going wrong in California as it suffers through one of the worst policy-induced mistakes I have seen in energy in my investment career. We also examine the investment opportunities that are likely to spring from fixing the mess by reflecting on a past ill-designed (but well-intentioned) “green energy” policy: the ethanol mandate of 2005. The takeaway? Think – and invest - carefully. Reality may end up being quite different from what is advertised and broadly expected.

“The nine most terrifying words in the English language are: I’m from the government, and I’m here to help.” – Ronald Reagan

Of all the unhelpful bad habits that the state of California could have learned from Wall Street, perhaps none is more calculatingly cynical than to dump bad news into the market on Friday night. It’s a clever tactic and rarely disappoints. Such timing is too late for the weekday news cycle, easily lost into the weekend, and old news come Monday. Hence, many of the most important – and unsavory - announcements make their way to market on Friday evening in the hopeful expectation that their remains will lie peacefully in an unmarked grave. This timing also helps to elude the attention of casual observers. Thankfully, our long experience has taught us whom to trust in the investment research business. We therefore have the watchful and talented team at Energy Income Partners to thank for alerting us to recent developments. In our opinion, this team’s research is a must read.

It was therefore with great interest that I read its analysis of one such press release about the blossoming power crisis in California. While the state’s Friday evening release of an eleven page “Proclamation of a State of Emergency” begins with all the usual suspects like climate change, drought conditions, extreme heat, and wildfires – my eye was drawn to text buried more deeply within the document to deal with what it describes as a 3,500-megawatt shortage of power. The measures to “fix” this shortfall of supply relative to demand include a promise to pay a lush 10x premium to existing prices to businesses that agree to get off the grid and switch to more polluting backup power generation! In retrospect, it seems, California made a mistake in its headlong rush to “clean energy” which included the premature shutdown of 9,000 megawatts of natural gas-powered electricity and soon-to-be implemented shutdown of the nuclear power plant at Diablo Canyon. California, a trailblazer in many ways, is demonstrating the dangers of a well-intentioned policy, poorly executed.

For us as investors there is also a somber reminder – the difficulty of figuring out the real winners and losers in the “energy transition” to “green energy.” Make no mistake, the bigger the problem, the bigger the solution. Remember too that it’s our mantra that we would rather be long the solution than short the problem. This is because society progresses by solving problems and one important job of the market is to fund such problem solving. So, the unfolding, misguided – and, sadly, self-inflicted train wreck of California’s power market is a rich vein for our research. The key is – and this is what we want to talk about today – the investment opportunity is probably not what you think it is. To help us frame this discussion, let’s take a few minutes to examine the last such ill-conceived but well-intended energy policy: the Bush Administration’s Energy Policy Act of 2005.

The policy above was instituted in a world of rising energy prices and energy insecurity. The government hit upon a seemingly ingenious plan - endorsed by most at the time – of subsidizing the production of ethanol from U.S. grown corn as a gasoline substitute. Investors roared their approval. Money flowed into the “obvious” winners, a new crop of publicly-traded ethanol companies, who seemingly would benefit the most from the government’s direct assistance. I remember well as many such companies sprang into public existence with lush margins and eye-popping returns on capital – and valuations to match. There were only two problems. First, that the ethanol hype thus created hit at a time when the price of corn was at a 200-year low versus the price of crude oil, to whose future the corn price was now linked. 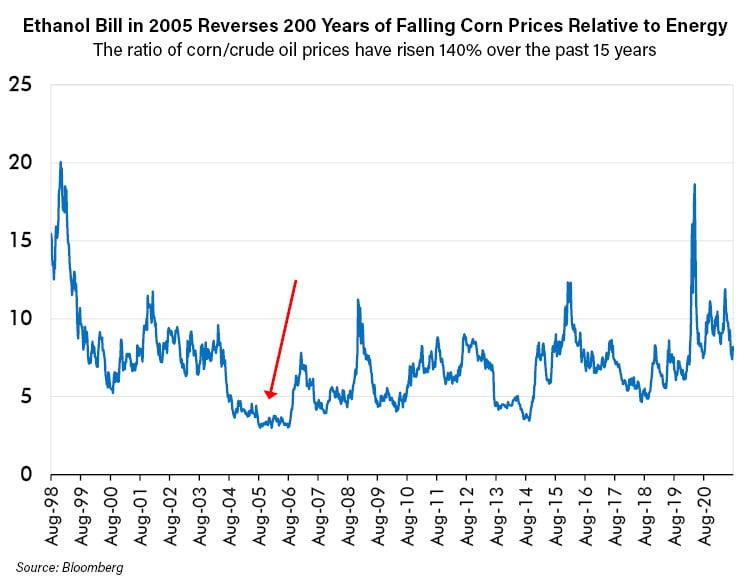 Because ethanol producers were short corn and long gasoline (so to speak), this meant that profits from ethanol production could only go down from this 200-year extreme – and down they went. Ethanol capacity soared taking with it the demand for corn, which raised its price from the unsustainably low $1.80/bushel to eventually more than $8.00/bushel. Second, the investing public’s burning desire for all things ethanol led it to wildly overpay for the few stocks then available. One of these, IPO’d to great fanfare in 2006 on the strength of its 200% return on capital, hit a peak valuation of nearly five times the replacement cost of its assets on its first day of trading, and then slouched predictably and inexorably into bankruptcy in the coming years as investors’ exuberance funded massive over-expansion. This was not the ethanol nirvana that investors were promised!

There was a way to invest successfully to profit from this policy, however.

Quietly, in a neglected corner of the stock market, a raging bull market was about to spring forth on the back of the unanticipated outcome of this policy change.

The biggest beneficiary of the policy change above was not the “obvious” ethanol stocks into which the public piled, but rather the humble fertilizer equities. These equities were in the prosaic business of plant nutrition, producing the nitrogen, phosphate, and potash that helped farmers grow more corn. These companies therefore solved a very important problem, the most profitable one solved in the entire cycle, in fact. The nutrient potash won the performance derby with a price that rose 5x in three years (see below) creating a windfall in profits for the handful of global producers, whose equity prices rose 4x or more in the coming years. Farmers weren’t thrilled by skyrocketing fertilizer prices, but $8.00 corn made up for a lot of sins. 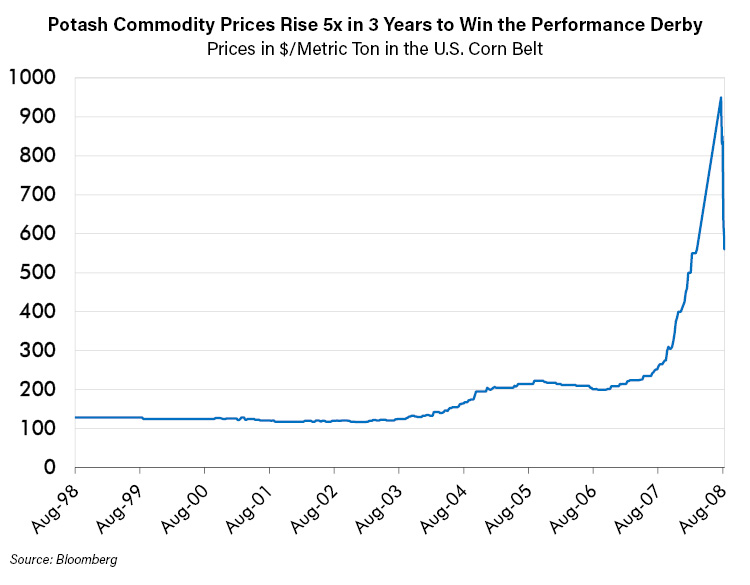 Don’t be fooled for a moment, however, into thinking that the Wall Street sharpies crushed the amateurs in these stocks. Far from it. In fact, some of the most respected minds on Wall Street were vocally – and exquisitely – wrong-footed by these equities and were short them in size during this parabolic move. My point here is this: think through all the angles – the obvious play may be the wrong one, even for the “experts.”

“If you have been playing poker for a half hour and you still don’t know who the patsy is, you’re the patsy.” – Warren Buffett

Our research team believes that the unfolding policy disaster now underway in the California power market may prove to be one of the most misguided policies to plague both consumers and energy investors since the 2005 ethanol bill, and that is saying something. Sadly, we also think that it may prove to be one of the more enduring due to the unquestioning dogma surrounding the “energy transition” to “green energy.” If we are right, the chaos that is mostly confined – for now – to California’s power market may spread nationwide and to other developed markets with far-reaching and multi-year implications. So, we believe that investors who do their homework will be amply rewarded for figuring out the real winners of this crisis. The real winners are often not the obvious ones. Our focus will remain squarely upon who is profitably solving this problem. We expect the answer may surprise most investors – but then again – isn’t that where the greatest potential profits lie?