Driving by Looking at the Rear-View Mirror

No thinking person who gets behind the wheel of a car would ever dream of navigating by looking in the rear-view mirror. Yet, it seems that is exactly how the U.S. Federal Reserve is trying to drive the economy right now. In doing so, the Fed may be endangering its remaining credibility and damaging the economy too, all at the same time. Why do we say this?  Because the yield curve is inverted.

You have probably heard about the inverted yield curve already, fear of it seems ever-present in today’s financial media. But has it been explained to your satisfaction? Commentators imply that its terrifying, but it appears they can’t really say why. In today’s research note, we outline our thinking that an inverted yield curve means two things: 1) the U.S. Federal Reserve is likely in the midst of a profound and far-reaching policy error and 2) the backward looking “data” about which the Fed is obsessing is likely to weaken in the future.

“You have to learn the rules of the game. And then you have to play better than anyone else.” – Albert Einstein

Before we dive too deeply into the weeds of this specific topic, it’s worth a few broader comments.  There’s a lot that you could say about why successful investing is so hard. You could say that it’s hard to make decisions based on incomplete information. And you would be right.

You could also say that investments’ prices are ultimately driven by an unknown and unknowable future. And there too you would be right. So how, then, does a thinking person attempt to invest intelligently? We believe the answer begins with a focus on risk management first, as our frequent readers should by now understand.

Thankfully investors don’t have to face an uncertain future alone. There are tools that can help. We believe that – along with a rigorous risk management focus – there are guiding principles of eternal truths that can inform our framework and direct our thinking. These frameworks are not, however, in the backward-looking language of the Fed “data dependent,” but rather are timeless in our opinion, as I explain below.

Principle Number One: The short-term, risk free interest rate on U.S. Treasury bills should not be the highest interest rate in the dollarized world.

An uncontroversial principle of investing is that investors seeking safety should accept lower risks for a lower return, and investors seeking to earn better returns should be willing to take more risks. The yields available on the shortest-term U.S. government debt are those most referred to as the return on the risk-free asset.  Greater risks that investors could take to earn higher returns come in many forms, as I explain below.

Just to name a few, examples of such risks that should lead to higher returns include 1) duration, the risk of loaning your money out for a longer period of time, 2) credit, the risk of loaning money to weaker quality debtors, 3) equity, which is after all just another form of credit risk, and 4) illiquidity, the risk of not being able to get your money back immediately.  Make no mistake: in investing, you take the risk first.  Any potential return you may earn comes only later – after you take the risk.

All the potential higher returns named above come from taking higher risks. Isn’t it logical to assume that investors would want to get compensated for taking those higher risks? Otherwise, after all, why not just own the risk-free asset and earn its lower, but safer, returns? This is where the problem lies today, in our inverted yield curve.

“No, no, no, you’re not thinking; you’re just being logical.” – Nils Bohr, the Father of Quantum Mechanics

To its looming discredit, the Fed has allowed the yield curve to invert. This is another way of saying that the highest potential yield investors can earn today is from investing in what is widely believed by many to be the least risky instrument in the world: short-dated U.S. government debt. Let me say this again clearly: the yield on the shortest dated U.S. Treasury obligations are ABOVE those on THIRTY YEAR U.S. government bonds held to maturity for this entire thirty-year period.

The chart below demonstrates how rare such an inverted curve is, numbering only 88 weeks out of the last 1,966 weeks or only 4.5% of the time cumulatively since 1982.  Each of these periods of curve inversion preceded subsequent recessions.  In some cases, this inversion took place immediately before a recession, such as in 2000, or several months in advance such as in mid-2006 and again in mid-1989. 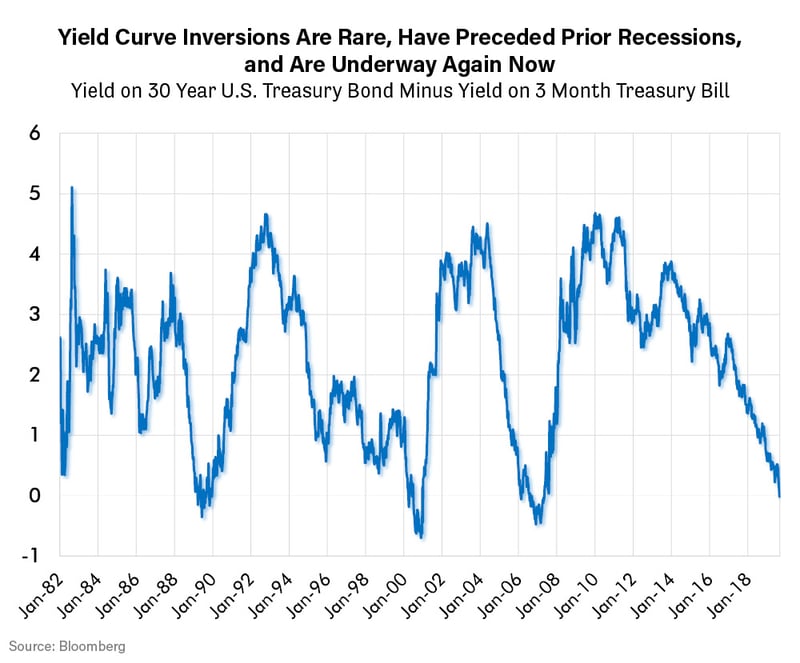 The point of the chart above is that an inverted yield curve is rare and troubling.  An inverted curve flies in the face of the foundational principle outlined earlier, that the lowest returns should come from the least risky assets and the highest returns from those where investors must take more risk to earn their higher returns.  The chart above suggests that prior yield curve inversions were reasonable times when prudent investors could begin to anticipate rising market stress, even if this stress didn’t take place immediately.

My point is that an inverted yield curve is an affront to the principle of compensated risk taking.  That’s why we think it is suggestive of future problems.  Here is where the future blows of the Fed’s critics will fall the hardest.  Inexplicably, the Fed appears to be ignoring this timeless principle, and past warning, in allowing this yield curve inversion to persist.  The Fed is touting the merits of its “data dependent” model, but isn’t this nothing more than driving by looking at the rear-view mirror?  Has the Fed not learned by now that the market is not data dependent!?  The market is forward looking!  The market anticipates!  And possibly no single measure of the market is more anticipatory than the yield curve.

This is why investing is so hard, because – in my experience - you can’t wait for the data.  Why?  Because by the time that you see the data, everyone else should see that data too, which makes it logical to count on the fact that the data may already be priced into the market.  Every rookie investor glued to CNBC should know this, why doesn’t the Fed?  While the data remains uncertain, the Fed has the chance to be a force for good in the markets, because it has a freedom of action that will be denied it – once the data is clear.  If the Fed loses that initiative however, the risk rises that the Fed gets revealed for what it appears to be – a committee of economists trying to do the impossible, which is to set the price of money.  So here, my point is that the abomination of an inverted yield curve suggests problems in capital allocation in many markets, although the exact nature of the problem and how it may play out will remain elusive to us trapped in the present.

Principle Number Two:  Investing is About the Intelligent Management of Risk in an Uncertain World

The Fed seems to believe that somehow it will see the data first and be the first to react to that data.  If this were true, it would represent that rarest of market creatures, the risk-free arbitrage of buying what is obviously two dollars of value for just one dollar.  This would be the equivalent of promising a perpetual motion machine of market profits.

Now let me be clear, the very premise of research driven investing like ours is to attempt to buy two dollars of value for one dollar, but that effort is fraught with risk and uncertainty, and is never – ever – risk free, although we make every attempt we can to limit the risks we do take.  Even when done successfully, it’s a messy process that may take years.  I hope that our long-term readers have seen and understood our deep humility when we write about the difficulty of successful investing.  We know how hard it is, so we respect it.  Why doesn’t the Fed seem to?

As it stands now, the Fed seems to have boxed itself into an intellectual corner where it can’t move until it sees in the data proof that it should move.  This could be a deadly error to make in the midst of a forward-looking market.  I fear that the Fed’s inaction now is only the most obvious of its intellectual conceits, a failing it may come to rue once “the data” turns negative.  But it is the markets, and the future that the markets anticipate, that will potentially be the ones to reveal the full brunt of the Fed’s apparent error.

So, when you hear the Fed talking about being “data dependent,” recognize it for what we believe it is: the Fed’s terribly flawed practice of driving by looking in the rear view mirror.  What I described above explains why the model you should expect to see in a normally functioning market is the lowest yields in the shortest term, least risky asset – in this case short-dated U.S. government bonds.  When market prices deviate from this framework, as they are doing now – and just as they did in advance of prior cyclical peaks in 2000 and 2007 - it’s a warning that something is amiss somewhere; that things are not as they should be.

I have been doing this long enough to have lost, long ago, the conceit that I have all the answers.  I know, and our whole research team knows, that we won’t see everything coming.  This means to us that market prices will likely move ahead of observable fundamentals, the “data” about which the Fed obsesses, to price in the future before that future becomes clear.  This is why we must constantly act on less than complete information.  It’s also why we believe that any thoughtful attempt to earn returns always begins with risk management.

Now, with the benefit of decades of investing behind me, I believe that I have a framework that I trust.  Right now, that framework is telling me that all is not right with the world, otherwise the yield curve would not be inverted.  In our portfolios, we have taken – in advance of the data - what we believe are prudent risk management steps to prepare for a world of growing uncertainty.  We do this not because we can see the future, but because we can’t.  The markets taught us long ago the futility of trying to drive by looking in the rear-view mirror, but thankfully we still have helpful tools and frameworks that can guide our investing in an uncertain world.