Everybody Has a Plan 'Til They Get Punched in the Face

Mike Tyson says that everybody has a plan until they get punched in the face. That’s when life gets real and many plans fail. Volatile markets just punched many investors in the face. Do they have a plan? Do you? How is your plan working? Today we discuss our plan and the evidence our clients can see in their accounts for how well its working. A key tenet of our thinking, that is proving helpful in these markets, is to seek to find a way to benefit from volatile markets. We believe this is a superior form of risk management than hiding in cash. 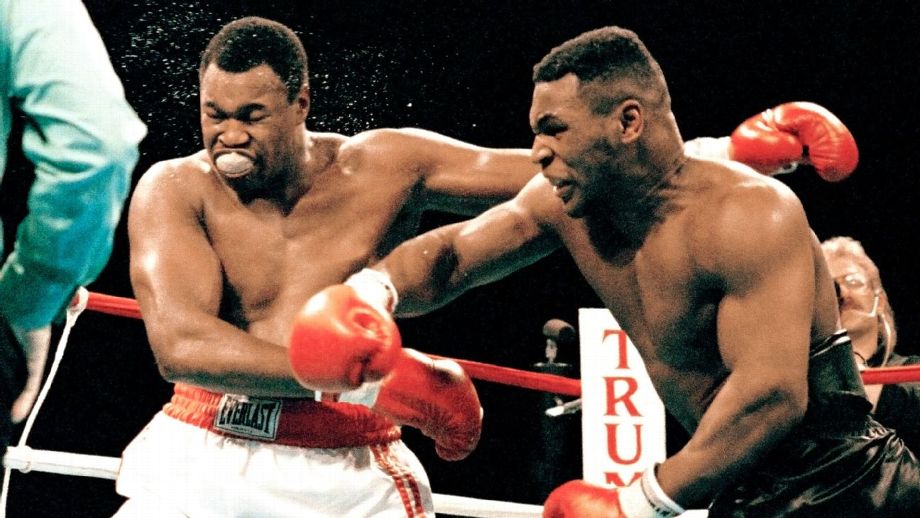 “Everybody has a plan ‘til they get punched in the face.” – Mike Tyson

Mike Tyson, pictured above to the right, dominated heavyweight boxing in the 1980s and 1990s.  Out of his first twenty-eight fights, he won twenty-six of them through knock-outs or technical knockouts.  He was the youngest heavyweight champion ever at the age of twenty. He was also the first heavyweight to earn the championship belt for all three major boxing leagues. Tyson was known and feared for his powerful punches, which punished his foes in the ring.

Many investors may feel like the market just punched them in the face. In just four trading days, the S&P 500 fell 7%. The S&P 500 has stabilized in recent days and is only down 3% from its all-time high.  But emotion in the markets appears to be running high in part due to powerful moves in many assets that have proven their defensiveness in the past, such as gold and longer-dated U.S. government bonds.

In just the last three weeks, these traditionally defensive assets have enjoyed significant price appreciation – right as equities collapsed.  Gold is up 6.6% from its lows of July 26th, while the U.S. government thirty-year bond, often considered a “widows and orphans” investment, has rallied even more by 12.7%. These moves are only the latest in the recent powerful upcycle for these assets.  For instance, the long-term government bond that began trading last November has rocketed 30% while gold is up 23% over the same period. Looking at these powerful returns in gold and the bond, I can understand why many equity investors are unsettled.  What’s going on here?

Long time readers of this publication know we believe that - if your goal is to earn the best returns while taking the least risk - you should be willing to move early, ahead of the news. We also believe that rising volatility should not be a surprise.  After all, we are now very deep into the oldest business cycle in post-World War II history.  We have literally not seen a longer business cycle in more than seventy years.  Isn’t it reasonable to plan for its end? But how best to do that? That’s what we want to talk about today.

“The intelligent investor is a realist who sells to optimists and buys from pessimists.”  – Benjamin Graham, the Father of Value Investing 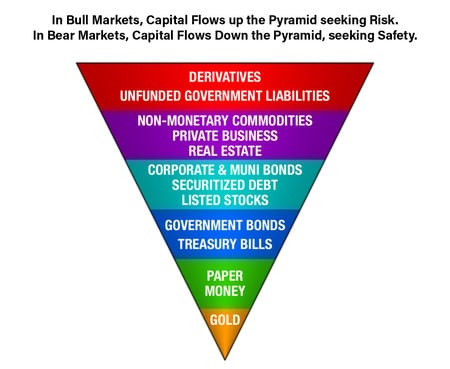 We seek to follow Graham’s advice.  Our goal is to sell to optimists and buy from pessimists. Exactly how we try to do that can be explained by John Exter’s “inverted pyramid.” This pyramid, shown right, displays his framework for the markets. At the pyramid’s inverted apex is gold, which has neither default nor counterparty risk, explaining why for centuries gold was the reserve asset backing banks and global trade. As you move higher up the pyramid, assets tend to become more risky and larger than the more rare, safer assets below.

Assets lower in the pyramid, such as bonds, have a more senior claim on assets and cash flows. These lower risks typically offer investors lower returns, as one would expect. Government bonds traditionally are viewed as the least risky, followed by higher levels of risk (and returns) associated with corporate and muni bonds.  Equities are above bonds on the pyramid, suggesting they offer potentially more upside but are riskier. The simple idea here – over the long run – is that risk and return go together. The greater the risk, the greater the potential reward – not a controversial concept. However, our late cycle investment plan seeks the magical combination of more return with less risk. We believe that Exter’s pyramid describes how this can be possible.

Returns can change quickly in the pyramid when investors’ appetite for risk changes. Typically, during times when investors begin to seek safety, money flows down the pyramid, which can shrink the value of riskier assets and raise the value of assets with less risk. A few of these less risky assets, such as gold and longer dated U.S. Treasury bonds, can appreciate in price from the crush of money seeking safety in them as the demand for them rises. Such rare and valuable diversification can be a wonderful addition to a portfolio. The pattern of these asset’s returns adds welcome ballast to a late cycle portfolio, as the chart below illustrates.

Once you understand Exter’s pyramid, you can see how to profit from less risky assets when investors lose confidence in riskier assets. For example, note the sharp moves lower from the equity peaks in 2000 and 2007 and – so far – from September 2018 as equities began to underperform gold and U.S. Treasuries.

The best profits, of course, come from buying low and selling high. This means buying low the less risky asset while investors are still taking risks higher up the pyramid. The goal is then to sell high, by selling your newly appreciated less risky asset to the desperate investor seeking to reduce risk panicking out of equities.

If we had a crystal ball, we would wait for the day of the market peak and sell then. Sadly, we have no such crystal ball. I don’t think anyone else has one either. This is why we must be prepared to move early, ahead of the news. Thankfully, however, we have learned a few tricks in the last twenty years that, we believe, can help stack the odds in our favor. One such trick is the leading indicator shown below which has been a useful guide to when such a turn in risk-taking appetite may be underway.

The blue line below is from the Eurodollar futures market that forecasts the future three-month LIBOR interest rate. To many investors, this rate is one of the most important prices in the world because it determines the cost of funds for trillions of dollars of global debt. It peaked in September of 2018.  Was this an important inflection? Only time will tell. However, so far, the peak and decline of this expected interest rate marked an abrupt change in the pattern of returns between equities, treasury bonds, and gold – just as Exter’s pyramid would have suggested, to the benefit of those who own the less risky assets. 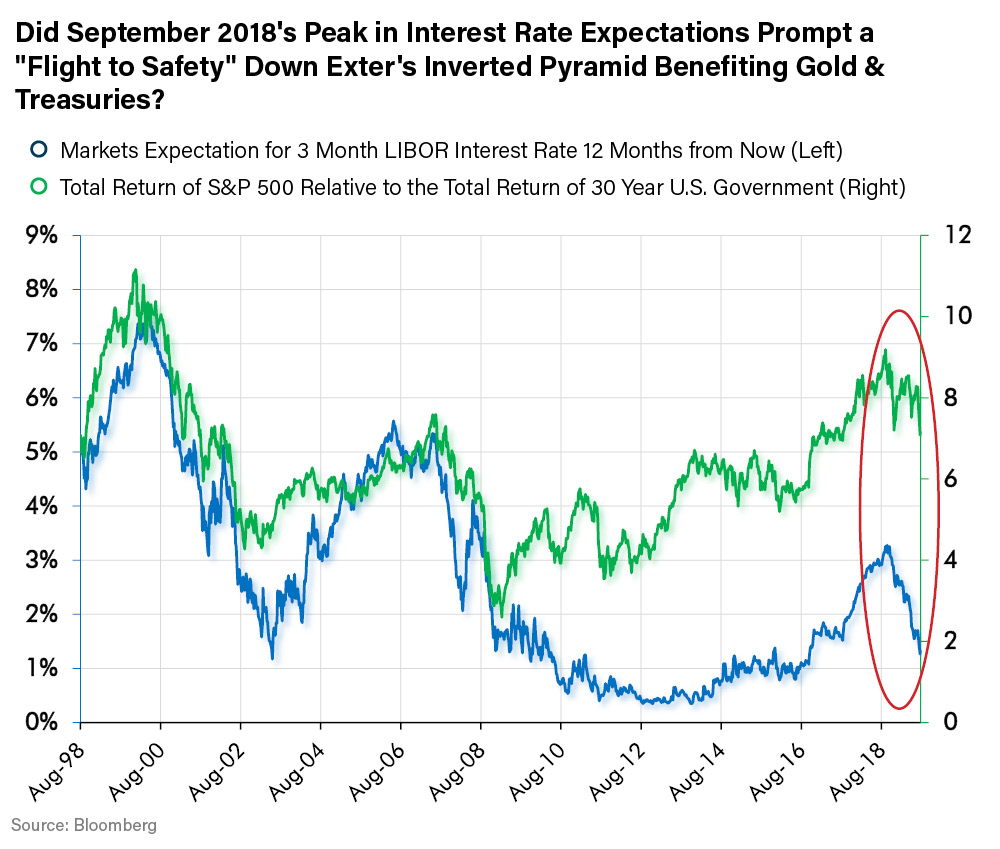 “What everyone else knows is not worth knowing.” – Gerald Loeb

For the reasons above, we have chosen to meaningfully de-risk our portfolios over the past year and to raise exposure to the kinds of assets that Exter’s pyramid suggests could appreciate as investors de-risk.  Our most conservative model portfolio now has the lowest beta-adjusted exposure (0.63) to the market in our firm’s history. This measure of risk suggests that this 100% equity portfolio is taking 37% less risk than the S&P 500.  We achieved this lower beta-adjusted risk through our select investments in gold related equities, consumer staple companies, mortgage REITs, and companies that benefit from credit distress. Furthermore, within bonds our model portfolios have favored U.S. Treasuries and other higher quality, longer duration bonds.  Finally, we believe that now is the time when select alternative investments can offer more tools for better risk management to diversify portfolios.

We suggest that, if long-term investment success is your goal, you need to have a plan.  And not just any plan, but one that we believe keeps working after you get punched in the face.

Exter’s inverted pyramid explains how we try to identify investments that can appreciate even while risk appetite falls.  The recent strong performance of assets lower in the pyramid, gold and U.S. Treasury bonds, suggests that investors are discovering the value in these investments.  Perhaps it is later in this cycle than many think?

We heeded our own counsel to panic early and beat the rush. We believe that our plan is working. How about yours?