Get Long the Hurricane

In my opinion, the single toughest challenge in investing is to creatively think about risk management. We seek to balance our goals for long-term growth with the risks we face on that journey through the markets.  The best tools are those that can help a portfolio prosper even in the most challenging and “unexpected” of environments.  Such an investment in thoughtfulness may seem un-necessary for years, until the day when it makes all the difference in the world.

One of the little-known aspects of being a professional investor is that you are always thinking about investing.  You can’t get your mind off it. Ever. Even if you wanted to. Maybe the most useful part of living with this curse is that, with enough time and effort, you can find a way to learn an investment insight from almost any experience.  I had such an experience during Hurricane Isabel in 2003. 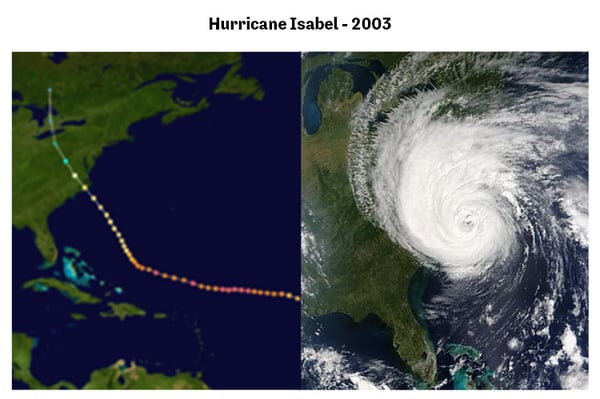 It was September of that year. I was just outside Auckland, New Zealand on the way home from a research trip touring the iron ore mines of Australia. I had spent the week on the hunt for the biggest winners of what I believed would be a powerful commodity cycle. In the blood red sands of the iron ore ranges of Western Australia I had found yet another example of the proof I sought. So though dead tired from the schedule and jet lag, I was content.

From a hillside restaurant on Waiheke Island, I helplessly watched Isabel, a killer category 5 hurricane, threaten the East coast of the United States, far too close for comfort to my home on the Eastern Shore of Maryland’s Chesapeake Bay. The beauty of Waiheke was lost on me, trapped thousands of miles away from Isabel’s swirling menace. The flight home seemed a lot longer than the thirteen-hour flying time printed on my boarding pass.

Tension drained out of me when I finally got home to Maryland to look after my wife and our young son.  During my transit, Isabel had weakened to a seemingly much less intimidating Category 2 Hurricane.  Furthermore, it was thankfully on track to pass by us to the South. We had dodged a bullet, or so it seemed. I rested better that night than I had a right to expect given my body’s clock was still on Brisbane time, 14 hours ahead.

Isabel’s weakening and southward-bending track were welcome news for our bayfront home. To my relief the forecasted storm surge had been reduced to two feet, no more than a high tide really, and certainly nothing to worry about with our house on some of the highest land on Kent Island. At midnight the storm surge would strike us, which ominously enough coincided with the peak of high tide.  Jetlag had scrambled my internal clock anyway, so why not just stay up? I could watch the storm surge crest with the tide at midnight and recede before calling it a night.  This seemed like a good idea at the time, which can be said of most bad ideas viewed in retrospect.

“The White Sea folk say of the tide, the water reconsiders, meaning the moment just before it begins to fall.” – Aleksandr Solzhenitsyn

Standing in my backyard on the shores of the Chesapeake, I was slowly un-nerved by the approaching storm surge. This was not what I had expected.

Eerily silent, bright blue flashes across the Bay on the mainland erupted from the explosions of flooded power transformers. They failed and darkened the lights of Annapolis, a fate confirmed by the trailing boom that followed. This wouldn’t happen from a two-foot storm surge. Maybe my confidence in the expert forecast was misplaced?

Desperate hope soured into fear as the water ignored midnight’s peak high tide and continued to advance.  Slowly, almost imperceptibly, the water overcame my dock, which disappeared under the waves. That’s something you don’t see every day. Now, the storm surge had to be at least four feet, twice as bad as forecast.

Midnight’s peak of high tide came and went. Still the water rose. I had not expected that. Near 2:00 a.m., despite what had to be a falling tide, water crept over the rocks of our rip-wrap. Five feet high now. Spilling into our back yard, the pitiless surge was up to six feet by 3:00 a.m. Only a few feet of ground in my backyard stood between the surge and my home. At 4:00 a.m. the surge was up to seven feet.  In water up to my knees, in my backyard, I lost it. I experienced the intensity of pure regret only known to those fools that didn’t buy flood insurance when they could have.

I forego the chance to buy flood insurance. Hilarity does not ensue.

Over the years I had tried, three times, to convince my insurance broker that I really wanted to spend the $400 to insure my waterfront home against flood. I knew that my house’s elevation was so high that it was not even in the flood zone. But still, after all, I was a professional investment analyst and was paid to consider and intelligently manage the risks of my investments. What was $400 relative to the cost of my waterfront home?

But to my bitter regret I had allowed the insurance agent to talk me out of it. The clincher was when he told me “Look, I will take your money. But I have lived on the Bay for thirty years, and there has never been a storm surge high enough to come close to touching your house.” That was a true statement. My house was on some of the highest land on Kent Island, eight feet above sea level.

Now, at 4:00 a.m., in water up to my knees in my backyard, I thought “How much would I pay right now, if someone would make me an offer to insure my house? $10,000, $25,000?” Unbidden, my brain went into investment mode, analyzing my dilemma as an investment problem: what was the trade?

Long a House, Short a Hurricane

I had exactly the wrong trade on. I was long a house and short a hurricane. If I had only bought flood insurance, I could have hedged out (flattened) the risk from my house long through writing a check to the insurance company. Then the insurance company, not me, would be wearing the risk of my house long. But, if you can’t flatten out your house long, what is the trade? What do you do when the storm is upon you? The obvious answer that struck me was to find a way to get long the hurricane - in size.  In this manner, even if the worst happens and the hurricane wipes out your house, you can still come out ahead. I never forgot that insight. With a little creativity, you can profit from that which would otherwise destroy you. Unfortunately, in the middle of the night, I couldn’t put that trade on either. I could only ride out the hurricane.

However, when the Global Financial Crisis struck years later, I realized that I was threatened by the same poor trade structure. After all, my livelihood came from the financial markets, and I could see the hurricane bearing down and threatening my ability to earn a living. I needed a solution. What was the trade? Get long the hurricane. And so, I did.

Long-time readers will be familiar with our philosophy that there are better ways to hedge a portfolio than “going to cash.” As our example today suggests, such a strategy works best when we panic early and beat the rush!  Insurance can be the cheapest when the prospect for loss seems most remote. But our strategy is not, thankfully, dependent upon perfect timing. In fact, we think the best hedges are those that “get long the solution,” that can benefit from the challenging times that other investors rightly fear – hedges that pay us to wait while we own them. A trade structure that pays you to wait can be an ideal structure, because your timing doesn’t have to be perfect.

Examples of ways to get long the hurricane include longer-dated U.S. Treasury bonds and gold-related investments. My experience is that, once the hurricane arrives, many are as unprepared as I was in my backyard. Certainly, prevailing prices for the best hedges may then be far higher, bid up dramatically as less prepared investors seek them out in a panic. This can be a wondrous opportunity for those who already own those hedges!

I remember the desperation I felt during Hurricane Isabel, caught painfully unhedged in water up to my knees in my backyard. And the regret of not planning ahead. Never again I vowed, would I leave something so important to luck. With Isabel, I was lucky. Despite surrounding my house on three sides, the water would not flood my house. It was close though. Another three inches would have done it.

After years of reflecting upon this lesson, I think I have learned a better way forward. I can anticipate the fate that awaits overconfident investors when, after the many long years of this bull market cycle, so many investors have neglected risk management. Once I made the mistake of thinking that way too.

Our research team believes that creative thinking and astute analysis can identify investments that may prosper even in the most challenging and “unexpected” environments. I have learned that the key is to think ahead and be willing to act early. And that creative trade structuring can be the most powerful tool – if you know how to use it. These investments in thoughtfulness may seem un-necessary for years, until the one day when it can make all the difference in the world.