Once you identify a great investment idea, the most important thing you can do is to remain patient.

Learning from the Best - Jack Laporte. A Great Investor and Wonderful Person 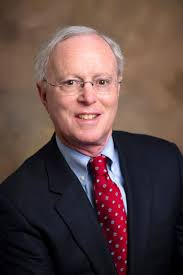 Jack was the son of an accountant and a homemaker.  An excellent student, he was class president at Princeton and earned his MBA from Harvard in 1969.  He joined T. Rowe Price in 1976.

Morningstar named him mutual fund manager of the year in 1996. Imagine all the events during which Jack invested.  He began running the fund before the 1987 Crash, continued through the Internet Bubble and subsequent bust, and the Global Financial Crisis.  So Jack had seen a lot and reached a few important conclusions about what he thought was the best way to invest.  Judging by his marked outperformance, his opinions were valuable.

Jack’s ability to hold an investment patiently is what really set him apart.  He held his small cap growth investments on average for four years.  This is an eternity in a world where his competitors held their investments for less than one year.  It never made any sense to him why his competitors were so hyper-active.  But his patience didn’t come easily.  It came at a cost.  Sadly, our most important lessons in the market never seem to come cheaply, do they?

I remember a story Jack told me once, about the biggest investment mistake he ever made.  It may surprise you to learn that his biggest mistake was not something that he owned that he shouldn’t have, but rather an investment that he sold too soon, for the wrong reasons.

Jack explained to me that he bought Starbucks (SBUX) when it was first offered to the public in 1992.  Talk about getting in early!  He thought Starbucks had a lot of headroom for growth as it expanded nationwide.  He owned the stock profitably for about two years but sold it when he became concerned that rising coffee prices could temporarily weigh upon the company’s profitability.  This concern was valid, and after he sold the stock it traded sideways for about two and a half years. 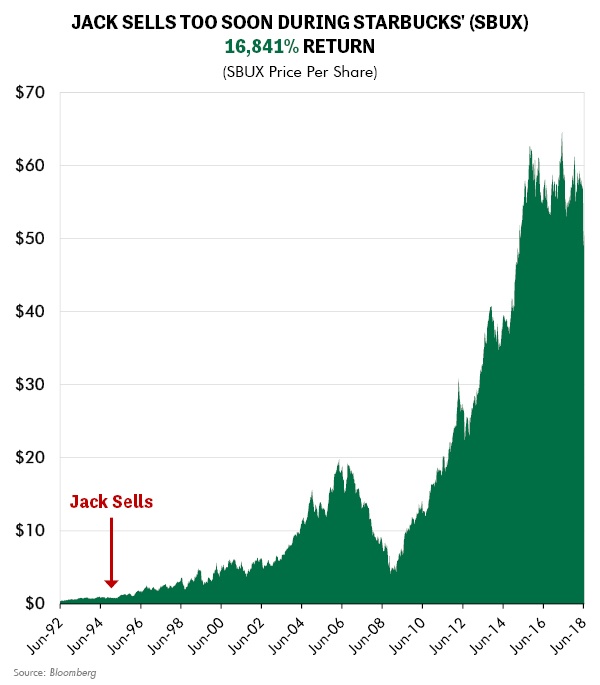 Starbucks would go on to rally a total of 16,481% from when it went public.  That’s a return of 21.68% per year, enough to turn a $10,000 investment into $1,648,000.  So even though he “made money” on his investment, Jack still learned a painful lesson about the importance of not selling a great growth company too soon.  Jack figured that selling too early cost his fund about $200 million in foregone profits.  This amount was greater and more meaningful to him than any loss he suffered by owning the wrong security.

We have liked the prospects for the convenience store industry for many years now.  We own or have owned both equities and bonds of many companies in the industry.  Its many excellent investment merits make it one of our favorite industries, ever, among the hundreds that we have studied.

The market recently has not shared our enthusiasm.  In fact, the stocks of best-in-class operators Casey General Stores (CASY) and Alimentation Couche Tarde (ANCUF) have gone nowhere for three years.  Has something permanently changed in the investment outlook for these companies or is this simply a three-year hiatus on their road to glory?

We have an optimistic outlook on convenience store investments for many reasons.  First, understand that they monetize human laziness.  If there is one investment theme in which I am confident, it's human laziness.

I am Bullish on Human Laziness

A question: when filling your gas tank, have you ever stepped inside a convenience store to buy an unbranded gallon of milk at a premium price?  Assuming you even checked the price that is.  Your time is worth something, and the grocery store is miles away.  Easier just to grab your milk and go.  And maybe a fresh donut too while you’re at it.  If this describes you, then your laziness works to their profit, and those that own the stocks.

Furthermore, companies in this industry can grow with limited capital needs because they have a “negative cash conversion cycle.”  This means that they sell their inventory before paying their suppliers for it, thus the suppliers essentially finance them through short-term interest-free loans.  So suppliers pay to help convenience stores grow.  This is a huge and poorly understood positive for these stocks.

Inside Store Sales are Where it’s At

While you may stop at a convenience store to fill up your gas tank, the most interesting economics take place inside the store.  Both CASY and ANCUF have reached the conclusion, quite correctly in our view, that fresh foods and other higher margin goodies are a big part of an even brighter future.

CASY in particular has perfected this strategy with 80% of its stores in towns with less than 20,000 people.  Borrowing a trick from Walmart’s early growth, its stores are basically the nicest restaurant in town.  Its fresh donuts or pizzas are irresistible, small, every day luxuries.  This is the reason why inside store sales for the convenience store industry have never printed a down year.  This remarkable record includes the ’73-74 oil shock, the 2000 Technology Bust, and even the Global Financial Crisis.

Add CASY’s 25% return on equity (earning 25 cents for every dollar invested in the business) to that recession-resistant business model and nationwide room for expansion and you have the characteristics of a stock that we believe is worth owning patiently for many years.  Is it any wonder that since 1984 the stock has returned 15.6% annualized?  This is a remarkable business, even if the stock has gone nowhere for three years.

Alimentation Couche Tarde (ANCUF), which goes to market as Circle K, is one of the largest publicly traded stocks in Canada and has even more ways to profit because it is the industry’s primary consolidator.  It has grown via acquisition to be the second largest owner of convenience stores in the highly fragmented US market.  No one runs a leaner store with a higher return on equity than Couche Tarde.  The company has grown from a single store in Quebec to 13,000 stores globally.  This growth has powered an incredible return of 45,852% or a 30.4% growth rate for twenty-two years, enough to turn $10,000 into $3.43 million.

Consolidation is Likely to Be a Long Tailwind

Bigger is better in this consolidating business.  And it should consolidate for at least another generation with 100,000 convenience stores in the U.S. alone.  Below you can see how fragmented the sector remains.  In my experience, industry economics get better as industries consolidate.  I believe that this future awaits convenience stores too. 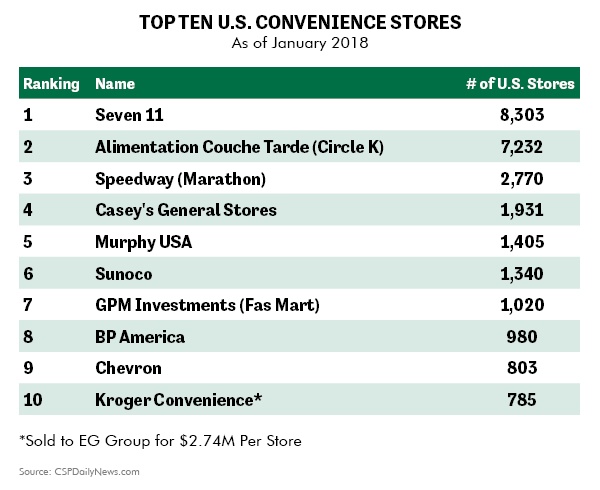 Furthermore, there is a simple reason I believe vertically integrated oil companies remain at a structural disadvantage: quality of management and long-term incentives for success.  The way to the top of a big oil company like BP or Chevron is not selling Twinkies, rather its poking expensive holes in the ground drilling for oil or running some multi-billion-dollar chemical complex.  To their credit, these bigger integrated oil companies seem to realize this trend and are getting out of running their retail outlets.  I expect this to continue.

The Price is Right

I find the valuation of CASY and ANCUF in particular to be un-demanding.  CASY trades at a single digit multiple of its operating cash flow and would be valued 50% higher should it command the same price per store for which Kroger recently sold its stores to EG Group.  I expect CASY to execute appropriately or get swallowed up at a premium in industry consolidation.  ANCUF’s earnings continue to rise while the stock has been flat, valuing the shares at 14x consensus earnings estimates for next year, a remarkable discount for a stock with a track record of growing 30% per year.

I think the convenience store industry has remarkable prospects.  I have held this view for years despite enduring what is now the third year in a row of weak performance.  I wanted to write you these lines so that you would understand why I am OK with that.

In my twenty years in this business I have learned that it’s a humbling task to risk capital in the markets.  I suppose that this has informed my view on what is within the craft of man to achieve in a very limited time frame, and what can only be achieved with patience.  Therefore, we may often hold our investments even longer than Jack!

I think Jack was right that it’s difficult to identify investments with excellent growth prospects that can work for many years for reasons that we can reasonably anticipate and believe will be sustained.  These rare securities, once found, should be held with almost infinite patience.  I believe that Jack was right in another way too: the biggest mistake investors can make is not owning the wrong thing, but rather being too short-sighted and missing the profits that can come from owning truly superior businesses for the long run. •

"Jack was one of the great investors of our era, and you never heard that from him. He never talked about it. He was a modest, cultural pillar of our company and a true gentleman."
- Brian Rogers, Chairman and Chief Investment Office of T. Rowe Price

"Finding true growth companies is not an easy task. But when we're fortunate enough to find companies that have the potential to grow their earnings at well-above-average rates for five to 10 years or even more, the thing that distinguishes a great growth investor is having the steel will not to trade out of those winning investments too soon."
- Jack Laporte

"The two most powerful warriors are patience and time."
- Tolstoy

“If we are facing the right direction, all we have to do is keep on walking.”
– Buddhist Proverb

“Let your winners run, and let the compounding of earnings growth work in your favor. The real way for investors to make money is to find outstanding companies and own them a long time.”
– Jack Laporte

“Patience is bitter, but its fruit is sweet.”
– Rousseau

“The job he [Mr. Laporte] has done with New Horizons, he should be manager of the decade.”
– Bill Miller (Mr. Miller’s performance beat that of the S&P 500 for 15 years in a row)