Submerging Markets Got You Down? Reflexivity Explains Why

I believe investors can better understand the events underway in emerging markets if they study George Soros’ principle of “reflexivity.”  I believe that this rare but powerful force is at work right now and threatens to make a bad situation worse.

One goal of this publication is to share with our clients and friends what we are seeing and thinking.  Often this means sharing the insights of famous investors and how they influence our research.  Our hope is that investors can apply this knowledge to more skillfully navigate and understand challenging markets.  With powerful – but so far isolated – financial damage underway in emerging markets, it’s an excellent time to study George Soros’ principle of “reflexivity.” 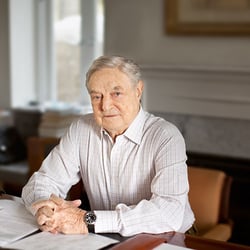 No study of investment genius would be complete without including George Soros.  While Soros has become a controversial figure in the political world, his achievements in the financial world cannot be questioned.  His performance track record is, amazingly, superior even to that of Warren Buffett, the legendary “Oracle of Omaha.”  Soros did so with a wide-ranging investment program, encompassing everything from stocks to bonds, currencies to commodities, both long and short.  Soros was one of the first, and clearly the best, of the “macro” hedge funds.

I have studied Soros’ published works, including his many books, for years.  The most important of these is his 1988 “Alchemy of Finance.” This thoughtful book has powerful lessons but it is challenging to understand. I had to read it three times to be sure I understood its message!   It was worth it.  I have reread it many times since.

In my opinion, the principle of reflexivity is the most powerful insight that Soros has shared.  Reflexivity is his word for the feedback loop that results in markets as participants value a security today and, in doing so, impact future fundamental results.

Soros explains below that the flawed perceptions of participants can act upon the future in the markets.  In rare occasions, this force creates an especially powerful feedback loop driving prices “far from equilibrium” resulting in bubbles and spectacular crashes.  Students of the 2007 U.S. housing bubble and subsequent crash should recognize the dynamic that Soros describes below, when he wrote about it thirty years before it happened in “Alchemy of Finance:”

The simplest case is a real estate boom. The trend that precipitates it is easy credit; the misconception is that the value of the collateral is independent of the availability of credit. As a matter of fact, the relationship is reflexive. When credit becomes cheaper and more easily available, activity picks up and real estate values rise. There are fewer defaults, credit performance improves, and lending standards are relaxed. So, at the height of the boom, the amount of credit involved is at its maximum and a reversal [from rising credit availability to falling] precipitates forced liquidation, depressing real estate values. Amazingly, the misconception continues to recur in various guises.

I attribute most of my investing results during the Global Financial Crisis to the application of reflexivity, because it helped me understand that while the boom was yet underway, the eventual downtrend could become catastrophic.  What is more important for us in today’s markets, however, is the application of reflexivity to the nascent meltdown underway in emerging markets.  Before we dive into that, however, we must quickly outline the role of misplaced conviction among consensus opinion to winning big in reflexive markets.

One example: I will never forget the eye-rolling look I got from an experienced options market-maker during the Global Financial Crisis.  He had overheard me on the trading desk pay a very high price for a deeply out of the money put option on a troubled financial equity.  I believed it was trapped in the vortex of a reflexive death spiral and that the market was mispricing this disastrous outcome.  Owning a put option would pay off substantially if I was correct and limit my losses if I was wrong.  Accordingly, I paid an implied volatility of 230 for the put, basically 10 times the price of average long-term volatility.  There was clearly a lot of negativity already priced into this troubled equity.

So, it was with thinly-veiled distaste at my rank amateurism that he lectured me about the mathematical impossibility of making money after paying such a high price.  After the stock was essentially nationalized days later, shocking nearly everyone, implied volatility shot to 800.  Reflexivity was indeed at work.

Soros has specifically identified emerging market debts and currencies as reflexive.  It’s easy to see why.  The core of the problem revolves around the mismatch between local currency values and a country’s borrowings in foreign currencies, such as U.S. dollars.  The act of loaning a growing amount of U.S. dollar debt to a country initially improves that country’s fundamentals.  This “improvement” encourages more U.S. dollar lending, especially when interest rates are low back home and savers who are desperate for more income place their capital at unwise risks in peripheral economies.

This virtuous cycle can become a vicious one once incremental U.S. dollar lending dries up, such as after an inflection in credit quality back home.  Investors discover too late, as Soros notes, that their bonds’ collateral values were buoyed by abundant lending which collapse when credit decelerates.  As debtors scramble to refinance, capital flight may depress local currencies relative to the dollar, raising local interest rates and lowering bond prices, which further depress collateral values and economic “fundamentals.”  Often the local authorities may attempt to further raise interest rates, in the hope of stabilizing currency values and restarting investment, only to have higher rates hurt the economy.  For further study of historic examples, you could examine this principle at work in the Asian Crisis, the 2002 collapse of Argentina, and – I believe - the ongoing problems in both Argentina and Turkey, as the charts below suggest.

I believe that the unfolding weakness in many emerging markets is one of those rare instances of reflexivity’s power.  However, just because something can be reflexive, doesn’t mean that it will be reflexive.  Frankly, most such potential occurrences abort before they reach the wildest stage of self-reinforcement.  That’s why strongly reflexive markets are rare.  Yes, they have small odds, but they also bring with them high severity which can drive powerful outcomes. These are often called “Black Swans” because they have low odds but a high expected value.

Investors should regard with caution any attempt by consensus, blind to reflexivity, to blithely dismiss the potential severity of unfolding emerging market weakness.  After the crisis has passed, long term investors may prudently expect to find extraordinary values once these forces are spent. We are open to a marked deceleration in emerging market asset prices before a final, buyable low. We will be paying close attention!

“Four hundred seventy-three million to one. Those are the odds against George Soros compiling the investment record he did as manager of the Quantum Fund from 1968 through 1993."

"It takes courage to be a pig."

“In social systems fallible human beings are not merely scientific observers but also active participants in the system themselves. That is what makes social systems reflexive…markets also have an active role: they can affect the future earnings they are supposed to reflect.”

“Market prices of financial assets do not accurately reflect their fundamental value because they do not even aim to do so. Prices reflect market participants’ expectations of future market prices.”

“Self-reinforcing/self-defeating cycles like the conglomerate boom [1960s] and the REITs [1970s] do not occur every day. There are long fallow periods when the specialist in such cycles remains unemployed. He need not starve, however. The divergence between underlying trends and investor recognition persists at all times and the astute investor can take advantage of it.”

“Markets are constantly in a state of uncertainty and flux, and money is made by discounting the obvious and betting on the unexpected.”