Up the Escalator, Down the Elevator

The lightning fast 30% collapse in crude oil in recent days is a stark reminder of one market truism: markets go up the escalator and down the elevator.  If your goal is to avoid being a victim of the cycle, our experience is that the best strategy is to be proactive and willing to move early.  These are the principles that guide our risk management that we have learned through hard experience over many years and cycles.

"What has been will be again,
what has been done will be done again;
there is nothing new under the sun.”
Ecclesiastes 1:9-11

Don’t ask me why, but I have always been drawn to the volatility of cycles. If I had to guess, I would say that it’s the allure of rapid change. Change can be the number one driver of investment returns – for two reasons. The first is fundamental; stocks follow earnings in the long run. Big changes, up or down in earnings, can be counted upon to drag stock prices along with them. The second is psychological. In my opinion, the most difficult part of investing is not mastering its cold analytics but rather its iron demand for a flexible mind. The challenge of finding the optimal mix of investments is never easy and never over.

Crude Oil Goes Down the Elevator

The violent collapse in crude oil in recent days shows the market’s “elevator” at work. Going down. While our research team had already meaningfully reduced the energy holdings of our most conservative model portfolios, we think that an even bigger trend may be underway that could benefit part of our more defensively positioned investments.

One broader change, that may impact the broader bond market, is a reversal in the recent trend of rising inflation. The chart below demonstrates the close relationship between the price of crude oil and the inflation rate. I think it’s reasonable to anticipate that a falling crude price, if sustained, would do much to diminish the traditional late cycle fears of rising inflation that have been weighing upon bond returns. Certainly, in the 2000, 2008, 2011 and 2014 downturns, lower crude oil prices led to falling inflation. 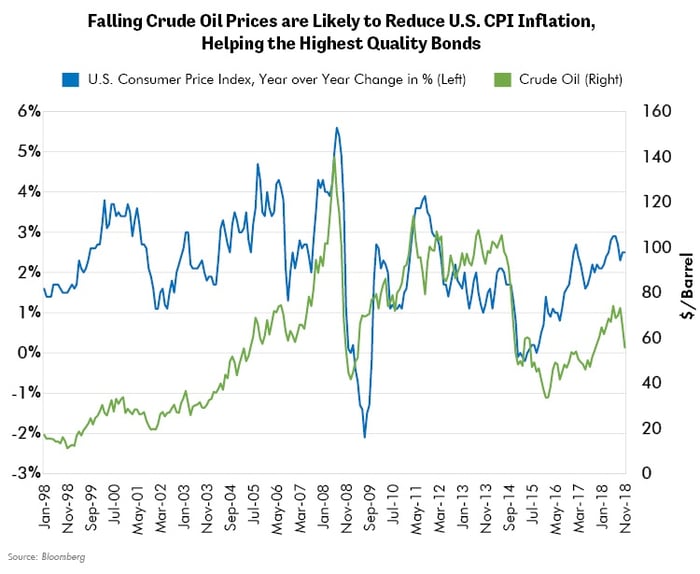 Inflation scares this deep into one of the longest cycles in post-war history should be viewed with skepticism, in our view, because of the shaky foundation upon which they are built.  Just a few days ago, many feared how the economy would cope with the inflationary pressures from crude oil prices which seemed inexorable in their climb toward a hundred dollars a barrel.  Now, it appears investors are again fearfully updating their models, only this time to the downside.   Transitory inflationary fears are being replaced with the sober realization: weaker crude oil prices could weigh upon many parts of the economy.  Think about it.

The U.S. is now the world’s largest producer of crude oil.  Trillions of dollars, much of it borrowed in the junk bond market, went into financing this production increase.  In fact, nearly 20% of the junk bonds sold in the past decade have gone to financing this production boom and its associated infrastructure.  How much of U.S. industrial production is dependent upon a strong crude oil market?  If crude oil prices remain depressed, will weaker debtors be able to honor their commitments?  What about the health of the banks who lent them money?  What about employment?  The questions are starting to mount.

Crude oil gives us just the most recent in a long line of examples of how fast things can change this late in the cycle.  It’s a cautionary tale, we believe, that points to the merits of proactive risk management.

“Take calculated risks.  That is quite different from being rash.”  General George Patton

No one wants to be a victim of the cycle.  We can all agree on that goal.  But how best to achieve it?  We have our own nuanced take on the optimal solution.

Insurance is the first thought that may come to mind when it comes to avoiding unwanted financial outcomes.  For instance, if you are worried about a hurricane wiping out your house, then you gladly insure your home.  Money leaves your pocket and goes to an insurance company to make that risk go away.  Problem solved – for a fee.

But as time goes by, those costs really start to add up.  Of course, if you were perfectly clairvoyant, you wouldn’t write that check every year, would you?  No, you would wait until the fateful year that the hurricane would wipe you out to get out your checkbook.  Sadly, we all know that the real world doesn’t work that way.  Either you commit to pay money to make that risk go away or you bear the loss.  The choice is yours.  It's an inelegant way to hedge your risk, isn’t it?

We have devoted decades of sustained thought to the question of looking for a better trade structure, a better way to manage risks. Wouldn’t it be so much better, if rather than you stroking a check to the insurance company, that it paid YOU every year?  And if the worst happened, and your home got hit, that insurance could mitigate your loss?  I wish my insurance company did that!

It's Better to Be Long the Solution Than Short the Problem

In a way, we believe that we can achieve a similar outcome in the financial markets when seeking to hedge out the risks of owning an equity portfolio into the peak of the cycle.  Like so many of the world’s elegant solutions, it hides in plain sight, protected only by the controversy that surrounds it.  We think that longer dated U.S. government bonds can act as such a hedge, which is why they play an important role for us when we seek to create a more defensive portfolio.

You need look no further than the buoyant performance of such bonds during the 2008 and 2011 equity bear markets, when they returned nearly 40% while equities fell.  I won’t repeat my arguments in favor of the bond here but would suggest that you refer to our other pieces which have outlined our thinking in detail.

One point, however, we must highlight because it goes to the heart of our risk management. We think that treasuries are a good hedge against the poor performance of riskier assets.  For instance, the chart below illustrates the ratio of the total return of U.S. high yield bonds versus that of owning U.S. government 30-year bonds.  Over the last twenty years, the return has been nearly identical! This is astounding given their vastly different risk profiles. 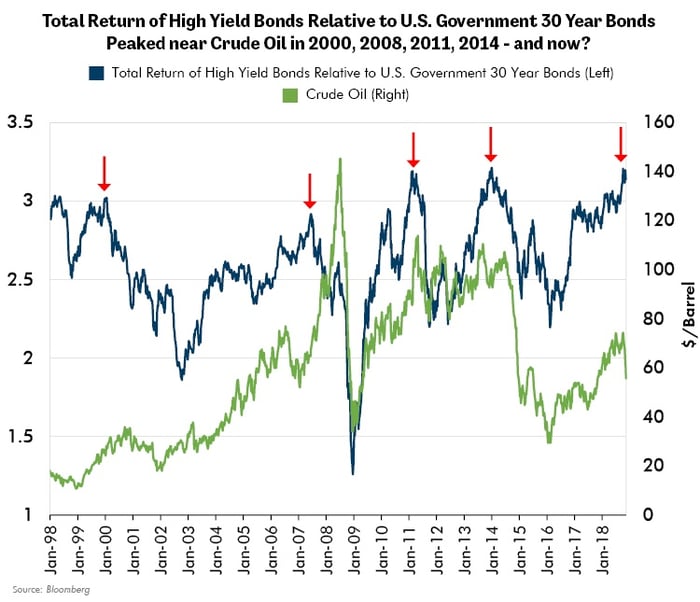 Consider, for a moment, the credit risk that investors often assume in the high yield market to achieve their returns.  Longer dated treasuries have provided almost the same return for far less credit risk. Furthermore, the chart also displays that U.S. government bonds have had their greatest periods of outperformance versus high yield bonds when crude oil prices are falling – such as they are now.  It’s my belief that these highest quality bonds will once again prove their investment merits as a valuable hedge against high yield bonds and other riskier assets performing poorly.

“By failing to prepare, you are preparing to fail.”  Benjamin Franklin

Of course, the bond accounts for only part of the defensiveness we seek when building resilient portfolios later in the cycle.  Our commitment to pro-active risk management also includes the ownership of select gold-related investments, equities that may benefit from credit distress, equities that may benefit from falling crude oil prices and those that our research team believe have less cyclical and more robust fundamentals.

I have also learned, from hard experience, that sometimes one of the best things one can do is not just to own the right things, but to avoid owning the wrong things.  Minimizing exposure to troubled areas is one of the easiest wins in proactive risk management.  The key, of course, is to move out of them before it’s obvious that they are troubled!  The best discipline for doing so, we have learned, is to be prepared to sell into enthusiastic rallies, when our research team has identified investments that it believes have a superior risk profile to the ones that we are exiting.  For our most conservative model portfolios, these cumulative changes add up to repositioning nearly twenty percent of our investments this year, making it one of the most active trading years in recent history.

The hardest task in portfolio management, in my opinion, is managing a portfolio into the peak of a cycle.  Look no further than the squeeze up and crash in the crude oil market.  Cycles are volatile.

Our solution, learned through hundreds of cycles, is to manage risk proactively.  It's times such as this that the discipline of valuation and proactive risk management can add the most value to portfolios.  We believe that the “cost” of such strategies – selling early and favoring quality to avoid the worst ravages of downcycles – is worth the “risk” of potential near-term underperformance.

Never forget that our goal is to take only the risks that our research team believes are worth taking.  As the cycle changes, the best risks to take also change.  We embrace that.  Our goal is to be early on our buys and our sells because we have seen what happens if we fall behind.  We believe this is the best way to own the best risks.  Up the escalator and down the elevator – profit from it or suffer from it.