The markets have been very busy – and volatile – the last few days.  And these days have not been altogether happy ones for many investors.  This week as I write this letter I somehow find myself writing while listening to Wagner’s “Götterdämmerung,” (“Twilight of the gods”).  Foreboding?  Pathos?  I cannot be sure.  Yet somehow it fits, as I explain below.

Frequent readers of this weekly will recognize immediately that my worst fears are materializing in Greece.  Since May – almost seven full months ago – (Big Problems Start Small, 5/21/14) we have been deeply worried about the degradation of the political environment in Greece.  Events have gone from bad to worse, to downright scary.   Last weekend the free electorate of Greece has voted into power what is effectively the Communist party of Greece.  How sadly predictable to finally see serious political blowback against overzealous austerity, as we have been warning for months (Ghosts of Invergordon?, 6/4/14).  I suppose the only real surprise is why it took so long!  But still: how in the world did it come to this?  Was Hegel right?  In this week’s “Trends and Tail Risks,” we ask the uncomfortable question of how it is that Europe has so horribly bungled events in Greece, and what it might mean for the global markets.

Ironically this story of Greek austerity fatigue actually has a parallel from long ago in Germany back in 1931.  Germany was then a once proud but literally vanquished nation.  Germany had lost the First World War.  The victors piled high a crushing burden of war reparations on Germany’s shoulders.  This critical phase of history is discussed in detail in the 2009 book by Liaquat Ahamed Lords of Finance: The Bankers Who Broke the World.

Heinrich Bruening (see below), the honored World War I veteran, was elected as Chancellor on March 29, 1930 as the leader of the German democracy.  Germany was, like all nations at the time, struggling with the enormous economic chaos of the Great Depression.  Bruening was a centrist who tried to play within the rules dictated to him by the victorious Allies.  He pressed hard upon his fellow citizens a heavy burden of austerity in order to generate the economic surplus demanded by the war reparations imposed upon his country.  He slashed government benefits.  He raised taxes.  In his effort to repay the debt burden of 100% of prewar German GDP he earned for himself the sobriquet “the Hunger Chancellor.”  In one of life’s little ironies, the debt burden inflicted on Germany is the same amount of debt/GDP with which Greece is now struggling from the German-led countries of Europe.  Perhaps Hegel was onto something. 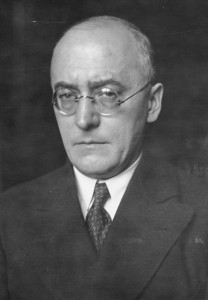 The German Parliament, unsurprisingly, pushed back against these draconian budget measures.   Gridlock prevailed.  Year upon year of skyrocketing unemployment, which peaked at one in three Germans, made its citizens desperate.  Political opportunists within Germany from both the left and right extremes benefited from the utter destruction the "victorious” Allies wrought upon the ever more discredited German political center.  Voters under pressure cried out for solutions to problems that their elected leaders were incapable of solving. Their debts were too high.  No answers were forthcoming, nor could they be without debt relief.  But imagine how difficult it must have been for the Allies to forgive the debts of a country with whom they had so recently been fighting on the battlefield?

When real answers failed to appear, could empty promises of fake “solutions” be far behind?  The Depression gave Germany’s radical fringe a voice, but the stupidity of the Allies’ harsh reparations gave these voices power.  Surely it will come as no surprise that vigorous austerity measures in Greece in 2015 have proven to be just as politically unpopular as those in Germany in 1931.  The consequences of this policy failure in 1931 would cause unthinkable consequences for the world.

Germany’s disastrous austerity policies would lead to the highest levels of unemployment among European countries during the Depression.  With the centrist voices of moderation discredited, German voters elected a lunatic.  They and the whole world suffered gravely for this incredible error.  Could early debt forgiveness have made a difference?   No one can know.  Now in real time, we watch as Greek voters in their desperation elect their own slate of radicals.  The Greek stock market is down 10% today.   The price of its 2024 bonds are down 6% today.  Remember that these bonds are held as “reserves” by Greek banks.  Many of the share prices of these banks are selling off more than 20% today as investors begin to question their solvency.  Can the specter of bank runs be far behind?

Greece’s newly elected leaders, far from striking a conciliatory tone, are aggressively lashing out across a whole host of policy avenues in Europe.  Sad as this is, the lessons of history suggest ample precedent for such destructive behavior from angry voters.   My fear is that this is one of the most intractable issues of our time.  And the stakes have never been higher.

Twilight of the Central Bank Gods?

The US is now starting its seventh year of recovery from the worst crisis since the Great Depression.  An incredible and unprecedented amount of central bank effort globally has been necessary to create even this tepid recovery.  Now the world’s confidence in its central bankers, and their ability to stabilize markets and economies, has perhaps never been greater.  But is this belief misplaced?  The struggle playing out before us may shed important light upon this.

On one side are the indignant German voters and policy makers.  They feel as though they have bent over backwards throwing good money after bad in keeping the profligates in Greece afloat.  Yet in their own anger they have forgotten that once in 1931 they stood in exactly the same shoes as their Greek neighbors now find themselves.

On the other side of the table are the Greek voters.  Greece’s long history of mismanagement put the country in the wrong place at the wrong time.  The ascendant Germans, goaded on by their unthinking EU allies, pushed upon the Greeks a retributive austerity package that has not seen a first world equal in three generations.   The recent economic experience of Greece has been both longer and deeper than the Great Depression.  The Greek people have run out of hope.  One can only imagine that the resolve of Greek voters to “do something” – no matter how counter-productive – is a feeling that runs deep.

Will this enormous struggle between electorates – German and Greek alike – finally reveal the flaw in the narrative: that of the all-powerful central banker (False Narrative: the Myth of the All-Powerful Central Banks?, 12/17/14).  My belief is that it will.  Interestingly enough, however, the market for now seems to be pricing in the belief that Greece’s problems may remain “contained” in the immortal words that Fed Chairman Bernanke used to describe the early days of the US subprime mortgage crisis in 2007.  Will those words be just as wrong this time?  Time will tell.  If so, it’s a reasonable question to ask if we are not watching the opening act of our own modern “Götterdämmerung” in which will ultimately burn the temples of the market's gods, the Central Bankers.

Certainly there is no shortage of confusion in today’s financial world.  But there is one thing on which you can count, and that is on our eternal vigilance when it comes to monitoring any contagion that may spread to our own markets from Greece. •

2. Brünnhilde is consumed by the fire during the “Götterdämmerung,” the “Twilight of the Gods” by Arthur Rackham, Source: Wikipedia

“What experience and history teach is this – that nations and governments have never learned anything from history, or acted upon any lessons they might have drawn from it.”

“This is what happens when you humiliate a nation and give it no hope.”

“You must not think that if you treat people for ten years as the German people have been treated they will continue to smile.”