The Power of Continuous Learning 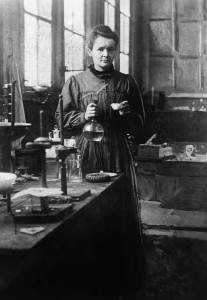 History is filled with fascinating people.  The most interesting of these, to me, are those who strove hard, refused to quit, and always kept learning.  These people are my inspiration – not because their success came easy but because by sheer force of will and dedication they overcame challenges to earn a place in history.  Marie Curie was one of these people. Marie Curie discovered two elements, Polonium and Radium, to earn not one but two Nobel Prizes – in two different fields (Physics in 1903 and Chemistry in 1911).  She is one of only two people in the entire history of the Nobel Prize to do so.

She would travel the world, receive honorary degrees, meet Presidents and be a legendary ambassador for science.  She is the only woman to earn an honored burial place in France’s Pantheon, an honor reserved for heroes of France such as Voltaire and Rousseau. Her legacy did not stop with these achievements.

Her daughter Irene would continue her family’s work on radioactivity to win the 1935 Nobel Prize, becoming only the second woman ever to win a Nobel Prize, following in her mother’s footsteps.  But the most interesting thing about Marie Curie is not her achievements, but the hard and circuitous path she had to take.  This week’s “Trends and Tail Risks” examines the life of Marie Curie to see what we can learn from her life about the science of investing.

Marie Curie was born Maria Salomea Sklodowska in Warsaw on November 11, 1867.  Even at a young age her life was a struggle.  Her oldest sister would die of typhus when Marie was just a young girl.  Marie’s mother would die of tuberculosis shortly thereafter when Marie was only ten.  The family’s expenses for her mother’s medical care were a huge strain on the family’s finances, made worse due to her father’s bad investment decisions.  Her father had invested with his brother to build a flour mill and lost his entire investment.  Her father would always bitterly regret that he could not help his children financially.  Even at a young age Marie was a strong-willed free-thinker.  As Susan Quinn outlines in her well-written book Marie Curie: A Life, her early teachers noted Marie's strong will with comments such as “Her independence is too well developed!”

Despite all these challenges, Marie grew up with a profound curiosity and a deep desire to know and understand the world.   Her whole life displays her relentless focus.  We can see in her at a very young age her incredible drive to learn and improve.  Such unrelenting work would continually build upon itself propelling her knowledge ever forward eventually culminating in her two Nobel Prizes.  Marie had an exhausting schedule of self-study even during the five years when she was a penniless governess working to support her sister’s college education.  One sample of her reading list included Daniel’s “Physics” in English, Spencer’s “Sociology” in French, and Paul Bers’ “Lessons on Anatomy and Physiology” in Russian.  She worked problems of algebra and trigonometry to hone her math skills. She was completely focused on the day when she could pursue her education abroad, since women in her native Poland were not allowed to go to college. While she was often tempted into despair during these long years of lonely self-study, she would look back on them fondly as one of the happiest times of her life.

Finally her opportunity came to move to France and attend the University of Paris, the Sorbonne, as her sister had done.  Once at the Sorbonne, she would earn two degrees and eventually her doctorate.  She was a learning machine.  For her doctorate work, she shrewdly chose among all the topics of the day to further the work of Henri Becquerel, who had made an intriguing discovery of “rays” emanating from uranium.  Hers was a brilliant choice as this field would progress rapidly and remain at the heart of the physics world for the next generation. Eventually the atomic bomb and nuclear energy would become possible through work she furthered.

Even as she reached the pinnacle of fame for her work, tragedy and money troubles continued to plague her.  Her husband Pierre, with whom she collaborated, died young in a tragic accident.  She never overcame the deep sorrow of his loss.  Within months of winning her second Nobel Prize she would unwisely (but patriotically) invest the prize money into World War I French war bonds.  These would lose effectively all of their value and keep her struggling financially for many years.  During the war she and her daughter would create a system of mobile radiological services to help battlefield surgeons.  After the war, her work ethic never flagged.  She was always the first to arrive at her lab in the morning and the last to leave at night.  In Marie Curie we see a brilliant example of the amazing achievements that are possible from curiosity, drive, and a passion to learn.

Investment Implications: Success Comes from a Lifetime of Constant Effort

As I get deeper into my second decade of professional investing, I constantly reflect on all the lessons that I have learned.  It’s very humbling to look back at good decisions – and bad ones – and to see such meaningful cumulative progress in my own learning.  Investing is the perfect field for those seeking a never-ending challenge, because to be successful one must constantly learn.  Yet even when I look back upon my most powerful successes, such as the 2007-2008 period of market turmoil, I cringe when I note the mistakes I made then that I would not now repeat.

One of the insights I had that served me so well then was my focus on the credit market.  I can see how my years of learning since then have made me a more informed investor, as my efforts since then have built upon that original foundation of knowledge.  The chart below is one such innovation that grew from my study, which is a more quantitative way to think about where we are in the credit cycle.  As the global economy slipped into what would become an extremely punishing recession, the credit market in 2007-2008 gave off important clues about where we were in the cycle.  Sometimes this market’s swings were violent and could creative havoc for those who were not sufficiently sensitive to how fast it could change, and when it was changing.  After the turmoil of the last few months, it’s quite possible that we may now find ourselves at one of those inflection points.

The inventory destocking cycle that we began to write about in May (Making Volatility our Friend: Trading the Kitchin Cycle, 5/28/14) took the world by surprise and punished those invested in weaker credits who did not understand that a storm was coming.  High yield bonds were down on the year while the premium the market charged risky borrowers doubled off of very low levels (Credit: Caught Leaning? 7/13/14).  This unexpected downdraft in demand powered strong returns in the high quality bonds that we favored (Our Bond Strategy: The Power of Duration, 10/8/14) and broke the steel (Unsustainable Steel Premiums, 9/3/14) and crude oil markets (Crude Oil's Black Friday, 12/3/14)  Now we must wrestle with a new and more challenging set of questions as we look to the future, with this recent carnage now past.  Is it time for at least a short term release of credit stress as markets normalize and come up for air as the destocking cycle winds down?  Our indicator below suggests that it could be. 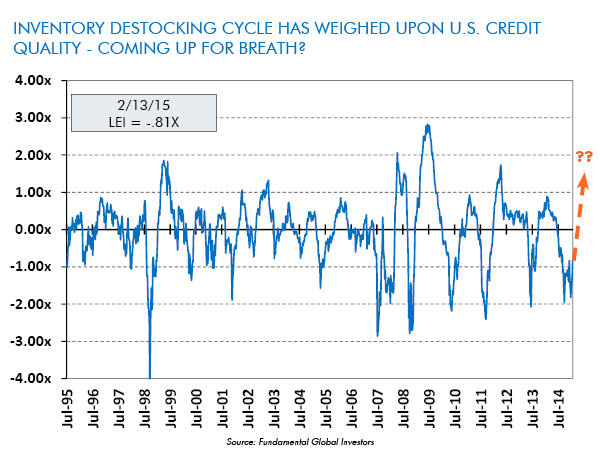 Our “Domestic Credit Quality Indicator” shown above captures changes in short term direction among the most sensitive leading indicators of credit that we monitor.  This past summer at the peak of this indicator, credit markets were complacent and the news was all good.  Now our long-held concerns about Greece (Greece: The Bank's Problem?, 2/11/15) are not solely discussed in the pages of our research but also now in the daily headlines.  Are these fears in the market finally giving us an opportunity to become more aggressive in our investments - after being the voice of caution since the summer?

Our indicator above illustrates that we may be at the beginning of an improvement in credit quality. The leading indicators of credit quality are peaking when this ratio peaks, as it did last summer into the peak of the inventory restocking cycle. Now this indicator has spent the last four months near the very oversold two standard deviation level. This means that the odds of mean reversion, which implies credit improvement, are high. This would be consistent with a turn in the inventory cycle from destocking to restocking and a move to a more broad based reflation.

We continue to believe that overindebtedness is a global issue that remains unresolved. But we cannot expect the path to this problem's resolution to be smooth. There will be many twists and turns along the way. If the credit markets have indeed passed the test of the destocking cycle, then we can look forward to elections this Fall among the EU periphery nations as the next important barrier for markets to surmount.  In the meantime, as always, we will remain vigilant in monitoring these markets, and keep an open mind for positive or negative developments.

Successful investing comes from taking the right risks, from investing in undervalued situations where values are depressed due to short term fears.  We are constantly scouring the markets for opportunities and special situations where our research has uncovered compelling investment opportunities.  As we continue our work we will keep an open mind about the changing forces at work in the credit markets.  Like Marie Curie, we hope to profit from our long sustained effort to constantly improve our craft, building a stronger base of knowledge for a more profitable future. •

“First principle: never to let one's self be beaten down by persons or by events.”
- Marie Curie

“Marie Curie is, of all celebrated beings, the only one whom fame has not corrupted.”
- Albert Einstein

“To endure what is unendurable is true endurance.”
- Japanese Proverb

“You cannot step twice into the same river, for other waters are continually flowing in."
- Heraclitus

“Change is the law of life.  And those who look only to the past or the present are certain to miss the future.”
- John F. Kennedy