Whether to Invest with the Weather

As an investor the most important decision I make every day is what to ignore.  After all, it’s a big wide world with literally tens of thousands of financial securities in it: stocks, bonds and other such claims on a company’s future cash flows.  Most of these instruments are fairly valued most of the time.  The market does a pretty good job pricing these assets at fair value.  So perhaps the highest value added decision I make every day is the 99.9% of all the things in the world that I ignore in order to focus on the 0.1% of things that look the most intriguing.  As a value investor, my best use of time is to look for situations where events – and misperceptions – are leading the market to reach a conclusion about a company’s valuation with which I disagree strongly.  Finding and exploring these instances are what make investing such an enjoyable intellectual challenge.

Prior versions of this weekly have talked about some of the means by which I generate and evaluate potential investment ideas.  And here the emphasis is on the word potential.  I probably pass on nine out of ten interesting potential investments to focus my work on what seem to be the most compelling ideas out there.  I will examine a company’s replacement cost, position in the cycle, management team, financial health and competitive position to determine if a company or sector is worth further research (“From the Analyst’s Toolkit: Replacement Cost Valuation,” 06/11/14; “Prices Allocate Resources," 06/25/14; “Balancing Insight with Timing,” 11/19/14).  Every now and then – not nearly as often as I would like – I come across interesting ideas that seem to offer highly asymmetric risk-reward: very limited downside but meaningful upside.  Today’s “Trends and Tail Risks” examines a potential set of investments that may have an unexpected catalyst from a most unusual source: the weather!  In particular, I will examine the unfolding El Niño weather pattern that is taking hold in the Pacific and ask if it may be the catalyst for unexpected change in certain markets.

An El Niño weather pattern is a cyclical event in which the Pacific Ocean warms notably and sustainably.  The chart below shows the most potent illustration of this warming reflected in the change in the Southern Oscillation Index.  The lower it falls, the stronger the El Niño.  The last major El Niño events were in 1982 and again in 1997/1998.  As the El Niño strengthens, its effects fan out noticeably across the globe, with its most potent effects felt in agriculture.  The general effect on global agriculture is to promote the higher odds of three major trends 1.) drought in the Pacific, 2.) weak Indian monsoon rain season, and 3.) warmer water off the Pacific Coast of South America. 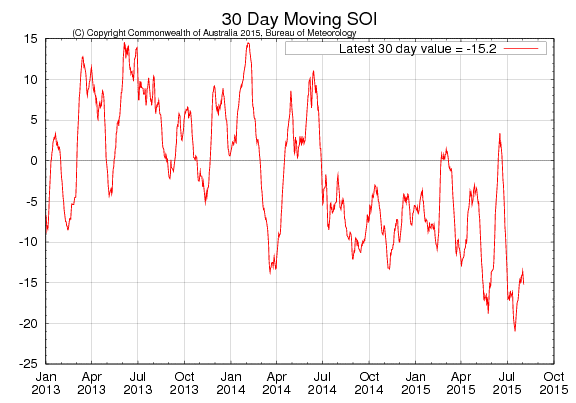 History has a number of prominent examples when this unique weather pattern has been an unexpected catalyst to change fundamentals, and the perception of those fundamentals, in a number of agricultural markets.  The best example is fishmeal.   A sustained El Niño, disruptive for many agricultural markets, could promote profitable and largely unexpected change in the fundamentals of the fishmeal sector.  Quite possibly one of the most interesting impacts is upon the small but fascinating fishmeal market.  In the paragraphs below I do a deeper dive on this market. 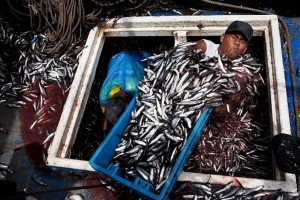 Fishmeal is largely produced from the Peruvian anchoveta and jack mackerel fishery off the coast of Peru.  Roughly 40% of the world’s trade is exported from Peru.  These small migratory fish ride the cold but nutrient-rich Humboldt current that wells up the western coast of South America from the Antarctic.  This current supports one of the world’s great fisheries: the fishing grounds of Peru.  During an El Niño this current is disturbed which can lead to plummeting supplies of fish.

Large purse sein fishing boats catch the fish and process them at plants on the coastal shore.  These plants essentially cook, dry, and press the fish they process into two products: fishmeal and fish oil.  Fishmeal has a very high protein content, 68% for the highest grades. The price trend of which is shown below.

China is the world’s largest importer of fishmeal, largely because it has the world’s largest aquaculture sector of fish-farming to feed its more than one billion people.  Fishmeal plays a key role in feeding these farm-raised fish, and is also widely used as key ingredient in other animal feeds, such as for pigs and chicken.

Wild caught fish, such as the fishery off of Peru, is the world’s lowest cost source of animal protein.  So it is always in demand. Recently, many fishmeal producers have upgraded their sales from lower-valued-added fishmeal to higher valued added fish for human consumption, such as canned or frozen fish.  Emerging markets in particular have been a growing source of demand for many years.  Such higher value added demand keeps up the pricing pressure on fishmeal.  Fishmeal prices have been high and rising for many years as the market uses higher prices to ration demand to the available supply.

An unexpected catalyst of falling supply from an El Niño could lower the available supply of fishmeal to such an extent that price may have to rise meaningfully in order to ration demand.  Certainly extreme El Niños have driven dramatic price increases such as during the 1972 El Niño.  Shareholders of publicly traded companies who operate outside of Peru could benefit from an unexpectedly strong El Niño  that shrank supply aggressively.  I am monitoring this developing trend.  My research has identified a few companies who would benefit from this potential new trend. 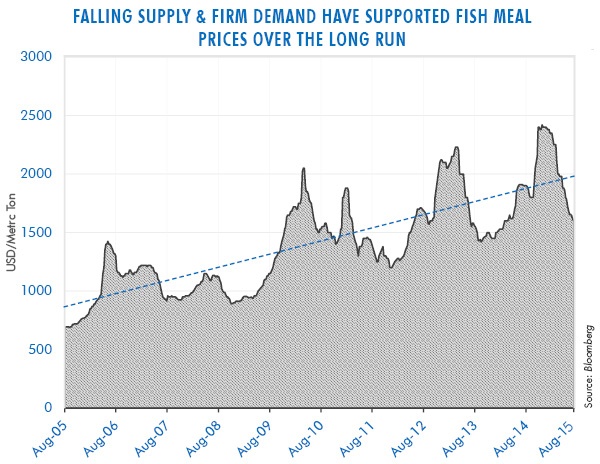 I wanted to highlight potential events underway in these niche markets to demonstrate a few important principles that always ring true in our research process.  First, fishmeal is an interesting niche market that few follow and even fewer truly understand.  This market can offer profitable opportunities from time to time to those who understand its fundamentals.  Second, this example highlights the kind of potential “set-ups” that can offer the best risk/reward in investments.  By set-ups I mean investments that offer multiple ways to win, most of them unexpected.  For instance, the potential surprise development of rapidly falling supply that could take place during an El Niño and the upward pressure this would likely exert upon fishmeal prices.  This is one example of how an unexpected tailwind could surprise the market and lift asset values in this sector.  The more optionality a company has to unexpected favorable events, the better.  No one, of course, knows the future.  But it’s been my experience that the more ways that you have to win, the higher your odds are of having a catalyst break your way!

Ideally, the investments that I explore the most deeply have a dividend that the company earns even in a time of stress.  It’s always a plus when I can get “paid to wait” on the maturation of an investment thesis.  It’s so very easy to be early when investing.  Cheap stocks can – and do – get cheaper!  A nice dividend can help me be patient and limit the downside while I wait.  Such companies tend to be low cost producers who can make it through even the most challenging of down cycles.

Finally of course, and most importantly, no investment stratagem is complete without an undervalued asset at its core – whether a stock or a bond or even a commodity.  The single biggest determinant of long-term investment results is the price at which you make your initial investment.  One of my favorite valuation metrics is replacement cost, or sum-of-the-parts, which is an analysis of the asset value of a company versus its valuation in the marketplace.  A program of buying assets when they are undervalued and patiently holding them has proven to be a winning strategy for some of the world’s most accomplished investors.

My goal is to research potential set-ups such as I outline above.  It can be a laborious task to weed through the vast majority of those that are merely interesting, to find the small minority that are compelling!  Even then, a compelling and highly optional setup is sadly no guarantee of investment success.  Over time, however, it has been my experience that a diversified portfolio of such thoughtfully researched and high optionality investments is one of the best ways to profitably confront an uncertain future. •

"One of the most important things is learning what to ignore."– Unknown

“Be yourself: everyone else is already taken.”
-Oscar Wilde

“If you buy it right it's half sold!”
-Long-Accepted Wisdom of Retail Buying Agents

“The sovereign ability consists in knowing thoroughly the value of things.”
-La Rochefoucauld

“All good things are cheap; all bad are very dear.”
-Thoreau

“On the day of victory no one is tired.”
-Arab Proverb

“In other localities certain places in the streams are much better than others, but at Niagara one place is just as good as another, for the reason that the fish do not bite anywhere.”
-Mark Twain

“Men go fishing all of their lives without knowing that it is not fish they are after.”
-Thoreau

“The charm of fishing is that it is the pursuit of what is elusive but attainable, a perpetual series of occasions for hope.”
-John Buchan