Catalonia, an autonomous community within Spain, has voted for independence.  Spain’s government is cracking down.  How will it end and what does it mean for global markets?  Our concern is that the global challenge to the political status quo is on particularly explosive grounds in Europe, whose long-festering structural weaknesses have been causing problems since 2010.

Clients and friends know I am an avid student of history.  Over the years, my studies have broadened from markets to politics.  And that’s for good reason: politics are the ultimate arbiters of economics.

More than a decade ago, I reached the conclusion that the Global Financial Crisis was setting into motion a political sea change that had the potential to upend much of what we thought we knew about the status quo, property laws, and what was “fair.”  Accordingly, I began to study the major political upheavals of the western world, focusing especially on the 1930s.

This led me to George Orwell’s “Homage to Catalonia”, a book about the Spanish Civil War that broke out in 1936 between the socialists and their nationalist adversaries.  Headlines today suggest that history may be rhyming in Catalonia.  In today’s “Trends and Tail Risks” we examine Orwell to see what insights we can learn from him. 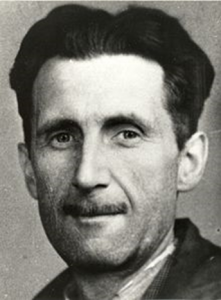 George Orwell is one of my favorite authors.  He is quite possibly one of the most interesting characters of the 20th century.  Many graduates of the U.S. high school system recognize his name because they were required to read “Animal Farm,” one of the most scathingly critical books ever written about socialism.  What most do not realize however, is that Orwell began his political journey as an ardent Socialist!  That’s what makes him so interesting.

George Orwell was his pen name.  He began life as Eric Arthur Blair born in 1903 in British India.   After deciding to pursue a career of writing, he chose to get close to the subject that fascinated him the most – the plight of the poor.  Inspired by the writing of Jack London, he embraced a life of poverty.  Many of his early books would include the struggles he shared living with the poor and his arguments in support of Socialism.

The Spanish Civil War broke out in 1936 with a failed coup by military nationalists to overthrow the duly elected socialist government.  Orwell’s ardor led him to volunteer to fight for the socialists. He wrote of his experiences in “Homage to Catalonia,” which is an excellent book I heartily recommend.  During the conflict, Orwell was shot in the neck by a sniper and nearly killed.  The militia, with which he fought, was condemned by a rival communist group in the tumultuous politics of the day.

Orwell fled Spain to escape their wrath and watched from abroad as the former comrades with whom he had fought suffered the indignity of a sham trial.  The leading communists of the day, once Orwell’s backers, quickly began to hate him because his book raised uncomfortable questions about their struggle in Spain.  That marked the beginning of Orwell’s disillusionment with socialism.

Orwell’s health had deteriorated greatly, such that he could not join the English military when World War II broke out.  However, he helped the war effort by working on propaganda for the British Broadcasting Corporation.  Orwell’s crowning work was the dystopian “1984” which drew upon so many different aspects from his highly unusual and eventful life and left a legacy of true literary brilliance.  Do yourself a favor and read as many of his works as you can.

A New Chapter of the European Crisis Unfolds in Catalonia?

Clients and friends will recognize that we have been concerned with political events in Europe for many years.  Before it captured the headlines, we wrote about political change in Greece and how that could unexpectedly destabilize markets.  In May of 2014 we wondered if weakness in the Greek bond market was the market worrying about regional elections which favored political insurgents running on a platform of re-negotiating the controversial terms of Greece’s earlier bailout (Big Problems Start Small).

In the summer of 2015 the raw power of the status quo was unleashed against the Greek upstarts.  In response to a popular referendum that rejected the terms of Greece’s bailout, the European Central Bank announced that it was limiting its funding of Greek banks, which were dependent upon its financing.  Instantly, the Greek banking system was effectively insolvent.  Lines formed at ATMs overnight with depositors desperate to get access to their money.  The banking system was closed to prevent its total meltdown.  The rebellion against the status quo that began in Greece was stopped in its tracks.  But, perhaps, only for a while.

Years have gone by but still the aftershocks from this revolt against the political status quo continue.  And it has spread immeasurably.  Before the U.S. election results that shocked many observers, we wrote “A Bull Market in Populism and De-Globalization,” noting our expectation that the political upheaval which began in Europe – in Greece and UK’s “Brexit,” would spread to our shores as well. It did with the election of Donald Trump. This trend now continues again in Europe with the unfolding constitutional crisis in Catalonia.

Certainly, it was not my expectation that the markets would embrace these events with runaway enthusiasm!  We appear to have the markets of the 1990s but the politics of the 1930s.  That’s an unprecedented and counter-intuitive combination.  And it’s one that worries me greatly.  Many years in the markets have shown me many times that events don’t matter until they matter.  Then they matter a very great deal indeed – if you are following closely the development of a truly important trend.

What is Unfolding in Catalonia?

Over the weekend, Spain’s autonomous community of Catalonia held a referendum with a majority voting for its independence from Spain.  The status quo, in a tone deaf and appalling show of force, sent in black-clad police in riot helmets who beat defenseless women, children and the elderly in an attempt to prevent them from voting.  The government of Spain is trying to cloak these actions in the precise language of political legitimacy but the viral videos of beatings tell a simpler and more profound tale.

These events seem, in isolation, like a simple if tragic blunder of political heavy-handedness.  However, seen in their fuller and more proper context, we can easily see yet more evidence of the now established trend of a terrified European status quo responding with overwhelming force.  A reasonable question: what are they so scared of?  I believe the answer is that Europe’s politicians have come to understand how deep the flaws of the Euro are.  Their fear of its weakness is what is driving them.  After many years of my own study of the situation, I understand why they might be scared.

The chart below asks a question with which I have been wrestling. 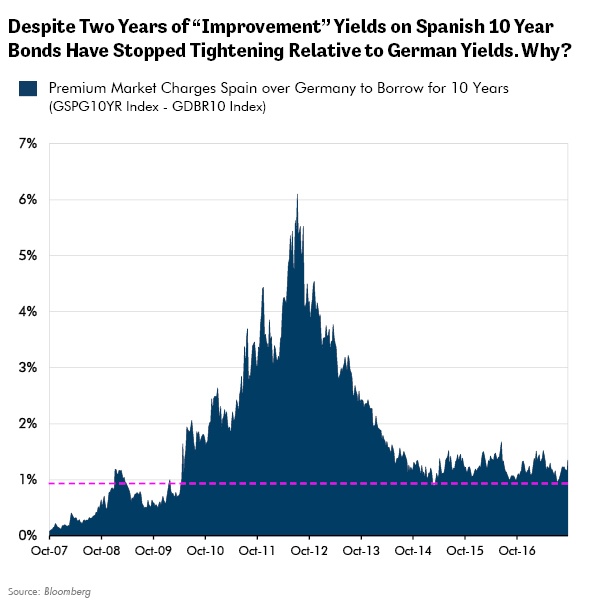 Clearly the market has priced in a huge improvement in Spain’s prospects since the European Debt Crisis of 2012.  But it is curious that we have seen no improvement at all since 2014 in this market-based gauge of Spain’s creditworthiness.

Another disturbing sign is that, once more, Spanish banks are at the depressing down-trend of their long-term underperformance.  The last four prior times, Spanish banks have failed in their rally and resumed their downtrend.  Will the fifth time end any differently?  A reasonable question to ask would be if these unfolding events in Catalonia may mark the beginning of a deeper challenge for Spain’s markets and by extension its banks.  Certainly this trend line has defeated the hopes of prior rallies.  Global investors will want to monitor these events for an early read on the health of the “reflation rally” that began with Brexit and has now driven Spanish banks to a point of historic resistance. 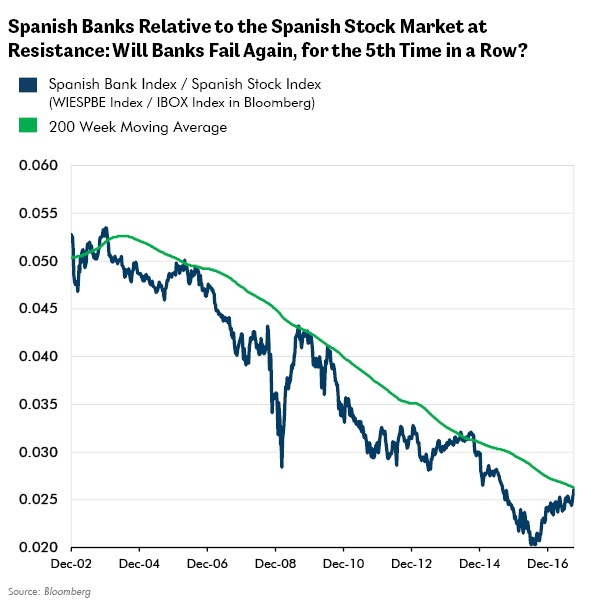 Europe and its flaws have remained at the forefront of our concerns for three years now.  Our chief concern is that the potentially flawed structure of the Euro currency places an increasingly fragmented Europe at great risk.  The U.K. could have a painless “Brexit” only because it has its own currency.  This option is not available to most others in Europe.  Other countries who seek to leave the Euro – or who are themselves forced out – may find that their path looks a lot more like the painful one of Greece.

Small political events may have outsized economic consequences for those countries who have adopted the Euro.  We believe that there is a tragic flaw in the Euro and that this may explain the increasingly desperate actions of the European status quo.  We should not underestimate how far it's leaders are willing to go, nor should we underestimate the economic consequences should they fail. •

"The thing that had happened in Spain was, in fact, not merely a civil war, but the beginning of a revolution."
- George Orwell’s “Homage to Catalonia”

"History is a child building a sandcastle by the sea, and that child is the whole majesty of man's power in the world."
- Heraclitus

"Aspects of 1930s Spain still seem all too similar to many countries today: the great gap between rich and poor, and the struggle between an authoritarian dictatorship and millions of powerless people long denied… These things make Spain of the 1930s, a crucial battleground of its time, a resonant one for ours as well."
- Adam Hochschild

"[A neoconservative is] a liberal who has been mugged by reality."
- Irving Kristol

"I think the pacifists might find it helpful to illustrate their pamphlets with enlarged photographs of lice. Glory of war, indeed!  In war all soldiers are lousy…"
- George Orwell’s “Homage to Catalonia”

"Growing up is losing some illusions, in order to acquire others."
- Virginia Woolf

"Why do we call all our generous ideas illusions, and the mean ones truths?"
- Edith Wharton

"It was worse than a crime… it was a blunder."
- Talleyrand