Every day it seems I am reminded that there are so many things that investors must understand if they hope to navigate the markets safely and profitably.  One thing is clear: an investor can never stop learning.  One of my goals in writing this weekly is to share the resources I have found to be useful in my own never-ending journey toward a deeper understanding of the markets.

In previous publications, I have profiled the life and methodology of legendary equity investors, such as storied deep-value investor Ben Graham or equally famous Phil Fisher, who pioneered the science of growth stock investing (“Price is What You Pay, Value is What You Get,” 07/09/14; “The Value of Patience,” 11/26/14).  Even investors from antiquity, such as Richard Cantillon, who made multiple fortunes during the tumultuous global bubbles of 1720-1721, have lessons for today’s investors ("Heroic Investment Performance," 1/21/14).  Equities, however, are literally only part of the global market for financial securities.  The bond market is actually far larger than the equity market.

It is only appropriate that we study a legend of the bond market in order to more deeply understand the credit market, the biggest of all asset markets.  Sidney Homer is that legend.  Today’s bond investors can call upon the cumulative knowledge of such experts as Mr. Homer in the quest for safe and profitable bond investing.  This week’s “Trends and Tail Risks” explores the life and achievements of bond legend Sidney Homer, who is known as the father of bond market research.

Sidney Homer, the first director of bond research at Salomon Brothers, was sometimes called the “Bard of the Bond Market.”  His path-breaking bond scholarship set the bar high for everyone who would come after him.  His deep insights earned him an induction into the Fixed Income Analysts Society Hall of Fame.  But the early life of young Sidney Homer would hardly have suggested such an outcome for his career.

Young Sidney was the child of two noted artists.  His mother was a famous opera singer, and his father a distinguished classical composer.  Sidney’s own musical talent lay in the piano.  The wit and artistic ability of his parents no doubt played a role in Sidney graduating from Harvard in only three years with a degree in the classics and philosophy.

His career on Wall Street began in 1923.  His unique perspective led him to look at things differently.  Mr. Homer was a deep student of history and was known for his ability to explain a complex topic simply.  This talent would serve him well as the bond market underwent a revolution during his time on Wall Street.  I have always admired the rigor and depth of Homer’s work.

For instance, in Homer’s epic 800 page A History of Interest Rates: 2,000 BC Until the Present, he covered four thousand years from ancient Mesopotamia until the final edition in 1990.  It is filled with charts of prevailing interest rates and tales of how buyers and sellers created promises to receive and repay money over long periods of time before coins, banking or industry existed.  This book represents one of my most heavily thumbed and referenced resources when analyzing the global bond market.  His work has no equal in either breadth of time covered or depth of information contained.  No bond investing library is complete without it.

Homer perfected his bond market knowledge with many other books and publications.  Perhaps one of the more famous of these works, Inside the Yield Book, he co-authored in 1972.  Nixon had just devalued the U.S. dollar on gold terminating the gold standard and launching the world into a strange new world of floating currency values and increasingly volatile interest rates.   Homer’s great passion was to shine the light on truth on the market to dispel long-held myths about how to value bonds and their trading on the secondary market.  This book rapidly became a classic and earned its place as the reference book for every young bond trader.  Homer’s passion was to explain the simple truths of the bond market.  His insights gave traders and investors a deeply quantitative set of tools with which to address even the most challenging questions in the bond market. 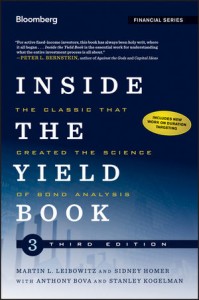 Homer was an entrepreneur as well and was comfortable taking risks.  At the very bottom of the Great Depression he launched his own bond firm, Homer & Company, which prospered for a while before World War II intervened.  After the War, at age 59, Homer joined Salomon Brothers as a partner in this storied bond firm.  It was at Salomon that he became Wall Street’s first real director of bond research.  He would go on to hire and groom those who in their own time would become legends of the bond market, such as Henry Kaufman, who earned the sobriquet “Dr. Doom” during the prolonged bond bear market of the 1970s and early 1980s.

Investment Implications: A Wealth of Information in the Yield Curve

The foundation of bond market analysis begins with the idea of a risk-free interest rate that is assumed to be the prevailing interest rate on sovereign government debt.  U.S. sovereign debt, for instance, comes in many different maturities, from as short as four weeks to as long as thirty years.  Each interest rate at each maturity signifies the risk-free rate for that length of time.  From these interest rates, we can construct a yield curve which contains deeply relevant clues to the health of the economy.

If we examine the yield curve in the U.S., we do find a few indicators that suggest growth may be more tenuous than many anticipate.  Let’s examine this topic by studying the spread between the interest rate on U.S. government five year bonds versus the prevailing interest rate on U.S. government thirty year bonds.  One of the jobs of the bond market is to properly anticipate – and in fact to set – the cost of borrowing money.  The market does so every day at every maturity. The differences in these rates, by maturity, contain clues about the market’s expectation for future growth.

The chart below illustrates the yield of the five year U.S. government bond as a percent of the thirty year interest rate.  The trend of the last few months has been for five year yields to fall as a percent of the thirty year bond yield.  The market has signaled a sustained downturn in the past once five year yields turned down for good.  I think it’s still too early to name this developing decline as a major inflection in economic activity.  But big trends start small!  The yield curve is one of the most sensitive indicators out there.  So it would be wise to keep a wary eye on it.

A few other trends are noteworthy in the chart below.  One is the remarkable depths from which five year yields began to rally a few years ago.  My own personal belief is that this long-delayed recovery was a direct outgrowth of the scope of the preceding collapse.  It’s important to note that each downturn has seen short-term rates fall lower and stay there for longer.  Perhaps this pattern confirms my fear that the economy is secularly over-indebted?  If so, the dead hand of high debt levels may continue to press down upon growth rates and lead to shorter and weaker economic recoveries.  If that should prove to be the case, “unconventional measures” from central banks - such as quantitative easing (QE) – may be more pervasive than most currently anticipate.

I remember quite well the alarming pace of the 2007 collapse as short-term U.S. government bond yields crashed in the late summer.  Many investors watched and wondered what it meant.  Something tells me that Sidney Homer, and students of his work on the yield curve, would likely have understood.

What would Sidney Homer say about the prevailing world of interest rates today?  Would he be shocked at the recent appearance of negative nominal interest rates?  What about the almost unprecedented length of the bond bull market that began in 1983, nearly three full decades ago.  Could he help us understand the true message of the trends now underway in the U.S. yield curve?

One thing is for sure, Sidney Homer has left the bond investors who follow after him a rich legacy of historic data and the quantitative framework with which to understand that data.   Bond investors today are truly standing of the shoulders of a bond market giant.  If, as investors, we make the very human mistake of misinterpreting the data, we have only ourselves to blame.  Give credit where credit is due: to Sidney Homer, who has armed bond investors with the tools they need to profitably navigate the bond markets.•

"An investment in knowledge pays the best interest."
-Benjamin Franklin

“I used to think that if there was reincarnation, I wanted to come back as the president or the pope or as a .400 baseball hitter. But now I would like to come back as the bond market. You can intimidate everybody."
-James Carville, Advisor to President Bill Clinton

“It is remarkable…what a change of temper a fixed income will bring about.”
-Virginia Woolf, A Room of One's Own

"When I was young, I thought that money was the most important thing in life; now that I am old, I know that it is.”
-Oscar Wilde

"At cocktail parties lovely ladies would corner me and ask my opinion of the market, but alas, when they learned I was a bond man, they would quietly drift away."
-Sidney Homer

"Investing should be more like watching paint dry or watching grass grow. If you want excitement, take $800 and go to Las Vegas."
-Paul Samuelson